Will Hope turn out to be Josie’s knight in shining armor? TVLine has an exclusive first look at Legacies‘ March 26 episode (The CW, 9/8c), in which “Hope infiltrates Josie’s subconscious and finds herself in a fairytale world filled with dark magic.”

From the looks of things, Josie is living out her full cursed-princess fantasy, while Hope is taking on a Little Red Riding Hood-type role. And is that one of the Three Little Pigs I see behind Hope there? Delightful!

Now for the question we’re all wondering: Given the way sleeping curses are usually lifted, are Hope and Josie about to kiss? It wouldn’t be without precedent, considering both characters have admitted to liking the other; Josie’s intense feelings resulted in her accidentally starting a fire, while Hope’s crush was a bit more fleeting.

“I always knew that Hope was pretty sexually fluid, so that didn’t shock me,” Danielle Rose Russell told TVLine of her character’s feelings for Josie. “If it ever makes sense [for them to get together], it makes sense. If it doesn’t, it doesn’t.”

Kaylee Bryant added, “It’s rare for the lead of a show to even be considered with a female, or considered that she could possibly be bi or pan or otherwise not identify as straight. The fact that that’s actually a conversation in the fanbase without the thought of it being strange is exciting to me. I think it’s fantastic.”

Scroll down for another exclusive shot from Legacies‘ fairytale episode, then drop a comment with your thoughts below. 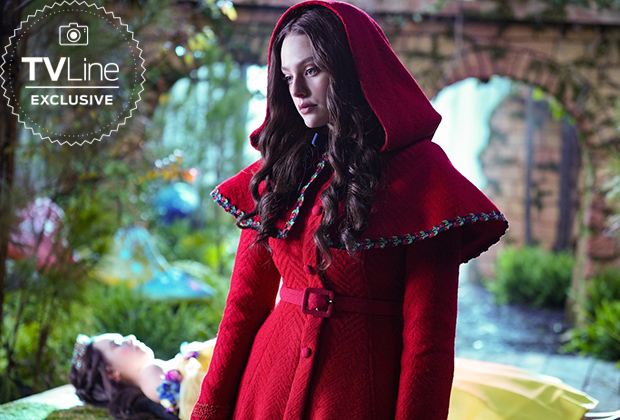