Early on in the Insecure Season 4 trailer dropped Thursday by HBO, Issa (played by series co-creator Issa Rae) shares with bestie Molly (Yvonne Orji) her sad state of affairs. “It’s like, no job, no man… ” Then she realizes, damn, “all of this sounds bad.

“But,” she hastens to add, “it’s actually really good.” We believe her. Kinda. When the beloved dramedy returns April 12 (at 10/9c), our heroine will be looking for work after quitting her unrewarding gig at We Got Y’all in Season 3, coping with ex-boyfriend Lawrence’s new boo and staring down her disgruntled mirror self, whose existence she describes as, “like your life but worse.”

On the plus side, Issa has a new personal assistant named Sapphire — seriously, wait till you meet her in the clip. Molly’s new romance is “all good sex and witty banter, but… ” — because, you know, there’s always a “but” with her. Kelli (Natasha Rothwell) sees a chance to make some serious coin via an Indecent Proposal scenario. And new parent Tiffany (Amanda Seales) is back with her gal pals since, as she puts it, “I’m already over my mommy friends.” 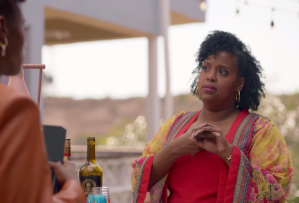 Per the show’s official logline, Season 4 will follow “our favorite characters as they evaluate their relationships, both new and old, in an effort to figure out who and what comes with them in this next phase of their lives.”

To check out the trailer — and get introduced to Sapphire — press PLAY on the video above. Then hit the comments. Are you hoping Issa will get back together with Lawrence? Or has that ship sailed (and sank) already?