I’ve made no secret of my contempt for A Million Little Things‘ Eddie and his poor life choices. Though David Giuntoli, who plays him, is the cat’s pajamas, I’m #TeamKatherine all the way… and I still don’t understand how she found it in her to take him back after the whole Delilah debacle.

Anywhooo, bygones, right? Except this week we creep closer to the revelation that Eddie maybe played a role in someone’s death, back when he was drunk most of the time. (Jon, who pops up in several characters’ dreams this ep, is instrumental in pointing Eddie to this realization.) I’m sincerely hoping that’s not the case, and that this is just another one of the show’s misdirects. Because if Eddie is a best-friend’s-wife-shtupper, a formerly unfaithful husband and an inadvertent murderer? Three strikes, dude.

Read on for the highlights of “One Year Later.” 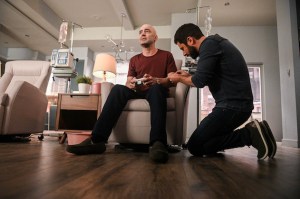 OH HI, JON! | Jon first appears in Gary’s dream, bald and seeming to receive chemo while playing video games at Gary’s apartment. When the IV comes out of Jon’s arm, Gary can’t seem to figure out how to fix things. Then Maggie in her ski cap appears and sadly asks, “Is this really what you want?” Gary is confused and upset, then Jon says, “Too late, Gary. It’s over.” Then Gary wakes up, unsettled and breathing heavily.

Later one, he meets Rome and Eddie for some basketball. It’s the anniversary of Jon’s death, and everyone is supposed to gather for dinner at Delilah’s. But Eddie wonders if he should attend, given how much Sophie still hates him. Meanwhile, Rome is preparing to take his dad to his first therapy appointment that afternoon. “That shrink’s gonna need a shrink,” he quips. 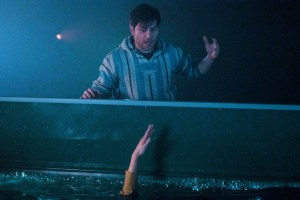 Their chill game soon turns into a giant Gary freakout about how everyone but him has turned their lives around in the year since Jon died. The meltdown is awkward and awful, and Gary apologizes when Eddie later finds him in the stairwell. Ed mentions that he, too, had a dream about Jon the week before: They were both in a rowboat at night, and when Eddie stood and reached for a beer, Jon fell into the water. But when Eddie reached for his friend, “It wasn’t him. It was this girl’s hand reaching out to me,” he recalls, adding that the woman’s hand had teal nail polish on it. Gary dismisses it as no big mystery: The girl represents Sophie, “and the beer is because you’re an alcoholic,” he says, all chipper.

WALTER AND ROME’S NEWEST BATTLE | At Walter’s place, Rome’s dad confronts him about his script: “The cover says, ‘Based on a true story.’ So is it true?” he wonders. “The part about you taking all those pills?” Rome admits that yes, he tried to kill himself, but he’s in a better place now. But Walter is mad that Rome is advocating therapy “when you can’t even talk to your own father!” Rome fights tears as he wonders why his dad, upon learning about the suicide attempt, didn’t immediately wonder if his son was OK. Disgusted, Rome leaves and heads straight to Maggie’s office, where he forces her to give him an informal therapy session by bringing her a smoothie. But when she starts to cry, he wonders what’s up. And that’s when she tells him that she got the Oxford fellowship, and “for the first time in my life, I’m not sure I want to leave.”

Meanwhile, Regina swings by Walter’s to tell him to get his head outta his tush. “He didn’t tell me, either,” she confides, but adds that she got over her anger at her husband because he needed her. “And he needs you, too,” she says. “I think you’re scared to look too closely at him because you might end up seeing yourself there.”

Much later, Walter comes to Regina and Rome’s apartment with a peacemaking gift: glow-in the-dark stars for the ceiling of the nursery, just like he put on Rome’s ceiling when he was a kid.

THE STANDOFF ENDS | As people start to trickle into Delilah’s various side conversations reveal new bits of information. Gary slept with Becky from laser tag, but then he ended it and now is having a crisis about how to fix his life. Eddie encourages Katherine to open her own law firm. Sophie tells Eddie he ruined music for her forever. Gary points out to Sophie that Jon made some pretty big mistakes, too, but that “I will not let that one thing undermine all the other things that he did for me. You can’t let one mistake define a person.”

So Sophie softens and takes Eddie to the cemetery to visit her father’s grave. She stands to the side while Ed cries and apologizes for everything that went down, then he plays her dad’s last voicemail, the one where Jon encouraged the friends to “love each other.” She smiles. “If that’s what he wanted, then I think he’d be pretty happy, because that’s exactly what we’re doing.” They hug.

Back at the house, Gary has his second most awkward moment of the day when Maggie interrupts him in the bathroom. (Don’t worry, he’s just washing his hands.) He tells her that he was “broken” when they met, “and instead of dealing with that, I tried to save you the way I couldn’t save Jon.” She won’t let him take all of the blame, saying she was broken, too. All in all, it’s stuff they both needed to say to each other… and there’s certainly other things they want to say but aren’t… but it’s just weird that they’re doing it right next to the hand towels, right?

WHAT REALLY HAPPENED TO ALEX? | Sophie and Eddie return, all smiles, just as it’s time for dinner. Theo once more proves he’s an old man in a kid’s body by giving a toast that a 40-year-old would think was too mature; later, in the kitchen, Delilah cries a little and tells Maggie that she thinks that with everything that happened, she never fully had the chance to mourn her husband. 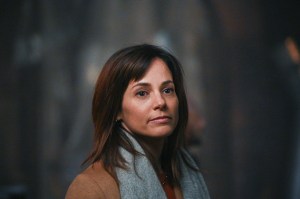 Later, the gang all heads over to Someday. Well, they go to the storage space directly above Someday. Delilah and Regina announce that they want to give the space to Katherine to start her own law firm, and she’s overwhelmed and touched. “You gave me my house,” Delilah says. “The least I can do is give you an office.” Katherine gratefully accepts, saying that though Jon used to be the only member of the group who made her feel comfortable, that’s not true anymore. “You really are like family to me,” she says, beaming. She’s even happier later when she and Eddie decide they’re going to renew their vows on their upcoming 12th anniversary.

Eddie’s joyful high is cut short later, though, when they’re at home. He sees Katherine painting her nails and it jogs his memory a little. He has a flash of a woman putting on teal nail polish and saying hi to him, so he calls Lindsay. “I had a dream about Alex, and I need to know what happened the night she died,” he says, worried.

DREAM DATE | But let’s not end our recap on such a grim note. After the Howards confer about Gary and Maggie and how they’re still in love with each other, Rome tells Gary about Maggie’s Oxford fellowship. And Regina tells Maggie that Gary actually sent the bottle of wine after her failed blind date a while back because “he’s still in love with you.”

But Gary is also in love with the idea of moving on. So by the end of the hour, we see him grabbing a drink with Darcy, Theo’s friend’s mom he met in the previous episode. And the phase “fresh start” might just come out of his mouth while they’re chatting…

Also: Delilah eventually has her own dream of Jon, who shows up to tell her to answer the calls she’s dodging from Miles, the guy she met at the bar. Jon gently tells her that she has to let him go, and that seems to bring her some peace.