The final Masked Singers group of Season 3 is in the house, y’all! Throw your hands in the air, wave ’em like you just don’t care, and — OH GOOD GOD FROM WHAT HELL DIMENSION DID NIGHT ANGEL ESCAPE?

Sorry for that momentary freak-out, but the purple visage of one of the new Group C competitors is the stuff of nightmares. And Rhino is an old-timey avaiator? And T-Rex is wearing a doublet for some reason?

It’s a turvy-topsy world, friends. Read on for the performances and — of course — who got booted (and who they were). 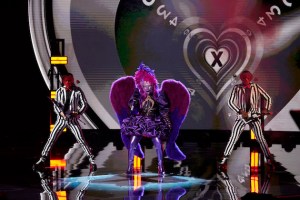 NIGHT ANGEL | “By far, the best performance all season,” judge Jenny McCarthy Wahlberg said after the very talented singer in the highly disturbing mask performed Bon Jovi’s “You Give Love a Bad Name,” and she wasn’t wrong: Night Angel’s strong alto and stage presence made for a highly watchable performance. Clues from the video package included: four grandmas (or is that Grammys?), magic and a motel. Oh, and she appears to have a British accent, too. (My guess: No clue, but a bunch of people on Twitter are thinking former Xscape member Kandi Burruss, so I’ll glom onto that.) 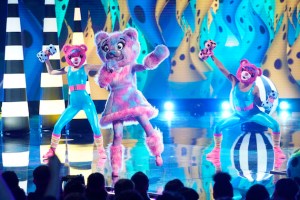 BEAR | Bear’s set-up video seemed to indicate that she’s been the target of criticism, but that anything she does to rub people the wrong way is in service of her “cubs.” There also were some hockey skates, a radio and some playing cards (which Wahlberg pointed out was a full house, but the more poker-minded of you out there will have to verify that). She rapped Sir Mix-a-Lot’s “Baby Got Back” and seemed to have a lot of fun with it… wait, could this be… (My guess: Former vice-presidential nominee Sarah Palin?)

ASTRONAUT | Things I don’t know: How the person inside this costume can see out of it, and who that person is. He sang Lauren Daigle’s “You Say” and certainly sounded like someone who has previously taken the stage as a vocalist. But the clues (a lei, a skeleton foot, a toolbox, “code blue,” “I started at a young age,” etc.) didn’t scream anyone in particular to me. (My guess: No idea. I’m killing it tonight, guys.)

T-REX | What T-Rex lacked in pitch accuracy, she made up for in insane amounts of energy, starting from the moment she danced out on stage. The feeling continued all the way through Pink’s “So What,” which unfolded exactly the way it did that time your tipsy best friend cued it up at karaoke: lots of high kicks, not a whole lot of vocal talent. I’m intrigued, though, by T-Rex’s story about being “plucked out of obscurity” and competing against a dozen others like her — the clue video sure had a reality-competition feel to it, no? (My guess: Dance Moms kid-turned-YouTube starJojo Siwa.) 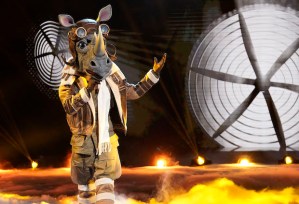 RHINO | The horned one had a bunch of country-music clues in his video, including a giant guitar marked with Grand Ole Opry. But he looks and feels like an athlete, even though his rendition of John Hiatt’s “Have a Little Faith in Me” was surprisingly affecting for someone who maybe doesn’t sing all the time. (My guess: Former collegiate football phenom/NFL quarterback Tim Tebow?)

SWAN | Not gonna lie: Swan’s tendency to over-enunciate and to speak in obtuse verse during her clue package made it tough to get a bead on who she is. That oddly stiff performance of Peggy Lee’s “Fever” didn’t help, either. (My guess: Maybe 9-1-1‘s Jennifer Love Hewitt? Maybe?)

THE UNMASKING | Bear was revealed to be Palin.