For Arrow‘s series finale in January, Oliver Queen’s funeral was well attended by superfriends old and new. Among those paying their respects were Oliver’s not-wife Nyssa Al Ghul, whose presence set the stage for a reunion with her onetime love, Sara Lance — the ladies’ first time together on-screen since, I want to say, an October 2015 episode of Arrow.

Nyssa proceeded to introduce her sister, Talia, to Sara aka “my beloved,” eliciting a hint of a knowing smile from the Waverider captain. The reunion, though brief, did what it needed to do — bring Sara and Nyssa together with just enough acknowledgement of their history and chemistry that it never did a disservice to what Sara has going on with Legends of Tomorrow love Ava Sharpe (Jes Macallan).

During our recent chat with Law (about CBS’ Hawaii Five-0 and its own upcoming series finale), TVLine also dove into her Arrow encore and the care that went into the long-awaited “Nyssara” reunion — and whether another run-in might take place on Legends.

NOTE: The first exchange is carried over from our Five-0 Q&A with Law, in case you feel any déjà vu…. 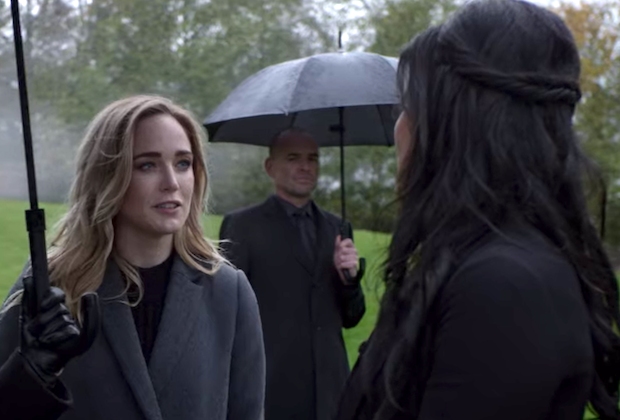 TVLINE | [Arrowverse EP] Marc Guggenheim told me that it was a bit of a close call there with the series finale — that they were already starting to film Oliver’s funeral and you were still at the airport, coming into Vancouver [from Hawaii].
Oh my gosh. Well, I was personally stressing out because I was desperate to be a part of Arrow‘s final season, and I know Guggenheim and everybody was trying so hard to work with me and the schedule of Five-0 and Vancouver…. There were a couple of [previous] times that we thought that I could get over there, but then schedules changed and we had to bail out. But at the last minute, Five-0 basically rearranged our schedule so that they could accommodate Arrow’s schedule, and Arrow did the same thing, where they were writing scenes in for me but then taking them out and doing other stuff.

I’m so thankful that I got to fly in there and do the funeral scene, and to be reunited with all those characters and that entire crew and that world…. That was another one of those sad days, where we’re doing a funeral for Arrow, and those were all real tears everybody was shedding.

TVLINE | When Nyssa introduces Sara as “my beloved,” do you think that’s almost a formal title at this point, or is there still a torch being carried? [Guggenheim tells TVLine the chosen term of endearment/callback was Law’s suggestion, as they grappled with how Nyssa would introduce Sara.)
I think Nyssa’s always going to have a torch for Sara. Sara is her beloved. She is the love of her life. She is her soulmate. That being said, soulmates take on different forms, and it doesn’t necessarily mean that you’re going to be together. I think Nyssa has moved on in her own way and knows that Sara’s living her life. She respects Sara in what’s she’s doing, but at the same time, she’s always going to be the No. 1 love of her life. She will always carry that for Sara.

TVLINE |  I was watching their reunion very closely. Was there any debate about how warm it should be, knowing that Sara is in a serious relationship? Was any flirtation dialed back? Or was it simply what we saw?
There was a lot of discussion. You know, the script changed a little bit — again, because scenes are written in and then taken out, and then we didn’t know what we would be able to film or not…. So, yeah, there was discussion of paying respect to “Avalance” and still holding up the same for “Nyssara.” It was a delicate balance of how do we go forward with this and describe exactly what our relationship is now? 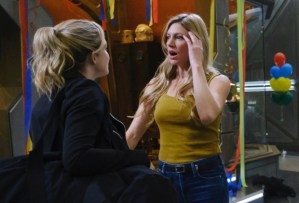 TVLINE | Are you interested in some day popping up on Legends of Tomorrow, to actually explore the Nyssa/Ava dynamic?
Fingers crossed! Because I would love to mess with Ava a little bit….

TVLINE | Nyssa would probably just want to evaluate if she’s worthy.
Yeah. Yeah. I totally need to see if Ava’s worthy of Sara!