Love Is Blind‘s grand experiment is over… but did it result in any lasting relationships?

The Season 1 cast of Netflix’s buzzy dating show — which saw couples meet and get engaged without ever seeing each other in person — got back together for a reunion special on Thursday and gave us a much-needed update on their relationship status. Which couples are still happily married? Which one got back together after splitting up at the altar? And who’s still a little bitter about how things went down in the pods? Let’s check in on each pairing:

AMBER AND BARNETT | Amber may be newly blonde now, but these two wild cards are still married. (“I haven’t killed him yet!” she says with a giggle.) They did have to move, she notes, because their house “was haunted, y’all.” Barnett reports that their first year of marriage — remember, Season 1 was filmed back in 2018 — has been “a wild ride,” and Amber reveals that they nearly split up at one point. She even looked into hiring a divorce lawyer. (“I’m a stubborn a—hole,” Barnett admits.)

They may be happy now… but Amber’s still not happy with Jessica. While Barnett now sees that he “may not have used the best words” when he said he’d marry Jessica in the pods, his wife viciously lashes out at Jessica for “throwing herself at him in Mexico… bitch, you’re shysty. You’re so fake.” Jessica does apologize and insists she has “super respect” for their relationship — but Amber still isn’t ready to fully accept it. 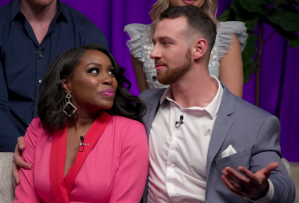 LAUREN AND CAMERON | Love Is Blind‘s golden couple is still married, still happy, still adorable. Despite all the manufactured drama about their interracial relationship, they say their families are getting along great together. They even got a puppy! (Sorry, a “fur baby.”) Cameron says he never wanted to date a woman that had a dog, so when he told his mom they were getting a dog, she knew it must be true love. (Aw!) They are thinking about having a human, non-fur baby “one day,” too.

GIANNINA AND DAMIAN | Even though he dumped her at the altar in dramatic fashion, these two are back together and dating, though they’re still living separately. Damian doesn’t regret saying no at the wedding, but he does apologize for the pain he put Giannina and her family through. She “respects” the decision he made — and even ends up apologizing to him, for some reason? (Cameron had better watch his back, though: Damian did reveal that he and Lauren had a special bond in the pods, doing goofy Star Wars voices for each other.) 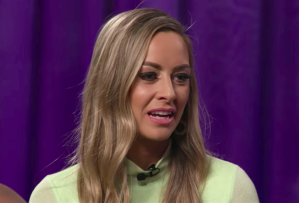 JESSICA AND MARK | She doesn’t even want to watch clips of their ill-fated wedding day, and she blames a lot of the terrible things she said to him on alcohol. She just thinks they needed more time to get to know each other. Mark still thinks she’s a “phenomenal” woman… but he does wish she would’ve told him she still had feelings for Barnett. They’re both still single, for the record. (And she never made him that Italian beef! C’mon!)

KELLY AND KENNY | Kelly is single and says she’s gone through a few “career transitions” since the show; she actually dated a guy for a while who attended her wedding to Kenny! She’s still broken up about the whole thing, though, and cries as she assures Kenny he’s a great guy — but she also wanted a more traditional wedding with a bridal shower. (Oh, so that was the problem.) She wanted to continue dating Kenny… but now he’s happily dating someone new. Yeah, Kenny!

CARLTON AND DIAMOND | These two didn’t even make it to the altar, after an explosive breakup in Mexico, and they’re both still single, but they did reconnect as friends. Carlton doesn’t regret coming out as bisexual, and still thinks the day he popped the question to Diamond was “the best day of my life.” He even gets down on one knee at the reunion and… apologizes to her, giving her the engagement ring back. It’s definitely a weird moment — but hey, this is a weird show!

Drop your thoughts on the Love Is Blind reunion — and whether you’d watch a Season 2 — in the comments below.