I hope you’re all wearing your banana best, because this week’s Masked Singer takes us all to banana church.

In what was probably his best performance to date, the tall, yellow and fruity competitor sang “Lean on Me.” It was in tune. He remembered all the words. It even evoked genuine emotion beyond “yee-haw!” Frankly, I didn’t know Banana had it in him.

And that burst of tropical fruit virtuosity kept him in the running for another week. However, his edible competitor Taco had less luck. Read on for the highlights of the performances. 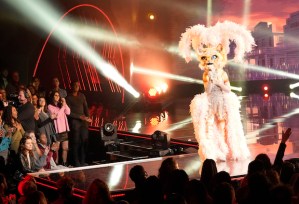 KITTY | This week’s schtick involved having the contestants’ friends — also in costume — give testimonials in their clue packages. Kitty’s pal appeared in a green Rapunzel wig that covers her face and… are those… fuzzy oven mitts? The friend told us Kitty “didn’t have a ton of friends and got bullied at school for being weird.” Meanwhile; meanwhile, clues including a Faberge egg and a candelabra flitted across the screen. With that odd interlude aside, Kitty did a bang-up job of singing Miranda Lambert’s “Mama’s Broken Heart” — if this thing were really about the musical chops, she’d win, hands-down. (My guess: Victorious‘ Victoria Justice.)

TACO | The handheld snack performs “Can’t Help Myself” by The Four Tops, which had a very different feel from his previous two outings but still showed off his easy vocal style. His friend told us, “We both help people when they get knocked out, when life hits them in low places.” And later, in yet another gimmick for the evening, Taco gave judge Nicole Scherzinger a friendship bracelet that says “kiss.” He added: “When I saw you in person, you were perfect.” (My guess: Dancing With the Stars/America’s Funniest Home Videos host Tom Bergeron.)

BANANA | As I mentioned earlier, Banana’s number this week — “Lean on Me” by Bill Withers — was a zillion times better than the mess he turned in last episode. Afterward, he told the crowd that his father passed away recently, “and this song was our jam.” Banana’s “friends” seem very much like his daughters (and why aren’t they in costume? Those on-screen graphics they hid behind were cheesy, which on this show is really saying something). Jeong calls the entire endeavor Banana’s best performance so far, and he’s right. (My guess: Comedian Bill Engvall.) 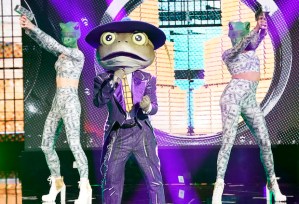 FROG | Frog’s take on The Gap Band’s “You Dropped a Bomb on Me” was energetic and fun. His friend, who seemed like a former teacher of his, dropped clues about shampoo and living in Los Angeles. And his bracelet to guest judge/Season 1 winner T-Pain simply said: “All we do is win.” (My guess: Shad “Bow Wow” Moss… who happened to record a single, “Outta My System,” with T-Pain… and that single went platinum, which you could definitely call “winning.”)

THE UNMASKING | Taco was reveled to be Bergeron. (Get his thoughts on the novelty of feeling nervous here.)

Now it’s your turn. What did you think of the episode? Who do you think is under the remaining masks? Are you looking forward to meeting the next batch of singers? Sound off in the comments!