CBS’ SEAL Team resumed Season 3 with a breathless two-parter that first ripped the rug out from under us by putting Havoc itself in the line of fire, and then left viewers with an explosive cliffhanger, when a purely voluntary side op went sideways.

Jessica Paré — after briefly reflecting on the eight-year anniversary of her Mad Men performance of “Zou Bisou Bisou” (post mortemed here) — previewed for TVLine the blame game coming this Wednesday at 9/8c, as a result of that failed mission.

TVLINE | First, talk about that scene last week between you and David [Boreanaz], as Mandy and Jason explored their respective feelings about collateral damage. What was that like for you?
What’s funny is that you just brought up “Zou Bisou Bisou,” which was definitely not something I was comfortable with. The two-parter had a lot of action at Havoc that Judd [Lormand] and Toni [Trucks] and I did, which was also not in my wheelhouse. Conversations about feelings, however, are definitely in my comfort zone. [Laughs] Especially in this context, of course, because these are two people who don’t discuss feelings very often. Even with the language between Mandy and Jason, we rarely say exactly what we feel, and in this conversation, the subtext speaks louder than the words. She is asking him to go get this guy, and he understands why. He understands exactly how she feels.

She’s the one person for Jason in his life — and I’m assuming it’s the same for her — that doesn’t want him to be different, who accepts him readily as himself, as who he is, and who can understand him. There’s this tacit understanding of each other, as a real support system. 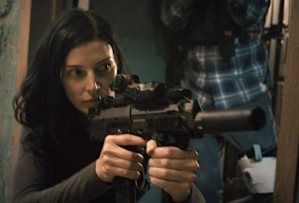 TVLINE | Regarding the gunplay you were not comfortable with, how did you get quickly acclimated? Because you had to sell it.
I’ll tell you, this is one of those times when you trust the process. [Laughs] We give our editors a mountain and they make a molehill. They are really, really good at making us look good at that kind of stuff. I had a lot of help from the tech advisors — Kenny Sheard, Chase Rivera and Garrett Golden — and of course Mike Massa, our stunt coordinator. The way we shoot our shows is quite “quickly,” in keeping with the ethos and energy of the show.

Running around the corner with a weapon you don’t know how to use can be sort of tense. There was one shot where I reload and I kept having the mag facing the wrong way. [Laughs] And when I finally got it right, they were like, “Just don’t hit yourself in the face” — and of course on the next take I hit myself in the face. I’m very clumsy about the whole thing. And then when I realized I’d actually be shooting at people, at the stunt guys…? I apologized to them in advance. 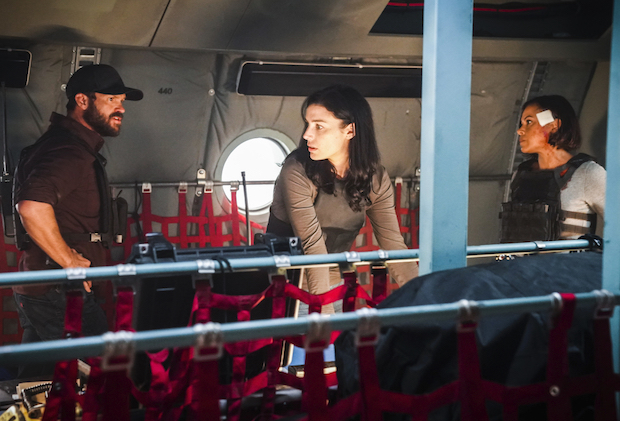 TVLINE | This week we hear those three little words from Jason — “total mission failure.” It sounds like at least one head will roll, as a result of the Venezuela explosion.
Well, somebody did something wrong, and that is the thrust of the episode. We go back and piece it together. We didn’t have overwatch, so nobody saw the whole picture.

TVLINE | So is it not a question of who in the command chain made the wrong call? Mandy asked for this op, Jason greenlit it, Blackburn let it happen….
Well, there is a bit of that, of course. Mandy did push pretty hard, and Jason did make a call that might not be based on sound intel as much as feelings. But the stakes of the show in general are you have to make these pretty heavy, life-or-death calls, so when something goes wrong, whose fault is it?

TVLINE | What blows you away when you see SEAL Team cut together, all produced and on TV?
The thing that I’m most proud of when I watch the show is the attention to technical detail. We want to tell stories, of course, but we try hard to respect the technical aspects of what this team would be doing. So I’m always struck by the beauty of not just the camerawork, but there is a real choreography to a lot of the technical protocols, the way the guys move…. I always find myself thinking, “This is more beautiful than I would guess a show about war would be.”

Also, I like how hard our crew works, how quickly we move, how huge everything is. It’s a big action/stunt show, and the people who work behind the scenes are the real deal, and to see the amount of work that goes into every one of those shots and how quickly it comes together…. Our DP, Jimmy Muro, is very into all of this movement, where the camera is never still. Sometimes we’ll finish a scene and I’m like, “Oh, was I in it?” The cameras are always moving, so you have to always be giving your all. You don’t know when you’re on camera.

TVLINE | I’m trying to remember what all we know about Mandy on the personal front. I feel like at the bar one time she may have alluded to how dating sucks…?
This is what I love about this part, and why I’ve never pushed for any [personal details]: I think it’s super-rare to have a female character who we know only through her work. Generally with a female character, we feel like we have to tell her story — “Who’s she’s dating? Does she have a cat? What’s in her refrigerator?” At first I was frustrated because I didn’t know what her backstory was and what her life was like, but I think that’s an interesting thing about her. She has made a couple references to dates or guys she was dating, but we don’t know much about her.

TVLINE | So whereas David Boreanaz once argued, like, “How do you know that we haven’t quietly hooked up already,” you just don’t care.
It’s never been on the page, so it’s not something I’m playing. I can’t play something I don’t know happened or not. I think David and I as actors really enjoy working together — we have a lot of fun in our “Jandy” scenes, as someone calls them.

TVLINE | Do you watch the show as a fan? Do you have an opinion on who Clay should be with? Alana Tol’s character or Adelaide Kane’s?
I think it’s hard for viewers, for the audience, to give up the person that they first liked. You get attached to somebody and you can’t really “see” this new person yet. Also, I haven’t worked with Adelaide Kane yet, so….

TVLINE | Rebecca has the D.C. connections, though. She could put Clay on the political track or something. Clay for President in 2028!
Oh, god, wouldn’t that be dreamy? “Make Presidents Hot Again!”