“It’s going to be an intense journey,” SEAL Team‘s David Boreanaz says of the loss suffered by Jason Hayes in this Wednesday’s episode of the CBS military drama.

As telegraphed last week at the close of the season’s second episode, Jason’s wife Alana (recurring player Michaela McManus) was in a fatal car accident, while running a quick errand upon his return home from a mission. The rest of the hour encompassed the reactions of Jason, his kids Emma and Michael, and well as his SEAL brothers — capped by a warm moment between Jason and CIA liaison Mandy.

“It was so hard to go down a path this emotional,” Boreanaz says, “but look, at the end of [Episode] 2 I think the floodgates opened. Things are going to shift radically, and I’m really proud of the work from everybody and where we’re at right now. It’s going to be an emotional ride, and some really great work, the next few episodes.”

When Bravo Team was ordered to spin up for a new mission, Jason knew that he had to stand down, being the only parent his kids have left. But for how long can he sit on the sidelines? Boreanaz spoke with TVLine about Jason’s status with the team, and much more.

TVLINE | When did you first get wind that this was coming? Because when I saw Michaela at the NBC Upfront in May, she knew she was going to be back for a bit.
Well, it was something that was suggested to me, and I said to [showrunner] John [Glenn] that it’s a very delicate situation and you have to take into consideration where Michaela was, going on to a new show…. And you know, she’s so awesome. [Pauses] I mean, I talk about it now and I get choked up because she’s such a sweetheart, and a part of the show was her being able to allow the character to explore these areas. It’s a huge sacrifice to say, “Yeah, OK, I’ll die. I’ll get into an accident.” When we pitched the whole season to the network, at first the network was hesitant. They thought, “Oh, maybe she should travel to the West Coast with the kids, they could be divorced,” and I said, “Well, you’re losing a really strong impactful moment that could shift and change the emotionality we’ve got.” (TVLine reached out to McManus, who stars on the midseason drama The Village, for comment on her exit, which is printed at right.) 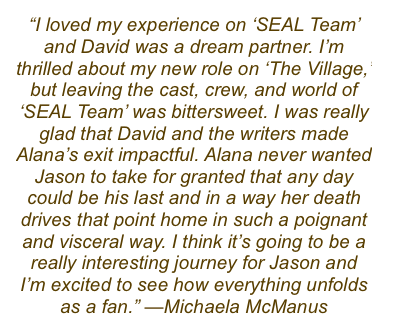 I told them, and I could be wrong, that I’ve never seen this on a show, where a guy who’s in the military — who’s a Tier 1 operator who is so addicted to his job and this adrenaline rush of what he does that when he comes home not only is he affected by the people who can’t understand these guys and their issues, their PTSD and struggling with traumatic brain injury — becomes a single dad. I love the idea, because I thought that the conflict and the stakes would just raise it up high.

TVLINE | In this season’s earlier episodes, was it hard for you and Michaela to not telegraph to the audience, “These are going to be our very final scenes”? Like, “Let’s not have a longing look when I say that I’m going to get you a rotisserie chicken”?
That scene’s tricky, because you have to understand from my perspective and from what my character is going through, that when she says, “Don’t you see how happy you are when you’re home?,” he doesn’t. He kind of gets it and he doesn’t, and that’s one of the things with these guys — what they do is life or death, and they love it. They hit their target and come home. The battle is tenfold for them. And to play that, what I was thinking of going through at that moment was dealing with what a guy like that would deal with, and her dealing with what she would have to deal with as a wife, separated and having two kids. I thought it was played great, and the fact that it was just like, “Hey, I’m going to go out and get us some chicken, beer,” whatever, that’s it.

TVLINE | For this episode, what scene was most important for you to pull off?
There are so many. There’s a journey to this, from the end of Episode 2, which for my character was the realization of what just happened and I’m turned around, and the journey into the hospital, putting the pieces back together, going through that anger phase, that depression, that sadness…. It’s definitely the five stages of death. And then you need to be able to add layers so you’re specifically dialed in and not just one-note. As an actor, it’s very challenging, and I work with Ivana Chubbuck who has been my girl, man, for 20 years. We get each other. For this journey, if you’re not going to be able to open the doors that you’re afraid of, I use that fear as motivation. Otherwise, what’s the purpose?

TVLINE | When Jason was holding it together for the first couple acts, I was like, “I get it. He’s strong.” But as a viewer, as someone invested in his family, I needed this guy to lose it. So when the kitchen scene came along, I was like, “OK, now I’m dialed in.”
Yeah. Yeah. There are so many different levels to it. It starts at the end of [Episode] 2 and then it goes to 3, then it goes to 4, 5, and 6…. It’s not just a one-scene moment and then everything’s done. This is a hard journey and something that I’m so excited that I took on. I just said, “You know what, it’s time to just buckle in and get focused on this,” so I’m happy that people allow me to do that. 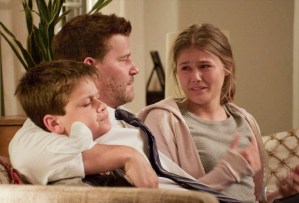 TVLINE | Can we just talk for a second about Kerri Medders, who plays your daughter, Emma? Because wow.
She’s awesome.

TVLINE | Playing a mourning child is ostensibly easy — you do the things you’re supposed to do. But it can be a mess if you don’t have the right child actor in there. And now I’m getting choked up.
She’s the crux. I talked about it to A.J. [Buckley] yesterday. He said, “Man, I did some ADR, and the scene between you and your daughter….” Again, that’s the stuff that’s going to wreck you, man, if you’re a parent or not. But Kerri, she gauged off of what we were giving her. She’s really good at listening. She’s super present, which makes it very vulnerable. In the kitchen scene, I scared the s–t out of her. [Laughs] It was pretty heavy. The woman who played my mother (Homefront‘s Wendy Phillips), she looked at me like, “OK, I need to go take a step outside.” So there were some really tense moments of vulnerability on that set and it affected you know everybody at the crew for six episodes. But yeah, Kerri is phenomenal, she’s phenomenal.

TVLINE | In the immediate wake of this, I’m wondering: How does Jason ever get back to doing his job? I totally support his decision to stand down on this next mission, but that’s not the show. What is it going to take for him to get back to the team? Like, does Naima step up and say, “I can handle such-and-such,” or…?
I will say that it is someone from the homeland that gives him the OK, and the moment is so intense and just heartbreaking. There are more people to be lost, I’ll tell you that, in the next four or five episodes. But there is a message that he gets that will allow him to [rejoin the team].

TVLINE | Lastly, what do you want to say about that scene toward the end, with Jason and Mandy in his car? What all was that about?
It was a great scene. Obviously it was cut down a bit; the director’s cut you would love. In finding the car, I said, “You know, we’ve got to have a car that is reminiscent of maybe something that Jason and Alana used to have and drive before he got into BUD/S.” Something that he was building for her and rebuilding, and I was like it will be great if we just do it in the car. [Director] Chris [Chulack] loved the idea, and you know now you have Alana gone and now Manny steps into that car. If you want to say it’s foreshadowing or not, I don’t want to jump that shark because I think the beautiful thing about the relationship between Jason and Mandy is this: Everyone will be like, “Oh, it’s so predictable that they’re going to hook up.” Well, how do you know that we haven’t already? I’ll just say that. I’m not saying they slept with each other — I don’t know what it is, but I think it’s a little bit more interesting. And again, the layers of a relationship in this environment, in this work environment, with what these guys do is going to be intense and fun.

TVLINE | Well, what I like about the cut of the scene we did get was it told me that she’s someone to whom he can say, “Don’t say this, don’t say that, I’ve heard it all week. Let’s talk about anything else.” And then she sits in the car, holding his hand and then there’s just like silence — and maybe the silence continues. Or maybe she starts talking about an op or something. But she gets it.
Yeah. She does, and that’s where I see the path. The two of them have high respect for each other and in the world that they live in, in the work environment they live in, especially with these Tier 1 operators…. They’re not 100 percent, they’re 150 or 180, high adrenaline, and they do things way intense.