The family reunion that takes place on this week’s A Million Little Things will be less “barbecues and matching T-shirts” and more “guarded smiles and tentative hopes for the best,” cast member David Giuntoli previews.

Because when Eddie’s sister Lindsay shows up in Thursday’s episode (ABC, 10/9c) after a years-long absence, she very well might threaten his hard-won sobriety — and therefore the stability of his family.

“Eddie loves his sister. [They] share a similar history. [They] would get loaded together and were always very tight and wonderful friends,” Giuntoli explains. “However, Eddie had to cut her out of his life when she would not clean up. She was a mess… When Eddie got sober, I mean, she’s such a terrible influence on him. So when she shows up, it’s kind of like letting a loaded gun in the house.” 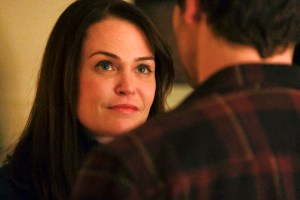 Sprague Grayden (The Following) plays Lindsay, whose arrival in Boston in Thursday’s hour “causes tension with the family,” per the episode’s official synopsis. And that’s no surprise to viewers who saw how Katherine reacted when she learned her sister-in-law had been in contact with Eddie earlier this season.

Giuntoli says he easily can understand Katherine’s apprehension: “It can go wrong for Eddie pretty quickly. It’s just dangerous — and he knows all of [Lindsay’s] lies, he knows all of her habits, because he did those. He’s lived those.”

It helps that Lindsay says she’s sober — “but Eddie wants to make sure that this is actually happening this time for real,” he adds. (Apparently, this isn’t Lindsay’s first attempt at sobriety.) “Eddie doesn’t want her anywhere near his family until he’s certain that she’s OK.” At the same time, “Eddie also has this understanding now, as a sober person, that he needs to be supportive of his sister. So, he doesn’t want to leave her flailing in the wind when she is making earnest attempts to get back into our lives.”