For those of you who have read The Fiery Cross, Sunday’s hour covers the Frasers’ interlude at the Beardsley homestead. And if you haven’t read Diana Gabldon’s novel, which provides the basis for this season of the TV series, just know that maggots, spousal abuse and gushing amniotic fluid are in your very near future. Enjoy!

Read on for the highlights of “Free Will.”

ROAD TRIP! | Jamie returns from his not-so-fun time in town to find Claire asleep in their bed. He crosses himself and quietly says, “Deo gratias;” just then, she wakes. “What are you thanking the Lord for?” she asks after kissing him hello. “For the sight of you, Sassenach,” he purrs back at her. Know what I’m thanking the Lord for? The fact that that candle Claire left burning in their wooden house of lots of wood didn’t fall over and turn the whole thing into a roman candle. Does no one remember the death notice Roger found?!

She gets up so they can process his trip. “You can’t feel responsible for the choices others make,” she says, calming his fears about Murtagh’s future by pointing out that at the moment, both Jamie and his godfather are safe and home. Jamie’s like, “Yeah, about that — I’ve gotta summon a buttload of men and return to Hillsborough, like, yesterday.” He’s still hoping it won’t come to fighting, but Knox did send word to Governor Tryon to rally reinforcements. “A show of force to prevent war,” Claire murmurs, but she tries once more to calm him by pointing out that the Regulators’ rebellion is barely a footnote in American history, so it can’t have amounted to much.

Oh, and she’s totally coming with him when he marches back to Hillsborough, a decision Jamie doesn’t even try to fight. She points out that a doctor is always good to have on hand when fighting is likely. “You need my help,” she says. “I always have, and I always will,” he agrees, and truer words never have been uttered, so they drink to it. 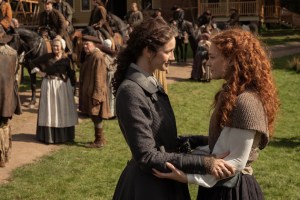 SEEING DOUBLE | Fergus takes Jamie’s call for recruits to a nearby printer; he writes the announcement on the back of one of Claire’s medical handouts. Then everyone gets ready to go. “I LOVE THESE LOOSE HAIRDOS” I write in my notes, which is not super important but deserves to be said. Jamie leaves Bree in charge of the ridge, Fergus hands Jamie a letter, they all say their goodbyes, and they’re off!

When the magical militia tour stops to make camp, Jamie takes his wife aside: The letter confirmed that Stephen Bonnet has been seen in Wilmington. Oh, and you guys just left Brianna alone in the middle of the wilderness? Cool, cool. That drama eventually gets pushed aside for a more immediate one: We meet Josiah’s twin brother, Kezziah, when he steals some food from camp and gets caught. Josiah quickly explains that he and his brother are indentured to a man who lives nearby; Josiah ran away a year ago and broke his brother out the night before. Kezzie has been deaf since he was 5, thanks to their cruel master’s repeated boxing of his ears.

Claire examines Kezzie and discovers his eardrums have been ruptured. That, coupled with the knowledge that the boys were sold into a 30-year (!) servitude at 2 years old by a ship’s captain after their entire family died on the voyage to the colonies, seals it: Jamie will go to their owner, Mr. Beardsley, and purchase the rest of their servitude. Claire will go with him, and Roger will continue on to Brownsville to keep the recruiting train moving.

THE MAN UPSTAIRS | No one answers when Jamie hails the Beardsley home, and there’s a goat walking around inside the house. Sadly, this is the least disturbing thing about the place. A woman suddenly opens the door and tells the Frasers to go away; at Jamie’s inquiry, she says her husband is dead. She’s more than happy to give him Josiah and Kezzie, and Claire is already so squicked out about the strange woman and the house’s icky vibe that she’s like, “Great! Let’s go!” But Jamie points out that they need the boys’ papers in order to fully liberate them, so Claire stuffs down her bad feelings and goes inside with him.

Bad call. BAD CALL. The house smells terrible. There are scratch marks on the wall, marking the passage of time… but for what? And eventually Claire’s Sassenach-sense makes her realize something terrible: “That smell,” she whispers to Jamie, “it isn’t goat.” AND THAT IS WHEN THEY NOTICE SOMETHING DRIPPING FROM THE CEILING EWW EWW DRY HEAVE EWW.

Against Mrs. Beardsley’s wishes, Claire grabs a candle and goes upstairs to the home’s second level. That’s where she finds flies buzzing around what looks like the corpse of a man… only he moves when Claire touches him, scaring the bejesus out of all of us. Claire cries for Jamie and he comes running, She somehow ignores the bugs crawling on the man’s body long enough to guess that he suffered a stroke, “an apoplexy, you’d call it,” and that he’s been lying in his own filth for weeks. It looks like he’s been tortured, too: Mrs. Beardsley’s been feeding him just enough to keep him alive and in agony.

THE HITS KEEP COMIN’ | Claire wheels on the woman, demanding answers. “He chased me, struck me,” Mrs. Beardsley says, explaining that her now-incapacitated husband was in the process of trying to beat the snot out of her when he suddenly fell and lay writhing on the floor. She couldn’t move him, so she left him there to fester. And fester he did, judging by the number of maggots Claire picks out of his bedsores. Mr. Beardsley is still mentally with it, though, so he can communicate by blinking. He blinks once to confirm that he’s been at his wife’s (lack of) mercy. “What you must’ve done to deserve this,” Claire mutters.

Claire and Jamie’s discussion of amputating the man’s gangrenous foot is interrupted by gagging sounds: Mrs. Beardsley has taken advantage of their distraction and is trying to choke her husband. She and Jamie tussle as he pries her off the living corpse, then there’s a dripping sound. “The babe,” Mrs. Beardsley says, prompting Jamie and Claire to exchange the WTFiest of WTF? looks

Yep, she’s pregnant and going into labor — though given her size and shape, it was hard to tell she was with child. Claire delivers the baby and afterbirth, with the grossest of sound effects, and announces it’s a girl. When Jamie takes the girl over to the window to get a good look at her, he realizes something else: She’s part black. Mrs. Beardsley confirms that the child isn’t her husband’s — rejoices in it, really — and later tells Claire that Mr. Beardsley has gone through five wives, all of whom have died. She’s convinced that he killed them all. “He would’ve killed me, too. None of us could give him a baby,” she reflects. And how does she know? Oh, she sees the ghosts of her predecessors sometimes. NBD.

We learn that the woman’s name is Fanny, and she has zero interest in her daughter or the house, which is the kid’s birthright. After a brief conversation about bringing a kid into the world, which turns into a conversation about whether or not Bree and Roger should stay in the past, Claire and Jamie decide to get some sleep by (eww) sleeping on the floor (ick) on some furs (gross). When they wake in the morning, the baby is there but Fanny is gone.

Mrs. Beardsley left her daughter on top of the boys’ papers and the deed to the house, indicating that she’s not coming back. So the Frasers cap off their horrifying side trip by packing up the goats and engaging in a little mercy killing. “I would do it for a dog, Claire,” Jamie says, sending her and the baby outside while he attends to Mr. Beardsley. “Would I do less for him?”

WHAT MUST BE DONE | Inside, Jamie explains everything to the stroke victim, asking him to blink to confirm whether or not he wants Jamie to end his life. Mr. Beardsley blinks — but doesn’t want forgiveness for what he’s done. “Then may God forgive us both,” Big Red says. He pulls out his gun, steels himself, then shoots.

Outside, biblical number of birds fly over the house. Jamie comes out, lost in thought. He eventually says he thought that apoplexy killed outright; now he’s wondering if his father, who also had a stroke, suffered at all. Jamie makes Claire swear that she’ll put an end to his life if the same fate befalls him. “I’ll do what must be done,” she vows. (Side note: As I recall, Jamie is more visibly upset at this point in the book — isn’t he sick outside after, and then visibly upset after that? Not that I’m asking for more disgusting bodily processes in this show, but I sometimes think the scripts err on the side of making Jamie more stoic than emotional, and one of the things I love about the character in the books is that sometimes he totally loses his stuff.)

Anyhoo, now it’s your turn. What did you think of the episode? Sound off in the comments!