Need to catch up? Read our latest Homeland recap here.

The Afghan peace process got rocked by tragedy this week on Homeland — and things are about to get much less peaceful.

Carrie gets hauled away by military police and driven to the airport, but she’s not being shipped out of Kabul. Saul is there to greet her, and tells her President Warner is on his way to announce the peace treaty deal. Warner arrives and sincerely thanks Carrie for the sacrifices she made in that Russian prison, and Carrie is clearly touched. Not everyone is celebrating, though: Tasneem and G’ulom find each other at the announcement ceremony and gripe about how they were both shut out of the peace process. Tasneem tries to leave, but Saul forcefully informs her she’s staying — and he knows she was behind the attempt on Haqqani’s life, too.

Warner heads out to visit a military base and tell the troops they’re going home, and Carrie and Jenna are put in an SUV as part of a decoy motorcade. On the way, though, Carrie gets a frantic call from Samira: Her late husband’s brother stopped by and asked her to come back home and marry him. When she said no, he returned with a few Taliban buddies, intending to force the issue. Samira begs Carrie for help, so Carrie orders her driver to pull away from the motorcade and drive directly to Samira’s place. 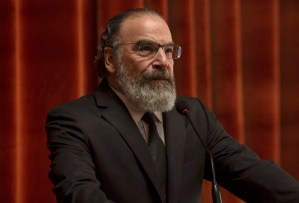 Saul addresses the crowd at the ceremony as Warner arrives at Max’s military base along with the Afghan president and gives a big speech — while Carrie pulls a gun on Samira’s captors and whisks her away to safety. (Plus, VP Hayes watches Warner’s speech from the White House and complains that Warner is just grandstanding to lock down a second term.) The troops cheer Warner’s speech, and Max prepares to go back home, but decides to stay when the troops worry they’re losing their good-luck charm. Pretty soon, though, it seems like Warner could use a good-luck charm of his own.

An official pulls Saul aside and, on their way back to the CIA station, informs him that the President’s helicopter has (gulp) disappeared off the radar. Carrie gets a message to return to the base ASAP, too, and gets briefed by Saul: They don’t know if the copter crashed, but they have a surveillance helicopter out looking for it. They’re watching on a big screen as the searchers locate the wreckage of the President’s helicopter… just as Taliban fighters stream in on foot. One of them pulls out a rocket launcher, and as the surveillance copter opens fire on them, a rocket hits the copter, the screen goes black — and Carrie’s famous chin starts quivering.