Haqqani smells a rat in his inner circle this week on Homeland — and the smell is coming from his own family tree.

A kidnapped Saul frantically tells Haqqani that he’s not responsible for the ambush; the ISI did it, he says. Haqqani must have a traitor in his midst, he theorizes, which Haqqani scoffs at — but he quickly interrogates one of his henchmen, who tells him the only people who knew about his meeting with Saul were the people he told himself. Hmmm… that includes Haqqani’s own son Jalal, who is meeting with Tasneem when he’s interrupted by a phone call from his dad. He seems surprised (and not all that thrilled) that Haqqani isn’t dead, and we learn he and Tasneem were the ones behind the ambush. Tasneem cautions him to play it cool, though. 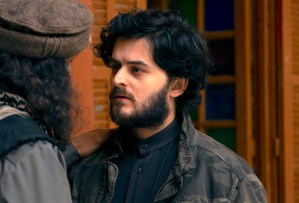 Jalal returns home and is greeted warmly by his father, who informs him they’ve been betrayed. Jalal blames the Americans, calling Saul “a professional liar,” but Haqqani points the finger at him instead. Jalal denies it, but he noticeably slips when he refers to “the traitor you’re looking for” (not “we’re“). Haqqani notices — and his fears are confirmed when he listens in on Jalal calling Tasneem in a panic. He sets Saul free and tells him Jalal (his only living son, by the way) tried to have him killed. He’s contemplating stepping down, but Saul urges him to stay on, saying he’s the only one who has the power to end this war.

Haqqani’s men yank Jalal out of bed and tie him to a post by his neck, where Haqqani demands to know the truth, firing a bullet right past Jalal’s head. Jalal turns on him, calling him “a tired old man who’s lost his way” and blaming him for negotiating with “the enemy.” Haqqani softly tells him the war can’t be won and frees his son, asking him to join him. Jalal promises to “try” — but when he insists it was the ISI and not him behind the ambush, Haqqani slaps him away and casts him out in the streets alone.

Saul and Haqqani roll up their sleeves and get serious about a peace deal: Haqqani is hesitant to agree to disarmament, but Saul offers him amnesty and a legitimate seat at the political table for the Taliban. Haqqani agrees to a cease fire, but he expects Saul to hold up his end of the bargain. He also worries that he made a mistake in casting out Jalal — which we can pretty much confirm, since he’s walking the streets alone when Tasneem arrives in a truck to pick him up. 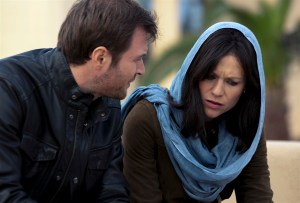 REUNITED (AND IT FEELS NO GOOD) | Meanwhile, Carrie reconnects with Yevgeny after getting a message from him indicating a place and time for them to meet. Dunne decides to allow the meeting so he can spy on Carrie, but Yevgeny outsmarts him by planning the meeting during morning prayers so the prayers drown out their conversation. Yevgeny apologizes to Carrie for leaving her alone in that Moscow asylum, but claims innocence when she blames him for Roshan’s murder. He just wants to “pick up where we left off”: He reminds her that he saved her from killing herself, and how they used to take long walks where she told him everything about Brody and Franny… and even about almost drowning Franny. (Yikes. Forgot about that one.)

Back at headquarters, Carrie is preparing to write up a report about her talk with Yevgeny, but Dunne wants to know why she disappeared for 90 minutes afterwards. (She claims she just needed to clear her head. Hmmm.) He asks her what Yevgeny told her, and she blatantly lies that he’s “feeling underappreciated” by Russian intelligence and might be open to recruitment. Well well, Miss Mathison, what do you have up your sleeve?

* President Warner made his Season 8 debut, and we met True Blood alum Sam Trammell as VP Ben Hayes, who loudly called for Saul to be fired during a briefing. (While Saul was still a Taliban prisoner, mind you.) Later, David Wellington cautioned Warner that Hayes was meeting with big donors and may be lining up a primary challenge to him. Boy, the Oval Office is a real turnstile on this show, huh?

* Speaking of President Warner, looks like he’ll be heading to Afghanistan soon to seal the deal on this peace agreement, at Carrie’s suggestion. It’s what President Keane would’ve done, she said. (And where is Keane, anyway? I know she resigned, but she was a big part of the past two seasons.)

* Max is sick and tired of being his platoon’s good luck charm — they even jumped on him and forcefully rubbed his belly like he’s a Buddha statue — but just as he was about to leave, bad weather forced him to stay with the platoon for a few more days. Bad luck for him, good luck for the troops!

* Jenna tried to earn Carrie’s confidence by smoking a cigarette with her, but Carrie could sniff out her ulterior motive from a mile away. Still not convinced Jenna is not a mole of some kind.

* Why did Carrie wear a brunette wig to meet Yevgeny? She wasn’t disguising herself for him, or for her CIA pals, who she didn’t even know were watching. Was it in case Russian intelligence was listening in?