Is wedded bliss in store for Legends of Tomorrow lovebirds Ray and Nora, ahead of their departures from the Arrowverse spinoff?

In TVLine’s exclusive photos from the March 10 episode (The CW, 9/8c), the couple definitely appears to be getting hitched, with baddie Damian Darhk (Neal McDonough) even in attendance to walk his daughter down the aisle. Ray, meanwhile, looks to be clinging to his best buddy Nate as he makes the trip to the altar. (Maybe he’s nervous that his father-in-law is going to be Damian Darhk?)

Of course, the wedding doesn’t come as a complete shock, seeing as how Ray revealed in this past Tuesday’s episode that he wants to ask Nora to marry him. The nuptials also come as the CW drama is readying to bid adieu to Ray and Nora: Last August, it was announced that Brandon Routh, who has been with the show since its premiere in 2016, and Courtney Ford would both be stepping down as series regulars during Season 5 — and they’ll be doing so in grand fashion, if the first-look photos are anything to judge by. 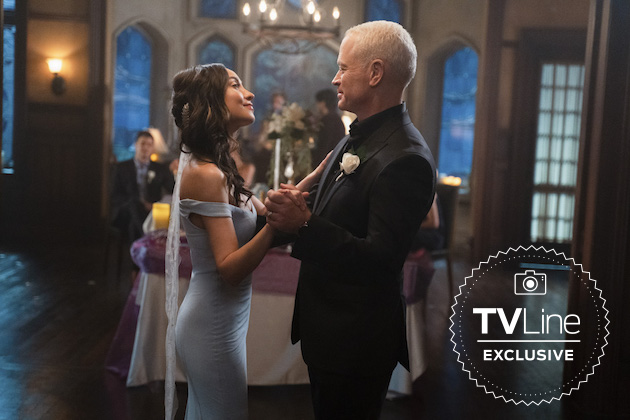 Elsewhere in the installment, titled “Mr. Parker’s Cul-De-Sac,” “Ava learns what Sara was really doing while she was away and confronts her,” per the official description. “Charlie and Constantine make a deal to work together, which will benefit both of them. Meanwhile, Rory is upset when he gets negative comments about his book, so Zari helps track down who the critic is, and Rory gets more than he bargained for.”

Scroll through the gallery to the right (or click here for direct access) for a sneak peek, then hit the comments with your thoughts on Ray and Nora’s big day!