That’s cold, Grey’s Anatomy. Literally cold. Thursday’s “Snowblind” not only smacked Seattle with a blizzard straight out of The Day After Tomorrow, it threatened to turn DeLuca into an Olaf with better hair. Read on — if you think you can stand the goosebumps — and find out how close Andrew came to actually getting iced. 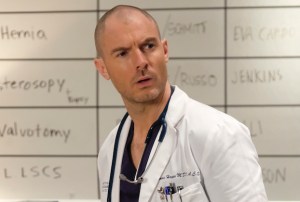 ‘WE USUALLY LET THE PARENTS DO THE SCREAMING ON THIS FLOOR’ | As “Snowblind” began, the storm that raged through Station 19 was still going strong. Levi was running around Grey Sloan looking for a patient of Jo’s named Ms. Anderson (that he’d misplaced!), Jackson was flummoxed by his first tiff with Vic during a phone call, and Meredith texted Alex that she knew he wasn’t really in Iowa. So where was he? In Peds, no sooner had Cormac told his 6-year-old patient’s parents that hurrah, Seattle Pres had a new liver for the youngster than he discovered that he couldn’t get said liver because most of the roads in Seattle were closed. Immediately, DeLuca volunteered to retrieve the organ — on foot. Though Meredith fretted aloud that it was eight degrees outside with a wind chill of minus 15, he assured her that he was used to cold temps — he’d been a cross-country skier. When she further suggested that maybe he wasn’t thinking straight, he pointed out that Cormac had just been yelling on the phone in Peds. Was Hayes sounding like the elder DeLuca now, too?

While Cormac and Meredith operated on the little girl, whose condition was looking, ahem, liver-die, Grey filled him in on the circumstances surrounding her firing and found him to be supportive. They also discussed Cristina and Alex (his MIA co-chief) a little bit, and mid-surgery, learned that DeLuca had made it to Seattle Pres and had just left for Grey Sloan with the McGuffin. Time passing, Mer and Cormac talked about losing their spouses; after he was widowed, he’d run to Switzerland; she’d run to San Diego. Holy crap, just then, DeLuca came in from the cold with the liver — the idiot hadn’t worn gloves for his one-man performance of The Iceman Cometh! And from the looks of his digits, he could lose some fingers — not a great thing for a surgeon! Though Andrew insisted that it was no big deal, Jackson warned that if he didn’t follow his orders starting right then, he could lose one or both of his hands. 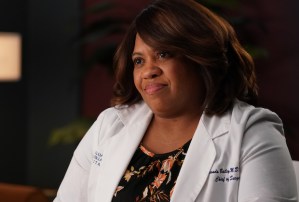 ‘SHOULD I HAVE HIS JOB, LOSING PEOPLE?’ | Entering the doctors’ lounge, Teddy and Maggie tried to keep quiet for the sake of Link, who after awakening on the couch reported that Amelia wasn’t coming to work, much less returning his calls or texts. (Basically, a remix of DeLuca after he’d been dumped by Sam.) Quickly, Maggie shushed Link, lest he let on that Teddy’s fiancé might be Amelia’s babydaddy. So of course, at that very moment in came Tom, who unwittingly said just enough about Amelia’s leave to make Teddy suspicious. Later, Teddy and Maggie teamed up with Owen to treat a pregnant woman whose wife had accidentally hit her with her car. Meanwhile, Bailey’s interest in Joey high as ever, she was upset to learn that Link had discharged the young man and further upset to learn that he’d turned down a chance to speak to a social worker about his options. He was 18, he pointed out. Therefore, he didn’t have to.

Rather than let Joey take a job at the local burger joint, Bailey insisted that he come with her — they’d find him something at Grey Sloan. During her version of a job fair, Joey observed the trauma that went down as Owen made the decision to perform a C-section in hopes of saving the mom-to-be and her baby. She was also going to need heart surgery! (Sheesh!) Miraculously, mother and child both pulled through. Witnessing this, Joey was deeply impressed. Post-op, Teddy admitted to Tom that she was worried that Owen was Amelia’s babydaddy. Sweetly, Koracick reassured the woman that he loves that Hunt loved her and only her; she didn’t have to worry about Amelia. He went on to admit that he knew people disliked him, and he secretly hated it. She didn’t — “I like you… a lot,” she said. (Oh, you could just feel his heart breaking all over again. Or maybe that was just mine.)

‘LET’S SHOW YOUR CLASSMATES WHAT YOU’RE MADE OF’ | In the residents’ lab, Richard finally found a doctor-in-training in whom he could take an interest: Tess Desmond, who hated the way her peers treated their jobs as if they were slumming, working retail. She even impressed him with her compassionate treatment of a patient who was worried about her pets — to the point that he passed over a miffed Helm to let her perform a lap chole. Tess was just about to make an incision when Levi spotted her and raced in — oy, she wasn’t a resident at all, she was his missing patient, Ms. Anderson. Afterwards, Jo and Richard reassured Tess that her kind of cancer was very treatable. But this was her fourth type of cancer — people were losing interest, she said. Everyone’s lives went on, but hers came to a crawl. So the wannabe doctor had seized the chance to live her dream during the storm. Later, Richard encouraged Tess not to give up. If she could survive four cancers, she could definitely finish med school. He also admitted that he was having trouble with his hands — it could mean the end of his medical career. He seemed to think that it did, that was for sure. He gave Tess his stethoscope and said, “I don’t need it anymore.” 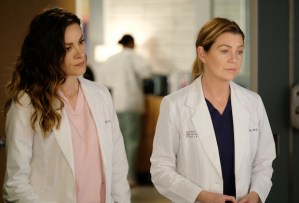 ‘THAT MIGHT HAVE BEEN THE COOLEST THING I’VE EVER SEEN’ | In other developments, things remained tense between Levi and Nico — at least on Levi’s side. Nico, on the other hand, was eager to put behind them the fact that he wasn’t out to his parents. As the hour neared its conclusion, Jackson told DeLuca that the next 12 hours were critical; they’d decide whether he lost a hand, digits… or nothing. Despite the dire situation caused by his stupidity, madness or a combination of both, he hollered at Carina and Meredith when they expressed concern about his mental state. He didn’t suggest that Grey had Alzheimer’s every time she forgot something, he pointed out. Bailey finally asked Joey to live with her family while he finished high school. She had an extra room, extra food, extra love and “a husband who will understand… eventually.” Happily, the teen agreed. After overhearing the new mom’s wife say that she’d seen the baby and “she is so you,” Teddy asked Maggie, “Am I crazy? Am I seeing stuff that isn’t there” in this Amelia situation? “You aren’t crazy,” Maggie replied. (Seriously, has she ever been able to keep a secret?!?)

Jackson and Vic kissed and made up after their spat, but Levi and Nico’s relationship remained… challenged. Levi didn’t feel like their romance was real, given the way his boyfriend kept trying to shut him up with sex. In response, Nico said that he was sick of Levi trying to change him. If he wasn’t enough as is, then… OK, OK, Schmitt said. You’re enough. Then, wait… whaaat? Teddy showed up at Tom’s and freaking kissed him. Oh, Teddy, not cool! Not. Cool. When Ben got home, he was surprised to find Joey playing video games with Tuck. And Jo opened her door expecting to see Alex. It was just Link, though, bringing donuts and despair. Alex “left me,” Jo exclaimed. “I think he woke up one day and felt the need to escape his life and me… I called his mom. He wasn’t there. He’d never been there. He left me… and I can’t… breathe.” Damn, it’s been a rough season for Jo. Leaving Grey Sloan for the day, Cormac asked Mer what DeLuca is to her. “He’s one of my firsts,” she admitted — the first person she’d said “I love you” to after Derek. “I’ve been lonely,” Hayes confessed. He’d never met someone like her, who’d also been widowed so young. It helped. Oh, and BTW, Yang “talked about having a twisted sister,” he added. “I’m guessing that’s you.” Mermac, it is!

So, what did you think of “Snowblind”? Once you’ve stopped shivering, hit the comments with your reviews/observations/critiques.