Takeshi Kovacs, you seem like a whole new man.

Altered Carbon‘s hero has a different face (courtesy of star Anthony Mackie, taking over the role originated by Joel Kinnaman) but the same self-appointed mission at the start of Season 2: Find rebel leader Quellcrist Falconer, his love, whose whereabouts are unknown as the sophomore season’s premiere kicks off.

But the dystopian drama wouldn’t be a dystopian drama if there weren’t several obstacles in Kovacs’ way, including the prospect of a new rebellion that threatens to take over his old stomping grounds: Harlan’s World. Let’s review the highlights of “Phantom Lady,” which — like the rest of Altered Carbon‘s eight-episode Season 2, began streaming on Netflix today. 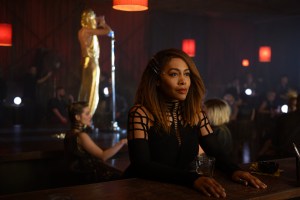 NICE TO SEE YOU | A bounty hunter named Trepp (All Rise‘s Simone Missick) enters a bar, looking Takeshi Kovacs. Poe is there, but all he can say is that his favorite human is on an “epic quest” to find Quell. Pretty soon we find out that Poe’s memory isn’t what it used to be — he’s pretty glitchy — and he’s not supposed to be there: The bartender kicks him out, muttering about “rogue AI.”

Soon, someone else shows up, looking to give Kovacs credits he’s owed. A fight breaks out; eventually it becomes clear that Takeshi is actually the singer currently performing on the watering hole’s stage. When he finds himself in trouble, Trepp has his back and then offers him a job. The only issue? The boss she’s representing is a meth, or one of this universe’s elite, rich, can’t-really-be-killed jerks. Kovacs refuses and walks away, so she shoots him in the back.

AN OFFER HE CAN’T REFUSE | Kovacs’ consciousness is spun up in the virtual subroutine, where the meth boss himself shows him the souped-up new sleeve (aka body) that could be his if he agrees to be the meth’s bodyguard. (Side note: The way he can summon weapons, Force-like, is pretty great, no?) Takeshi is uninterested… until the meth says he knows Quell’s whereabouts. “I can show you where she is, and I can pay you enough, the two of you can disappear,” he promises. As you might’ve guessed, that seals the deal.

But when Kovacs comes to in the re-sleeving pod, it’s under duress. He tries to shake off sleeve sickness as he realizes there are dead bodies around him. And just as he gets to the mirror, someone smashes his head into it from behind. When he’s recovered a bit, Kovacs realizes that everyone — including his new boss — has been murdered. 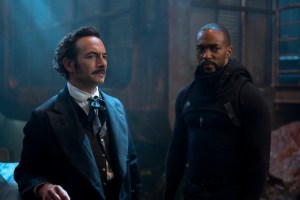 Kovacs activates Poe, who realizes they’re on Harlan’s World, aka the sight of Quell’s original uprising. It’s been 30 years since Takeshi was there last. And he can’t figure out who was gunning for his boss: Meths, by virtue of their near-unlimited resources. are usually pretty untouchable. But if there’s a chance they can find Quell, the former soldier reasons, they have to take it; they agree to stay on-planet.

MEET THE NEW BOSS | Meanwhile, Harlan’s World founder Konrad Harlan has stepped down, and his daughter Danica (Power‘s Lela Loren) is in charge. The rebellion Quell fomented has been going on for decades now, but Danica has brokered a ceasefire with the movement’s new leader, Joshua Kemp. In private, though, she wonders if she’s made the right move.

WELCOME HOME | Kovacs maneuvers himself into a meeting with an old meth named Tanaseda Hideki (The Terror‘s James Saito) who’s the head of an organized crime syndicate. The old man says that he didn’t order the other meths’ deaths, then warns Kovacs that time changes everyone — and it very well may have changed Quell, as well.

A brooding Takeshi gets a new tattoo — a snake — and returns to an abandoned drug warehouse he busted into earlier in the episode. He turns on Poe’s emitter, and the AI runs a program that makes the place look like the Nevermore Hotel from Season 1, just a little dingier. Welcome to the new hangout! 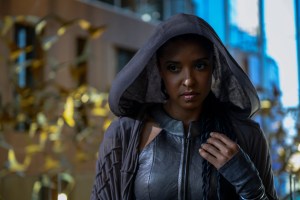 Later, he talks to Quell’s memory, who reminds him that he already has the information he’s seeking. “You have your answer, Tak. It’s in the one place you’re not looking. Our bodies know things,” she whispers. “Feel what you felt, then you can remember what you saw.”

So he re-stabs himself (!) in the chest where part of the broken mirror pierced his skin, and the pain jolts a memory: Quell was the person who attacked him when he woke up in the pod.

“I’m not here for you,” she says in the newly recovered recollection, right before plunging the aforementioned piece of glass into his pec.

Now it’s your turn. What did you think of the episode? Grade the premiere via the poll below, then hit the comments with the rest of your thoughts!