The last time we saw Altered Carbon‘s Takeshi Kovacs, he was turning in hiscurrent body —  which happened to look a lot like Season 1 star Joel Kinnaman — and pondering how he’d find his long-lost love, Quellcrist Falconer.

When we catch up with Kovacs at the start of the sci-fi drama’s Season 2, which begins streaming Thursday on Netflix, he’s undergone some major changes — and new series lead Anthony Mackie says some are more obvious than others.

Yes, there’s the fact that quite some time has passed since Season 1, and thanks to the show’s concept of transferrable consciousness, Mackie (Marvel’s Avengers films) is now playing the futuristic soldier-turned-rebel-turned-gun-for-hire. And yes, there are those cool upgrades to his new body — or “sleeve,” in the show’s parlance — on display in the show’s latest trailer. But the Kovacs who returns to his home planet of Harlan’s World near the start of the season is “more of a vulnerable character” than we’ve previously seen, Mackie explains.

“He has a yearning to be made whole,” the actor says, referencing Kovacs’ ongoing search for Quell (played by Renee Elise Goldsberry), who was revealed as kinda-alive at the end of the show’s freshman run.

“This season is very Shakepearean in the way it’s written, and that’s what I loved about it. It’s very Romeo and Juliet,” Mackie says. 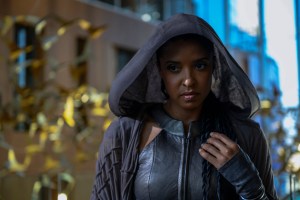 When Kovacs finds himself closer to Quell than he has been in centuries, showrunner Alison Schapker previews, “suddenly, he is actually invested in events in an entirely new way. This is actually a Kovacs who cares about what happens, because there’s a lot at stake for him.”

Mackie adds that “a lot of the aggression, brooding, unhappiness and unpleasantries you saw in the first season goes away, and he’s more emotional and more in touch with himself and what he feels and thinks.”

Don’t worry: There’s still plenty of cool fighting. “Something that we really tried to take even farther in Season 2 is for the action to be very character-revealing,” Schapker says. “We really try to build into our signature fights deep moments of character, so you come away from having not just experienced the adrenaline of watching a killer fight… but also that there were character moments in many of those fights that emotionally affect the characters, and hopefully the audience, as well.” (Word to the wise: This concept comes into play in a big way in Episode 3.) 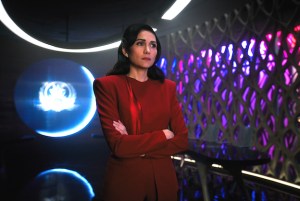 This season’s Big Bad comes in the form of Danica Harlan, governor of Harlan’s World and a meth — aka “Methusalah,” a term for a social class that is rich, elite and virtually impossible to kill by virtue of its members’ ability to transfer their consciousnesses indefinitely. Power‘s Lela Loren plays the slick villain, the offspring of Harlan’s World founder Konrad Harlan.

“What made Danica for me so interesting was exploring this idea of class, and the type of class that exists among the meths, which is so much more extreme than anything we can envision today,” she says. “Danica’s a brilliant tactician, but everything she learned, she learned from her father… Her wealth gives her a birthright to leadership and power, but it also gives her a serious blindspot.”

And when Kovacs shows up on the planet she governs? “At first, he’s a ghost tale. She doesn’t necessarily believe that it’s him,” Loren previews, adding with a laugh, “He’s also seriously disrupting her day and her week!” 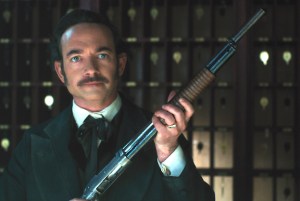 What about Poe, you might ask? Mention of Kovac’s loyal artificial intelligence, played by Chris Conner, causes Mackie to chuckle. “They have a vocabulary and ability to communicate that comes with time, appreciation and love of another person,” he says. “They’ve become the two old men on the porch.”