We knew Eve’s abusive boyfriend was going to show himself on A Million Little Things at some point, but who knew he’d turn up as a barfly at Regina’s restaurant, good-naturedly chatting with Rome and his dad?

And when he does, you can tell from the look on Eve’s face that the Howards’ dreams of becoming parents to her unborn child are starting to die a slow and extremely painful death. Because there’s no way the mother-to-be is going to get away from him now, right? Did you see the way he nearly frog marches her out of the restaurant?

Meanwhile, Maggie has a humiliating blind date, and Eddie talks Dakota out of doing something really, really stupid. (Pot, kettle, eh?) Read on for the highlights of “The Lunch.” 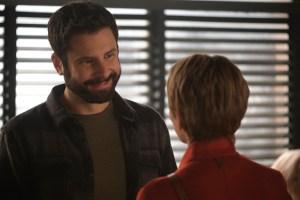 IMAGINE MEETING YOU HERE | Gary has a new freelance job, assigning value to people’s lives. And when working from home starts to drive him a little batty, he relocates to Someday. Unfortunately, that’s the same place that Maggie has has chosen for her first date with a guy from the app. She freaks. She asks him to leave. She renegs on that request when things get awkward. He’s oddly, overly supportive of her getting back into the dating game. It’s so cringeworthy, their entire interaction, up to and including when he says, “Have a great date, buddy!” and returns to his table.

But the guy never shows, and an upset Maggie takes it out on Gary, who can’t seem to stay out of her personal space. “I am humiliated,” she tells him, “and the last person I wanted to be humiliated in front of was you.” Eventually, Regina brings over a bottle of wine and tells Mags that her date sent it as an apology for his no-show. But Maggie almost immediately accuses Gary of the gesture. Gary denies it, so Regina confesses that she sent it to make her friend feel better. But later, we learn that Gary actually did buy the bottle for Maggie to soothe her hurt feelings. And Maggie eventually tells Regina that she kinda wishes Gary had sent it. Oh you two love-crazy kids, get it together! 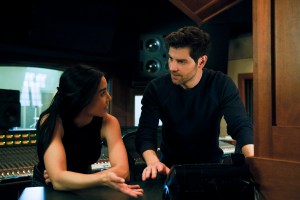 THE HAND THAT FEEDS YOU | Dakota and Eddie excitedly send Trevor some cuts from Dakota’s album. But when the record-company exec has notes, Dakota snidely rejects them and eventually walks out. Eddie begs Trevor to give the young artist another shot — despite the fact that she called Ed “a washed-up yes-man who will do anything to stay relevant” — then finds her drinking at a bar. She confesses that her name is really Christine, and she grew up in North Dakota where everyone used to make fun of her “for thinking I could be someone.” He recognizes her “my album, my way” schtick as self-sabotage because she’s scared, then eases her back into the studio to record the songs — and address Trevor’s notes — in a way she can feel good about. 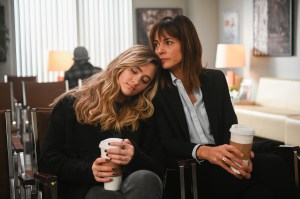 THEY GROW UP SO FAST | Delilah psychs herself up to confront Sophie about the pot Gary found in her sleeping bag, so she’s shocked when the teen immediately says she knows what her mom wants to discuss… and assumes it’s her use of birth-control pills. D is shocked, and only slightly relieved when Soph says she and Jake aren’t having sex yet.

When both Sophie and Jake disappear from Someday, Delilah runs over to his apartment, thinking she’ll catch the pair in bed. But it turns out Jake’s appendix needs to be removed. After Sophie and Delilah get him to the hospital, they use their time in the waiting room to talk about whether Delilah loved Eddie (“I did, but I realize now we were both lost so we leaned on each other,” she says, calling the entire affair a “mistake”) and about Sophie’s feelings for Jake (he told her he loved her; she thinks she loves him, too). But when Delilah brings up the joints Gary found, Sophie has a weird look on her face… and we don’t get the rest of their conversation in this week’s episode. (They’re totally Colin’s, right? That dog is just too chill.) 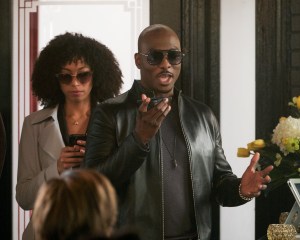 A GREENLIGHT FOR ROME? | Remember Isaac Martin, the movie star who wants to make Rome’s movie? He’s in Boston for the day and wants to have lunch and talk shop. Only problem is that Rome’s supposed to hang out with his dad, Walter. So Rome cancels plans with his pop, but Walter shows up at Someday anyway. (Seriously, is there no other restaurant in Boston? Everyone is there!)

Walter meets Isaac and Eve, who’s working, and generally is an embarrassment to his son. “It’s like you don’t want me to succeed,” Rome hisses at the older man at one point, leading to Walter’s eventual decision to go home. Of course, Rome immediately feels bad about how he treated his dad, so he bails on Isaac to apologize to and spend time with the grieving senior. This move impresses Isaac, who later calls Rome and tells him “Don’t ever apologize for having your priorities in order.” Yep, Isaac’s signing on to Rome’s movie! (Side note: The pessimist in me says that the movie and the adoption will fall through in quick succession. But here’s hoping they don’t!)

Speaking of the adoption: Rome and his dad are joking around with one of the guys at Someday’s bar when the man sees Eve and gets all excited: Yep, it’s Derek, and he seems happy to see her and happy that she’s pregnant. She says she’ll go with him; Regina walks Eve to get her coat and says she can call the police. But Eve thinks Derek won’t sign away his parental rights if they involve the cops, and she thinks she can sweet-talk him into doing it. Then Derek guides Eve out of the restaurant with his hand on her the whole time, and I get a very bad feeling in the pit of my stomach. Rome and Regina look on, horrified.