Warning: The following contains spoilers for Wednesday’s Chicago Fire/P.D. crossover. Proceed at your own risk!

Chicago Fire and Chicago P.D.‘s crossover event took a dark turn on Wednesday night, when it was strongly implied that Sean Roman (guest star/former P.D. series regular Brian Geraghty) was responsible for the murder of his sister’s drug-dealer boyfriend. Roman took justice into his own hands after he and Burgess discovered his younger sister’s frozen body in the snow. But rather than questioning or arresting Roman, Voight let him go, saying, “Logan Peters deserved what he got. As for the person responsible, we’re going to continue our investigation, but it’s no longer a top priority.”

“I think it’s like any good movie: There’s a vigilante. They’re actually doing, by the law, the wrong thing, but I think you’re kind of rooting for them,” Geraghty says of Roman’s actions. “I hope that the audience, in that case, would realize that [Roman] was doing it out of love.”

As for Voight’s decision to let Roman off the hook, which is not an uncharacteristic move for the morally gray Intelligence sergeant, “I liked the ending, because it’s such a Voight/Chicago P.D. ending,” Geraghty notes. “‘Bad people will not prevail’ is kind of the message. That good people will prevail, regardless of what the actual law says. So I enjoyed the ending. I thought it was fun. I thought it was a bit risky, too.” 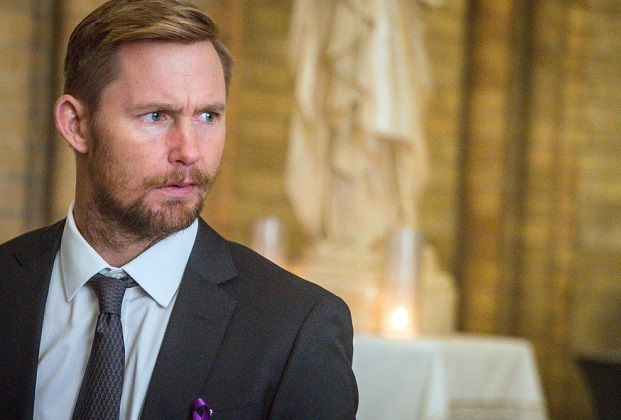 Speaking of risk, in light of what Roman and Voight did, could the former beat cop one day make a return to the Windy City? Or would any reappearance prove to be too dangerous? “Not if the investigation’s thrown out,” Geraghty replies. “It doesn’t matter if he’s in Chicago or not. If they want to find the information, they can find it. I think it’s one of those episodes where the case is closed, like Voight says.” So while Roman is “not gonna be hanging around by the police station any time soon,” Geraghty believes the ex-cop could come back to his old stomping grounds after “enough time goes by.”

After hearing Roman’s brutally honest eulogy at his sister’s funeral about carrying one’s sins so we can do better next time, Burgess was able to finally forgive herself a little bit. “I think you’re right. Maybe we should be required to carry this pain,” Burgess said to Roman. “But then don’t we get to decide what we do with it?”

The “idea of absolution” that Roman spoke about in his speech “really resonated with Burgess and helped her, on some level, feel better about her own situation,” P.D. showrunner Rick Eid explains. “Burgess carried around a lot of guilt about what happened and blamed herself, and I think hearing his eulogy helped her.”

What did you think of the crossover? Grade it below, then hit the comments!