Warning: The following contains spoilers for Wednesday’s Chicago P.D. Proceed at your own risk!

On Wednesday’s Chicago P.D., Burgess’ pregnancy took a tragic twist when she lost the baby following a brutal beating from a sex trafficking ringleader.

After tracking one of the underage victims to a motel, Burgess called for backup — but the cries of the girl forced the officer to rush in before help arrived. The suspect then attacked Burgess, punching, tossing and slamming her until she shot him. Burgess was able to save the girl, who was underwater in the bathtub, which is where Upton found a bloody Burgess clutching her stomach. When Ruzek arrived on the scene, he scooped his pregnant ex out of the tub as she cried in his arms. But at the hospital, Burgess was stone-faced, starring blankly out the window as the doctor told her the baby was lost. She didn’t even react when Ruzek sat down next to her on the bed to comfort her.

Below, star Marina Squerciati talks about filming the difficult fight sequence and previews how Burgess’ emotional shutdown will give way to a “violence of emotion” with Ruzek.

TVLINE | How did you feel when you got the script and you found out she was going to lose the baby?
I felt devastated and, alternatively, excited, because I thought it was so well-written, and there are so many things to play in this wonderful script that Gwen [Sigan] wrote. So as an actress, I was thrilled. As Burgess, it’s pretty awful.

TVLINE | Could you see a scenario where she could have balanced having a family, doing this modern-day version of parenting with Ruzek, and her job all at the same time?
Sure, I think they would have killed it as co-parents. I feel like they’ve been through the wringer. They’ve been in a relationship, out of a relationship, been engaged, been out of engagement, and they’re still kind of friendly and have this lovely relationship again. If anyone could do it, they could have, which makes it sort of all the more tragic.

TVLINE | It always felt like Burgess was struggling with how she was going to do this while also remaining an active part of Intelligence and not sacrificing her career.
Yeah, I think that’s a struggle that every woman has, right? Even when I had my kid, how do I do this without sacrificing my career, which I love so much? She has the added [factor] of putting yourself in harm’s way, and how do you reconcile that when you have a child? I don’t know. That’s something I hadn’t unpacked yet.

TVLINE | I rewatched part of the ending, but I couldn’t bring myself to rewatch the fight scene because it was so brutal. What was the experience like shooting that scene in the bathroom and the bathtub?
It was one of the longest fight scenes we ever had. Normally, in a scene, you shoot directionally. You do one side wide, then you move in closer, then you turn the cameras around, and then do the other side wide and then closer. That’s the basic rudimentary way to put it. The problem was that once you get wet, you can’t really get unwet. So the water added this crazy element, and so we had to shoot one way up until the water, shoot the other way up until the water, and then shoot the water. … It was incredibly violent and horrible to shoot, as well, and hard, and everyone’s working, everyone’s mopping up water and changing my clothes and changing my makeup. It’s a real testament to the crew that we were able to do this this well and that it worked so well.

TVLINE | How much of the fight choreography did you get to do?
Oh, that’s all me except for after we’re on the door and he is hitting me and he throws me to the ground. That’s the one thing they didn’t let me do. So everything else is me.

TVLINE | That must have been quite a mentally and physically taxing day for you.
It was. Sometimes, Tracy [Spiridakos] and I, after fight scenes, exchange photos of bruises. [Laughs] We both bruise like a summer fruit, and we’re like, “Can you beat this one? Mine’s the size of Texas.” “Well, mine’s the size of California.” 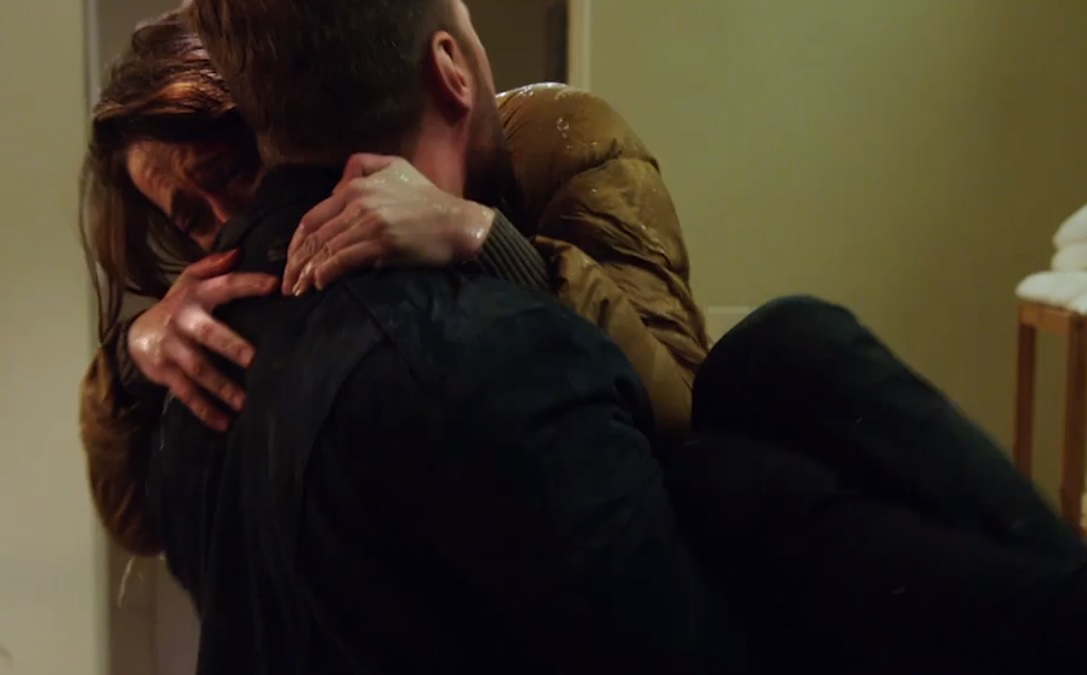 TVLINE | The scene where she’s in the bathtub and she’s starting to cry as Ruzek comes in and picks her up, it’s so powerful. What was the direction that you got for that moment from either the script or the director?
Well, actually, in the script, he was supposed to come into the bathtub with me and sit with me until help arrived, and Paddy [John Flueger] was like, “Nope. I can’t do that. I have to pick you up and bring you to the hospital.” So that was something we had to kind of work out with the writer and make sure she was OK with that. She had written this beautiful scene, and we wanted to respect it. But ultimately, she was OK with him picking me up and taking me away, which is exactly what Paddy, as a man, would do and what Ruzek, as a man, would do. It was a dance. Everyone was working really hard to make it work.

TVLINE | How is Burgess handling the trauma moving forward?
Not great. [Laughs] 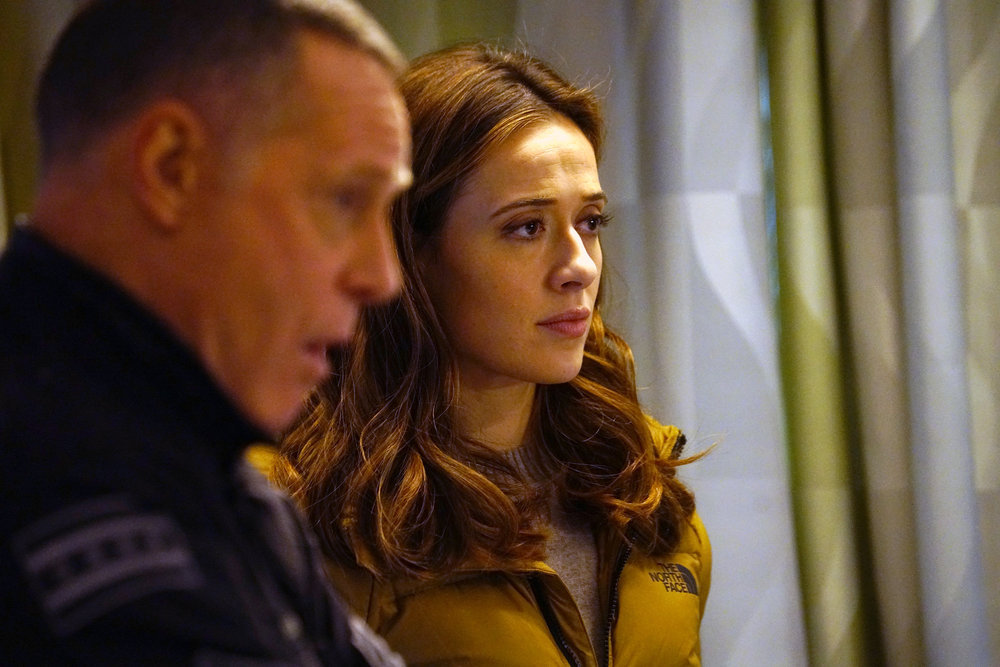 TVLINE | What kind of a mindset is she in in the next episode?
We’ll have a couple scenes with Voight and Adam, and what she kind of tells them both is that she needs to be alone for a while, in different ways. The way she speaks to Voight, it’s interesting. She sort of opens up more to Voight than she does to Adam, because I think opening up to Adam right now is too painful.

TVLINE | I was hoping that the fact that she didn’t push him away when he sat down on the bed was a good sign that she was going let him be there for her.
Yeah, maybe someday. [Laughs]

TVLINE | Does this unfortunate experience change her mindset at all about her job and her personal life?
Yeah. How could it not, right? I think the show is still exploring in what ways she’s affected, but right now, I think she’s pretty closed off from everybody.

TVLINE | Is she going to a dark place? Should we be worried?
I don’t know. Maybe more reckless than dark.

TVLINE | Does any part of her feel guilt about what happened?
Yeah, for sure. That’s gonna come up in a couple episodes, as well, and it’s sort of a violence of emotion with Ruzek. 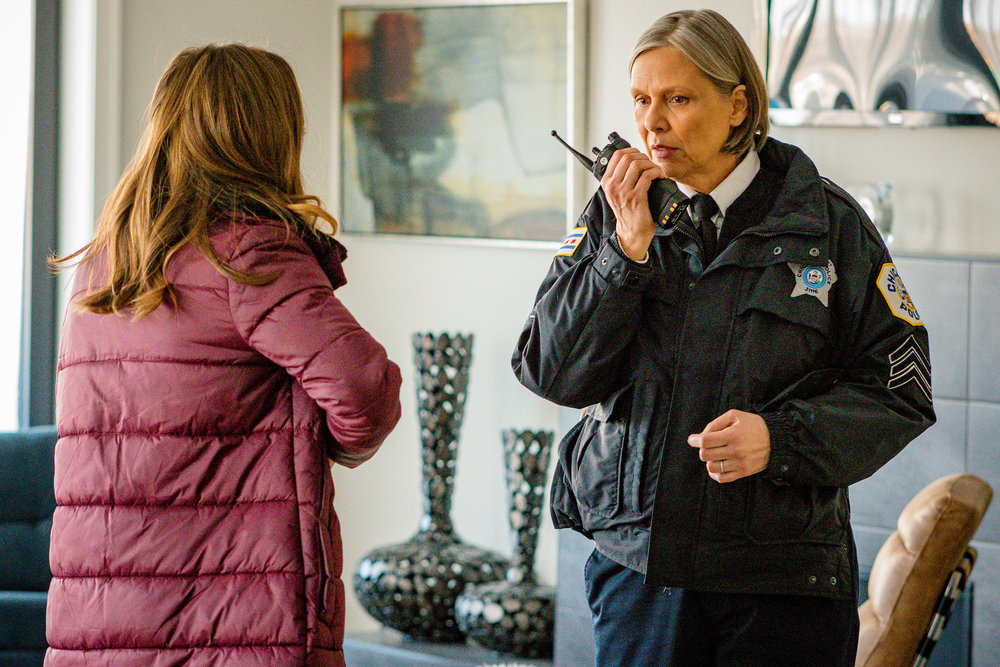 TVLINE | One of the nice parts of this episode were the Platt and Burgess scenes. Might Platt be someone whom Burgess will rely on more in the coming episodes?
I think Burgess will shut down, and Platt will definitely try and make her reach out. The people who love her see what’s happening, and they’re trying to throw her a lifeline, and she’s just not accepting it.

TVLINE | And for those “Burzek” fans who’ve just been holding out for season after season, what final message would you give to them?
Hope is not lost.