When Maggie attempts to move on in her romantic life during Thursday’s A Million Little Things (ABC, 10/9c), she won’t get far before running into a bearded, wisecracking roadblock in the form of her ex-boyfriend… who just happens to be at the same restaurant where she’s supposed to meet her lunchtime blind date.

“The date already stirs up a lot of insecurities for Maggie, because she hasn’t been dating in Boston at all outside of Gary,” series star Allison Miller tells TVLine. “So she’s already nervous, and it already feels like treacherous territory. And with Gary being there, it highlights everything about Maggie that they share, which is their cancer diagnosis and their discomfort in their own bodies.” She sighs. “He is getting the front-row seat to her discomfort, and it’s mortifying… It’s just an exercise in torture.” 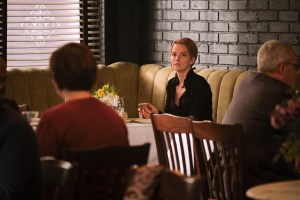 What we know but Dr. Bloom does not: Gary is still pining for Maggie in an all-encompassing, heartbreaking, having-romantic-fantasies-in-the-Top-of-the-Hub-elevator kind of way. Meanwhile, the more measured therapist is “living in a cerebral phase right now,” Miller notes, quickly adding, “and that can’t go on forever.”

She previews that, as tensions ease between the exes, “You’ll see more of them with everyone else. It starts to develop into the group, more than just Gary and Maggie being buddies. [It’s like], ‘OK, now we can all be in the same room together and support our friends and [tell] some jokes.'”

Still, “I don’t know if they’re going to be able to have any one-on-one palling around, going-to-the-beach-and-having-hotdogs kind of a friendship,” she clarifies. “Not yet, anyway.”

Do you think Gary and Maggie should reunite or move on? Let your thoughts be known in the comments section!