Warning: The following contains spoilers for Sunday’s midseason premiere of The Walking Dead. If you’d prefer to watch first, read later, make like a walker and lumber away.

Sunday’s midseason premiere of The Walking Dead was a dark day for our heroes — and not just because the bulk of it was spent in the cave in which Carol had gotten herself and her pals trapped. (Oh, Carol!) By the end of “Squeeze,” it looked like two of the good guys wouldn’t be making it out alive. What’s more, the hour teed up a “seduction” that was so disturbing, you almost kinda-sorta wished that it, too, had taken place in the dimly-lit cave. Who got it on? And who appeared to have been buried alive? Keep reading… 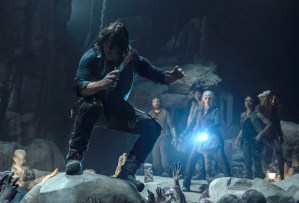 ‘IF I ONLY KNEW WHAT YOU TOLD ME, I WOULDN’T KNOW S—‘ | The episode began right where the midseason finale left off — with seven of our heroes stuck on a ledge in a cave above Alpha’s horde. Realizing that she’d not only been led into a booby trap by Alpha but had led her friends into one, too, Carol emitted the same scream that we had when she was ignoring all of the “Wait, This Seems Too Easy! Think Twice!” red flags that were waving as she’d chased after the Whisperers’ leader. Shortly, Daryl spotted enough tall rocks between them and what might have been a way out for them to kinda Frogger their way past the horde. Even Kelly made it on her injured ankle. Once they were out of immediate danger and camped out for the night — afternoon? Inside the cave, they couldn’t tell — Daryl expressed his frustration with Carol. He wanted to be there for her, but she wouldn’t let him. (And look where that had gotten them!) “I don’t just want to kill Alpha,” she finally admitted. “I want her to regret everything, beg for forgiveness, and then I want to kill her.” Daryl understood but reminded her that her vendetta had begun to put people for whom she cared about in harm’s way. “We fight for our future,” he added. “We don’t fight for revenge.” At last, she promised that he needn’t worry anymore; they were on the same team (and, it seemed, back on the same page). Just then, a group of Whisperers attacked, which was more of a good thing than bad, because once they’d been dispatched, Jerry noticed an arrow scrawled on a wall that might as well have been marked “Exit — This Way.” 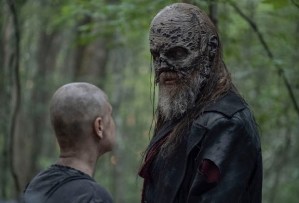 Meanwhile, at the Whisperers’ camp, Alpha reported that the good guys had known exactly where to look for the horde; they must have been sending looky-loos around, she deduced. So she sent Gamma off to inform their border patrol that they wouldn’t be liking their next performance reviews. The following morning, Negan interrupted Alpha’s latrine break to suggest that Gamma might be feeding intel to the enemy. Alpha didn’t just reject his theory, she rejected it by threatening to take his family jewels and sending him stumbling backward into the ditch that served as the Whisperers’ toilet. (Somehow, I don’t think this was what EP Angela Kang meant when she said that Negan planned to become “King S— Motherf—er” again.) Back in the cave, Daryl & Co. soon made their way to a narrow tunnel through which they had to crawl in order to exit. Though Carol’s claustrophobia made her that driver in front of you who’s always tapping the brakes for no reason, it was Jerry who really had a reason to panic. The last in line through the tunnel, he got stuck — with walkers nipping at his heels, no less. Thankfully, when Daryl willed him through the tight space, it was reported that the walkers hadn’t managed to chew through his boots. (Whew. I love me some Carol, but even I would’ve been pissed if her mid-tunnel freakout had gotten jovial Jerry killed!)

‘IF SHE’S BETRAYED US, I WILL KILL HER’ | Despite Alpha’s seeming dismissal of Negan’s theory about Gamma, the Whisperers’ leader feared that he was right. Upon learning from Beta that Gamma had never made it to the border, Alpha ordered her second in command to track her down and bring her back. As he had been for some time, he was eager to put Gamma down. But “I will deal with her,” Alpha insisted, “and the pack will watch.” No sooner was Beta gone than Alpha ordered Negan to walk, eyes forward, to a clearing and remove his clothes. Sensing that his number was up, he blathered on about his accomplishments as he stripped down, then turned around to find… holy crap. Alpha, naked except for her mask. “You’re a crass man,” she said. “I reckoned you might appreciate a crass reward” for fingering Gamma as the spy. When he inquired whether she was going to keep her mask on, she replied, “Does my true skin disturb you?” It didn’t. “Not at all,” he said. “Weirdly, the opposite.” With that, they kissed as a precursor to what had to be one of the freakier sex scenes never aired on television. 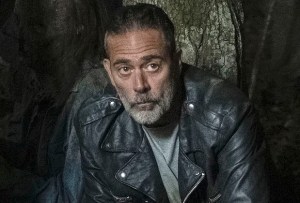 Back in the cave — yes, even after the tunnel, our heroes were still in the cave — Daryl & Co. moved debris from what looked like the mine set from Chilling Adventures of Sabrina. Kelly found a handy box of dynamite, but it was quickly deemed too dangerous to mess with, so back to moving debris and digging out everybody went. Magna was particularly driven in her task, not because she hated clutter but because, as she told Aaron, she was anxious to get home and make things right with Yumiko. After a while, Daryl noticed that Carol had gone missing — and so had the dynamite. Dammit! She’d snuck off to plant TNT above the horde and, in the process, nearly plunged to her death. Daryl saved her, but in doing so, a stick of dynamite fell and exploded, threatening to bring the cave down on their friends. Moments later, a second explosion did start a cave-in, but everyone made it out except for Magna and Connie, who’d stayed behind to fight Whisperers. Understandably, Daryl and Kelly were bereft. But they couldn’t stick around to try to dig their loved ones out; that explosion was going to draw walkers from miles, Kelly noted. Carol, um, made it all about her, begging Daryl to RSVP yes to her self-pity party and blame her (which he had every right to do!). Instead, he brushed her off, sent the others home to report that they’d found the horde, and took off on his own to find another way into the cave.

So, what did you think of “Squeeze”? Does anyone really think Magna and Connie are dead? Grade the episode in the poll below, then hit the comments.