Supergirl celebrated a major milestone on Sunday by granting its titular heroine her heart’s desire: the chance to patch things up with Lena. (The twist-tastic episode also killed off everyone Kara has ever cared about, but come on, let’s focus on the positive here.)

The epic do-over came courtesy of Mr. Mxyzptlk, who now looks suspiciously like the non-Matthew Perry half of CBS’ Odd Couple reboot. As he explained, his previous exterior — that of actor Peter Gadiot, who portrayed the character in Season 2 — was merely a disguise with which to charm the Girl of Steel. This is his true form. What’s more, his powers now only work to help those he has previously wronged. And wouldn’t you know, Kara is the last victim he needs to check off his list.

But what could she possibly want from the treacherous trickster? Simple: “Your best friend thinks she’s your enemy,” Mxyzptlk reminded her. “The worst part? It’s your fault.” It was a low blow, for sure, which is probably why Kara took her first available opportunity to zap him back to the Fifth Dimension.

Eventually, though, the possibility of patching things up with Lena became enticing enough for Kara to form a temporary alliance with the interdimensional imp. Let the games begin!

FIRST ATTEMPT | To say that Kara’s adventures through time and space got off to a rough start would be a grave — actually, make that Graves — understatement. She first traveled back to Season 4, shortly before she and Lena were attacked by Mercy, to drop a bomb of her own. “You shouldn’t have to be so cynical,” she told Lena. “The world has made you cynical because you’ve been betrayed so many times. By your mother, your brother… and now me. I’m not who you think I am. I’m… Supergirl!”

Lena was understandably taken aback by this revelation, and since she no longer had Kara to confide in, she hightailed it to Metropolis for a one-on-one with Sam. “If the real Kara thought I was a villain, maybe that’s all I really am,” she said, though Sam was quick to remind her that she’s always been a hero at heart. “Thank you. I really needed to hear that,” Lena replied.

This could have marked the end of Kara and Lena’s troubles, were it not for another plot that had already been set into motion. It was around this time that Agent Liberty (ugh) poisoned the atmosphere with kryptonite. Lena was able to save Supergirl in the original timeline, but now that she was in Metropolis visiting Sam, she simply couldn’t get to the DEO quickly enough. (For the record, that scene of Alex visiting Kara’s grave is something I never want to revisit. Now I know how all you Arrow fans felt.) 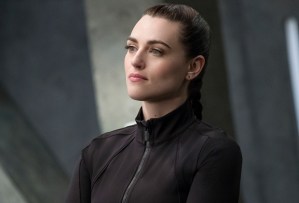 SECOND ATTEMPT | This time, Kara poof’d back to the moment in Season 3 when she asked if Lena still possessed any kryptonite. Her perfectly logical theory suggested that Lena might agree to stop using it if she knew that it put Kara — not just “Supergirl” — in danger. And while she was technically right, it only hurt her in the long run, as Lena opted not to join the fight against the Worldkillers.

In this timeline, Mon-El never returned to the future, so Kara was able to consult her old squeeze about the Lena situation. Poofing back to that infamously violent night at Sam’s mom’s house, Kara asked for Mon-El’s interpretation of Lena’s reaction. “You deserve the same compassion that you show others,” he concluded. (I might have laughed when Mxyzptlk told Kara, “I never understood what you saw in him,” but I really do miss Mon-El. And Kara clearly feels the same way, based on the way she looked at him. Darn you, thirtysomething sequel!)

OK, here’s where things got a little nuts: Reign showed up and tried to kill Sam’s mom, but she was thwarted by Lena, who crashed the party with a new (Kryptonite-free!) invention to free Sam from the Reign’s control. And it worked… until it didn’t. After just a few seconds, Reign was back in the driver’s seat — and Lena was her first casualty. (Gasp!) Mon-El was able to take her down, but not without also sacrificing himself in the process. (Double gasp!) 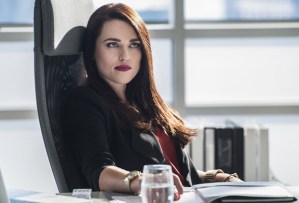 THIRD ATTEMPT | With two colossal failures under her belt, Kara left nothing to chance this time, poofing back to the moment she first bonded with Lena in Season 2. Not only was this version of Lena not angry about Kara’s secret, she was thrilled! “My cousin and your brother, they got it wrong,” Kara explained. “Imagine what we could do together, a Luthor and a Super working as a team.” Sadly, this positive outlook proved to be short-lived.

Cut to Lillian’s high-profile trial, where Lena was asked to reveal Supergirl’s secret identity on the stand. She refused, naturally, catching the ire of one Ben Lockwood. His wife, son and father — under the guidance of cult leader Thomas Coville — all jumped to their deaths, believing that Supergirl would save them. “If people knew who she was, they would stop worshipping her,” Ben explained. But when Lena still refused to out her bestie, she and Thomas were kidnapped by Otis, another face I never wanted to see again.

Putting Lena’s safety above all else, Kara held a press conference announcing herself as Supergirl, but this only led to more heartbreak. She learned during a subsequent news report that Agent Liberty’s followers targeted everyone in Kara’s inner circle, including Cat Grant. There were — pause for more gasps — no survivors. 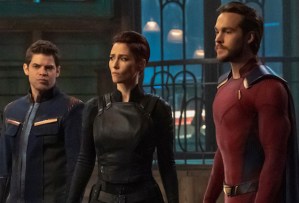 FOURTH ATTEMPT | Then came a radically different approach to the problem: “I think Lena would be better off if she and I were never friends,” Kara suggested, at which point she was dropped in the middle of a war-torn National City which Lena ruled with an iron fist (and some pesky H.O.P.E. attack robots).

Even with Winn and Mon-El around, this reality was no bueno, so Kara was forced back to the drawing board. To be fair, that took a little more effort this time, as Lena was harnessing the Fifth-Dimensional energy that Mxyzptlk needed for his magic tricks. Fortunately, everyone (mostly) managed to pull through this time.

IN CONCLUSION | So, what did Kara learn from her misadventures through time and space? Apparently no amount of edits to their past can fix what has become of her and Lena’s friendship. In fact, Kara told her as much during one of their more troubling balcony chats.

“I made a mistake in hiding my identity from you,” she said. “But the past is the past, and I can’t change it. Whether you forgive me or not, that’s your choice, just like it’s your choice to work with Lex. I’m done blaming myself for your bad decisions.” She explained that Lena is now accountable for her own actions. “If you forgive me, I’ll be there for you. But if you continue to work with Lex, I’ll do whatever I can to stop you — just like I would do to any other villain.”

Your thoughts on Supergirl‘s 100th hour? Which returning face were you the most excited to see? And which do you hope you’ll never see again? Grade the milestone episode below, then drop a comment with your thoughts on the state of the series.