The ball — make that the sales pitch — will be in Maria Sharapova‘s court when the tennis pro-turned-entrepreneur sits in on an upcoming Shark Tank, and we’ve got your exclusive first look at the episode.

Sharapova will join the Sharks for the Sunday, Feb. 28 hour (ABC, 9/8c). The photos at the top and bottom of this post show her interacting with regulars Mark Cuban, Kevin O’Leary, Lori Grenier and Daymond John as they field presentations from wannabe millionaires hoping the Sharks will fund their fledgling businesses.

Per the official synopsis, the episode’s lineup of prospective products and concepts includes a “stylish weighted design” that adds resistance to workouts, a type of dog food that promises to make pets “excited to eat,” and an event space that centers around “an American family-favorite game” — this likely is related to the ping-pong photo below.

Then there’s the New York City entrepreneurs who “introduce their multipurpose hair and skin-softening product for the nether regions.” (Does that have anything to do with the T-rex photo below? We have no idea.)

Scroll through the photos below to get a sense of what Sharapova’s time in the Shark Tank is like, then hit the comments: Do any of the concepts outlined above sound like sure things to you? 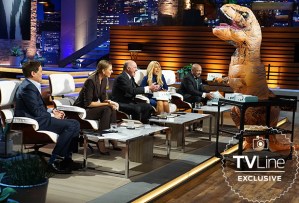 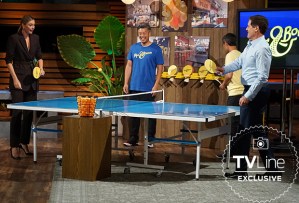