“You thought the war was over?” a character intones menacingly within the first five minutes of Hunters. “No, dear. Only the dead know the end of war.”

The scene — and the carnage that ends it — sets the tone for Amazon’s newest drama, which chronicles a grassroots team’s take-no-prisoners efforts to eradicate Nazis who have infiltrated America. Viewers are brought into the action after tragedy befalls a Jewish teen named Jonah (played by the Percy Jackson films’ Logan Lerman); in his attempts to achieve justice, Jonah finds himself making the acquaintance of the avuncular Meyer Offerman (Scent of a Woman‘s Al Pacino), who isn’t quite what he first seems. The audience later learns that that description also can be applied to a bunch of Offerman’s friends.

TVLine spoke with executive producer Nikki Toscano — who co-showruns the series with creator David Weil — about Season 1, which begins streaming today. (Get Out‘s Jordan Peele also is among Hunters‘ executive producers.) Read on for the essentials. 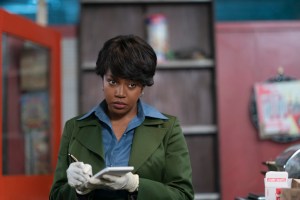 THE TIME PERIOD | Most of the show’s action takes place in 1977, with flashbacks to the lead-up, fighting and aftermath of World War II.

THE RELEVANCE | “We are very aware about the fact that we would be drawing a parallel to today, and it wasn’t something we were shying away from,” Toscano said, noting that the show’s Powers That Be were “very aware” of the prevalence of anti-Semitism and racism around the world. “In fact, the entire purpose of the piece is to look at this band of others, be able to put yourself in their shoes and to be able to see anybody as a superhero — whether you’re Black, whether you’re Jewish, whether you’re Japanese.”

THE ‘SPECTRUM OF EVIL’ | Don’t worry that Hunters might try to make you feel bad for its villains: “There was never any intention, and I can speak for David and myself, in trying to humanize these Nazis,” Toscano said. “What we attempted to do was present a spectrum of evil. On one side is the egregious, sadist, torture-people-for-sport [Nazis]. And on the other side are explanations that say, ‘I was just a kid.’ ‘I was just following orders, that’s why I was so evil.'” She added: “What we presented was that there may be differences between them.” 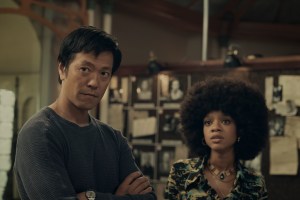 THE HUNTERS BECOMING THE HUNTED | As Jonah becomes more embroiled in Offerman’s plan, Toscano previewed, he’ll reach a point where he has to decide whether the ends of his work justify the means. “All of these hunters who have come together, who have been persecuted in different ways, are examining that very dilemma,” she added. “You become the monster you’re hunting… What is the cost of this violence, and do you have to sacrifice your soul for the greater good, so to speak?”

PACINO’S COMMITMENT | The series’ biggest star was so dedicated to nailing all of Meyer’s details, Toscano said, he stayed in character throughout shooting. “Al is very, very Method, and very, very serious about his craft,” she said. “I think that seriousness and that love for his craft compels him to stay in character.”