Fellow Earthlings, we’re in for a bittersweet return to Roswell, New Mexico.

When the CW drama’s second season premieres on Monday, March 16 (9/8c), our girl Liz (Jeanine Mason) finds herself torn between the devastation of Max’s (Nathan Parsons) recent sacrifice and the unfathomable return of her sister (new series regular Amber Midthunder).

Per the episode’s official synopsis, “Liz suppresses her grief to focus on moving out of Roswell with Rosa.” (Excuse me, move out of Roswell? On Roswell, New Mexico? Good luck with that.) Then comes a most unfortunate twist: “Liz makes an alarming discovery after Rosa begins experiencing mysterious side effects from her resurrection.”

Meanwhile, Isobel (Lily Cowles) “focuses her attention on honing her alien powers” in the wake of her brother’s untimely demise.

Click here to see exclusive shots of Liz enjoying an emotional moment with her dad and Maria (Heather Hemmens), as well as a closer look at Isobel’s fierce funeral fashion. We also have a bonus sneak peek of Alex (Tyler Blackburn) and Michael (Michael Vlamis) locked in what appears to be a serious lover’s quarrel. Perhaps it has something to do with the “self-destructive way” Michael chooses to cope with Max’s death. 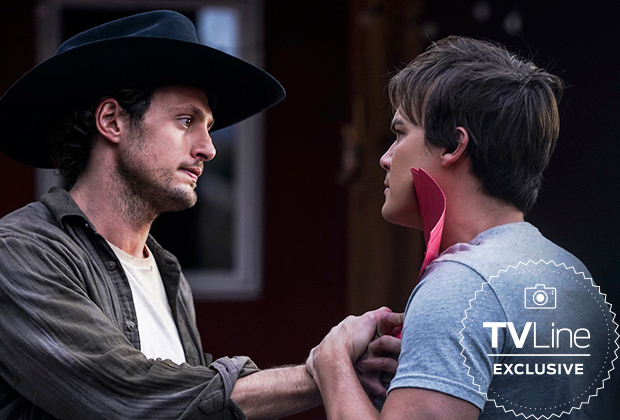 The season premiere, appropriately titled “Stay (I Missed You,” was written by executive producer Carina Adly MacKenzie and directed by Lance Anderson.

Browse our gallery of exclusive first-look photos from Roswell, New Mexico Season 2 — you can click here for direct access — then drop a comment with your hopes for the series’ long-awaited returning below.