The seven-episode series, from Murphy and frequent collaborator Ian Brennan (Glee, Scream Queens), will chronicle the lives of Hollywood hopefuls in the 1940s. Per the official description, “Each character offers a unique glimpse behind the gilded curtain of Hollywood’s Golden Age, spotlighting the unfair systems and biases across race, gender and sexuality that continue to this day.”

When Hollywood got a green light from the streamer in 2019, Ryan described the series as a “love letter to Tinseltown.”

In addition to Hollywood, Murphy has several other projects in various stages of development at Netflix. They include Halston, a series starring Ewan McGregor as the legendary fashion designer; Ratched, a One Flew Over the Cuckoo’s Nest prequel starring Sarah Paulson as the titular nurse; The Boys in the Band and The Prom.

Will you watch Hollywood? Peruse some art for the series below, then hit the comments with your thoughts! 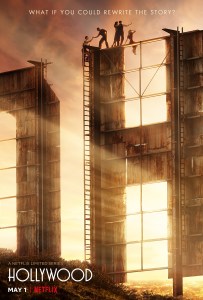