Grey’s Anatomy’s Maggie was right all along: Camping is a bad idea. In Thursday’s episode, Jackson and Jo had occasion to work on a couple of patients who were mauled by a bear and rescued when Station 19’s firefighters went overnighting in the woods. And, in perilous situations that drew at least a little less blood, DeLuca was put (way!) out when Meredith took over Suzanne’s perplexing case, and as you were forewarned, Levi learned that Nico didn’t want his parents to meet his boyfriend. Perhaps not surprisingly, by the end of the hour, two couples had broken up — but not necessarily the two you might’ve expected. Who called it quits, and why? Read on…

‘I THOUGHT THE NATURE WOULD BE COMFORTING’ | As “A Diagnosis” began, unhappy campers Rachel and her poor, noseless husband Scott were wheeled into Grey Sloan as Maya arrived with his schnoz and caught Carina’s eye (which resulted in their flirtation at the end of S19). As news of the grizzly case spread throughout the hospital, Jo wondered aloud to Link if she and Alex were dealing with a surprise bear situation of their own. (Way to make it about you, Jo!) She also managed to make Link wonder whether Amelia’s brain tumor was back. Nearby, Scott learned that his nose had been — wait, whaaaat? — implanted in his arm to keep blood flowing through it till Jackson could reattach it in its, er, usual place. As if that wasn’t insane enough, a couple of rooms away, Rachel was being reunited with her… worried lover Brian?!? (Yeah, Grey’s had the crazy turned up to 11 Thursday!) Turned out, she had intended to tell Scott she was in love with Brian on their camping trip. But then her husband had gone and jumped in front of a bear for her.

Off this revelation, Jo endeavored to help keep Scott in the dark. Neither he nor Rachel needed any more stress at the moment — arguably especially him, since he was about to get his nose replaced on his face. While Jo operated on Rachel with Owen, she asked what he would do if Amelia’s baby turned out to be his. She wasn’t telling tales, mind you, she was just rolling through worst-case scenarios when it came to Alex. Had he reconnected with an old girlfriend? she feared. (Izzie, is that you?) While Rachel recovered, Brian defended himself to Jo. He wasn’t a terrible person, just a person who was terribly in love. So he no longer judged “homewreckers.” At the same time, Scott was taking a major turn for the worse. 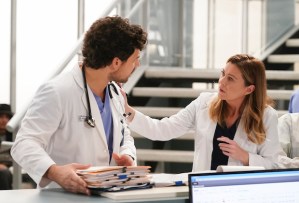 ‘SUFFERING IS BETTER THAN DYING’ | Elsewhere at Grey Sloan, Suzanne, as expected, continued to get sicker and sicker now that she was off all of her meds. “We are not suppressing her symptoms” anymore, Dr. Riley reminded DeLuca. “We are studying them” — no matter how painful for the patient. Later, Mer noted how insane DeLuca seemed since he’d been skipping sleep in hopes of arriving at a diagnosis. He’s “a machine,” Riley assured Grey; she needn’t worry. Uh, “he’s a resident,” Grey shot back. Nonetheless, Riley wasn’t keen on working in shifts. By the time she brought anyone else up to speed, Suzanne could already be dead. Soon, it looked like she might be dead, anyway. As DeLuca grew increasingly frazzled — in a way that reminded his sister of their father’s development of mania — Suzanne began bleeding from the mouth. While that development was being addressed, off her conversation with Carina, Mer approached a very-perimenopausal Bailey with her newly-increased concerns about DeLuca.

At the same time, Riley asked if Andrew if he was still dating his boss. That he was made sense to Riley; it explained the care that Grey had shown for him. Next thing we knew, Bailey was informing DeLuca that Mer was taking over his case, telling him that he should be grateful and ordering him to go home and get some rest. Needless to say, it did not go well. What’s more, Riley was leaving — she wasn’t going to stick around and consult with Grey on what had been her own case. Thankfully, just in time, Riley and DeLuca got some test results that gave them [insert episode title here] for Suzanne: Her white cells were eating her other blood cells! But they’d have to act fast to save her before her organs shut down.

‘YOU GREW UP IN A WOLF PACK’ | Hiding out at home for the day, Amelia received a text from Link asking if she was OK and tea and sympathy from Maggie, who needed reminding that when she had been low, her sorta sis had given her the space that she wanted. But Maggie had grown up an only child; Amelia, as part of a wolf pack. And a wolf only isolates, Pierce knew, when it was curling up to die. So she was taking the day off to spend it with Amelia. In time, the mom-to-be confided in Maggie that her baby might be Owen’s, and she was terrified, because she and Link weren’t just good, they were almost “painfully good.” Now, he wasn’t sure whether he wanted to be with Amelia if the baby wasn’t his (which in turn made her wonder if she really wanted to be with him). “Biology doesn’t matter,” Amelia argued. “Love matters.” After all, she loved Maggie like a sister despite the fact that they didn’t share DNA. Maggie suggested that maybe Link’s fear had more to do with worries about something reigniting between Amelia and Owen than it did a lack of love for Amelia. Sweetly, Maggie also reassured Amelia that, no matter what, she wouldn’t be alone. 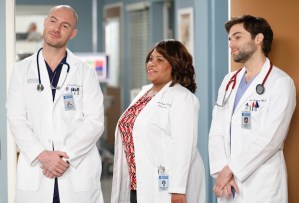 ‘I’M SO SCARED FOR THEM, I’M SHAKING’ | In other twists of plot, Levi was taken aback when Nico begged off going to look at a potential apartment for his boyfriend because his parents were in town — and he also didn’t want Schmitt to meet his folks. At least Levi was distracted for a while treating Joey with Cormac. Elsewhere, Bailey fussed over Richard more than he cared for in the wake of his marriage falling apart. He also had what appeared to be no interest in the lame residents he was tasked with teaching. When Hayes discussed Joey with Bailey, she grew so passionate that she sounded like a prospective adoptive parent. Mind you, all Cormac had been wanting to do was figure out a way to let Joey talk to his siblings. Later, Richard complained to Bailey that that lackluster group of residents hadn’t been Grey Sloan material, so it had felt like Catherine had won. (Was he contemplating retirement or just depressed?)

‘YOU ARE EVERYTHING THAT I NEVER KNEW I NEEDED’ | As the hour drew to a close, Jo reported to Rachel that Scott had died. In response, she recoiled from Brian and tearfully asked him to leave. Immediately, Jo placed a weepy call to Alex, leaving a message in which she pleaded with him to tell her what was going on, because “I’d jump in front of a bear for you.” Cormac brought Joey’s siblings to see him, thanks to Bailey, and they had an awfully sweet reunion. A frenzied DeLuca injected Suzanne with steroids without so much as a discussion with Grey. When Mer hit the roof, Riley came to Andrew’s defense. A commercial break later, Suzanne was doing a million times better. She was going to be fine, Mer reported. DeLuca was so pissed, though, he wouldn’t even go in to let Suzanne and her sister thank him. Mer had taken over the case, he argued, so she might as well take the credit. As she challenged him on his behavior, he went completely off the rails. “I don’t need this, and I don’t need you,” he said. “We’re done.” (Coincidence that he did so in front of Cormac?)

Levi told Nico that he really, really wanted to meet his family. “They’re critical,” said Nico — of him. So much so that he had never told them that he was gay. Naturally, Levi was shocked. Nico had called him a “baby gay,” yet he wasn’t even out to his parents?!? Aaand Link went to Mer’s and learned that Amelia wasn’t going to pick up the paternity-test results — ever. She wanted to raise her baby with someone who loved it — and her — no matter what. In other words, her sisters. “Go home, Link,” Amelia told him. “It’s over.” Just then, Jackson came knocking to apologize for leaving Maggie alone in the woods last season. “Plus, you were right,” he added. “There were bears.” Finally, Mer texted Alex, asking where he was, because she needed him. We saw the bubbles indicating that he was responding, but alas, no reply came.

So, what did you think of “A Diagnosis”? MerLuca’s break-up? Amelia’s decision to dump Link? And what do you suspect is keeping Alex away? Is it another woman? Hit the comments.