You might be sad that Better Call Saul will be ending its run after six seasons, but hey, look on the bright side: We might be lucky we even got to spend that many seasons getting to know Jimmy McGill.

When the Better Call Saul writers first started to tackle Jimmy’s backstory, “we thought he’d be Saul Goodman, as we saw him on Breaking Bad, by the end of the first season,” showrunner Peter Gould tells TVLine. “So the show really surprised us.” But even though the Breaking Bad prequel had a definitive endpoint built into its premise, “we didn’t really have a sense of how we were going to end it… until we were working on Season 5,” Gould admits. As the writers began to map out Season 5’s arcs, “it started to speak to us, and the fog cleared a little bit, and we saw a glimpse of where we’re going to land this thing.” With a super-sized Season 6, Better Call Saul will end up with a total of 63 episodes — one more than Breaking Bad. “That’s just my way of sticking a finger in [co-creator] Vince [Gilligan’s] eye,” Gould says with a hearty laugh. 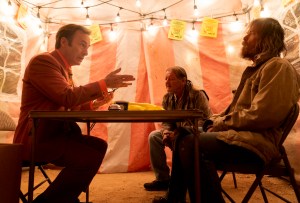 But before we say goodbye to Jimmy McGill, we’ll say hello to Saul Goodman, as Season 5 of Saul — premiering this Sunday at 10/9c on AMC — picks up with Jimmy’s epiphany to practice law under a new name. So should we still call him “Jimmy,” or is he “Saul” now? Even he doesn’t know. “You can actually see the character himself trying to search for how to refer to himself at certain points” this season, Gould notes. “Saul Goodman is sort of a mask that Jimmy McGill is wearing, and I think one of the questions of the show is: Does the mask become the man?” Jimmy certainly has “a bounce in his step again” after a tough Season 4, the EP says, and he can thank his new persona for that: “Sometimes it feels better to be in a costume than in your own street clothes.”

While Jimmy is reinvigorated by his new business opportunities, though, “he’s not really fully understanding the world he’s entering,” Gould warns. “There are all kinds of unexpected, crazy consequences of the very small, seemingly minor choices that Jimmy makes at the beginning of this season.” And based on the look of concern Kim gave him at the end of last season, she seems to sense those crazy consequences looming on the horizon. “I think she has a foreboding of what’s to come,” Gould hints. “I think she has this uneasy sensation that things are going fast. Jimmy’s like a train that’s going so fast that it’s going to jump the tracks. He’s right on the edge of being a little bit manic.” 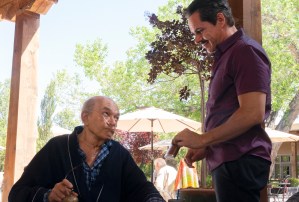 The dangerous world Jimmy is stepping into includes Hector’s nephew Lalo Salamanca (played by new series regular Tony Dalton), who is “a very special combination of charm and joy and sociopathy,” according to Gould. Lalo’s rise in Season 5 is bad news for Gus Fring, the EP adds: “He has a beef with Gus Fring, just as Hector does, but Lalo seems to be a more formidable opponent than even Hector was himself. He seems to have a little bit of a sense of the game that Gus is playing. I think he’s going to turn out to be a hell of an opponent for Gus Fring, and for Mike Ehrmantraut.”

Speaking of Mike, our favorite grizzled old fixer goes to some “very deep, very dark” places this season after he had to kill German lab engineer Werner Ziegler. “Mike is a guy who never lets himself off the hook. He doesn’t make excuses for himself. He takes on the guilt. I think you’re seeing a man who knows he’s committed a murder that he can’t justify in his heart.” Mike’s guilt over Werner ends up dredging up his long-buried grief over his dead son Matty, Gould teases: “I don’t know quite how he’s going to get past it… I think where he’s going is not something that anyone’s going to expect.”

Saul fans, drop your Season 5 predictions in a comment below.