Disney has found an adorable new way to part Mandalorian fans from their hard-earned Beskar steel.

The House of Mouse on Thursday unveiled an animatronic version of The Child, known colloquially as “Baby Yoda.” The toy, now available for pre-order, retails for $59.99 — just shy of the real deal’s reported $5 million price tag.

Per the little guy’s official description: “Touching the top of The Child’s head activates over 25 sound and motion combinations, including happy and excited sounds, giggles, babbles, and more, all while the toy’s head moves up and down, ears move back and forth, and eyes open and close. Boys and girls can pretend to harness the power of The Force as The Child toy closes its eyes, raises its arm, and sighs as if exerting a great amount of energy. Lay The Child toy down and it will close its eyes and take a ‘Force nap.'”

TVLine was on hand at the New York City event to see The Child in action. Press PLAY on the video below to watch the little guy blink, make noise and use The Force:

A Baby Yoda of your very own? Now possible! #TheMandalorian pic.twitter.com/q5QxaIn4fR

In a statement, series creator Jon Favreau commented on fans’ frustration at not being able to purchase Mandalorian loot when the Star Wars offshoot show premiered in November 2019 — or for the holiday season that followed.

“Holding back on product development gave everyone the chance to discover the character affectionately known to fans as ‘Baby Yoda’ together. This is something special in the age of spoilers,” he said. “I am so appreciative of the partnership with the teams at Lucasfilm and Disney who are translating these characters into products for fans to enjoy.”

The Mandalorian will return to Disney+ for Season 2 in October. In the meantime, check out the full photos of the animatronic version of The Child below (click on images to see them in detail), scroll down to see video of even more Star Wars and Mandalorian-related goodies, then hit the comments with your thoughts! 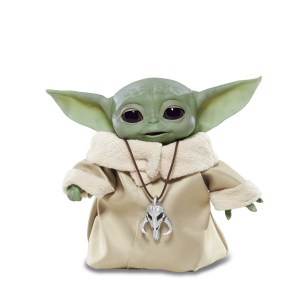 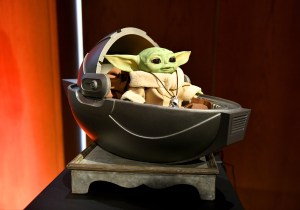