I’ve written about television for too long to ignore the fact that it doesn’t matter if you’re a fictional couple, potential couple or pair of random characters who have exchanged even the most fleeting of glances: Someone, somewhere is ‘shipping it.

So to the Danny/Elliot (Deliot? Elanny?) fandom out there? My condolences. This week’s A Million Little Things is like your Buffy Season 2 finale. Only you’re too young to remember that reference, I hope. I sincerely hope.

Ill-fated preteen love aside, “The Sleepover” is notable in that it continues to explore Gary and Maggie’s post-relationship relationship at a significant crossroads: her six-month scans after going into remission from cancer. I like the slow way the show is handling that couple as they figure out who and how they are as friends. I am less into the chemistry test that may or may not be happening with Gary and Delilah (I started getting suspicious after that scene in the car in the episode where he sees his mom), but I may just be paranoid: As I mentioned before, writing about TV for a while makes you hyper aware of when two characters seem to get thrown together in increasing amounts. Maybe they’re just friends, Kim!

Anyway, read on for the highlights of “The Sleepover.” 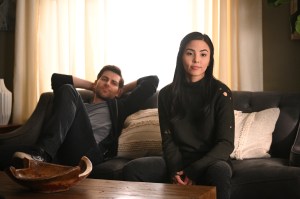 WILL DADDY DO IT AGAIN? | Eddie invites Theo to sit in on a practice session he and Dakota are having at the house. But after watching Eddie and Dakota joke around, T is uncharacteristically rude to the young musician. Eddie and Katherine eventually come to understand that Theo is worried his dad will cheat on Katherine once more, and “I don’t want you to have to go to the Grand Canyon again,” Theo tells her, upset. (Side note: In the kid’s defense, Eddie and Dakota are straight-up flirting during practice. Just sayin’.)

The next morning, Eddie shows Theo the vows he wrote and said to Katherine on their wedding day. That’s a little like a bank robber bringing a copy of the penal code to his court date, but OK? Ed admits he didn’t keep his promise to Theo’s mom and says that will never happen again. Then he points out that Katherine has given him another chance (“FOR WHICH YOU HAVEN’T DONE NEARLY ENOUGH GROVELING,” I grumble at my screen) so maybe Theo can, too? T agrees.

EVE WANTS OUT! | Rome and Regina accompany Eve to her sonogram, where the doctor says the baby is just fine. Though R&R want to know the baby’s sex, Eve balks, so they don’t find out. And when Regina notices some scarring on Eve’s shoulder when her hospital gown slips, she doesn’t pry. Later, they get ice cream (my kingdom for some J.P. Licks!) and drive the expectant mother to her shift at the diner. But as they approach, she freaks. Her abusive ex-boyfriend’s car is parked out front: It appears Derek has found her. 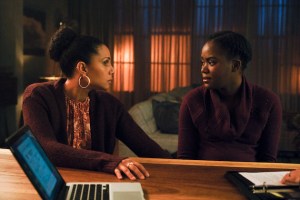 Eve immediately wants to leave town, but Rome and Regina obviously have a vested interest in keeping her in Boston. (What? It’s true. And it doesn’t negate the fact that they want her to be safe and OK.) The mom-to-be explains that the scar on her shoulder is from when he threw boiling water at her during an argument; she doesn’t want him to know about the baby, she adds in a panic, because then he’ll be connected to her forever. While Rome goes to Eve’s place to get her go-bag, Regina tells Eve about what her uncle did to her. Eventually, Eve calms down enough to talk to Katherine about a restraining order, and Regina gets her a place to stay at the women’s shelter. Oh, and because she can’t go back to the diner, she winds up working at Someday. Raise your hand if you’re worried that all of this blurring of boundaries is going to blow up in Rome and Regina’s faces…

MAGGIE MEETS A MILESTONE | Maggie thinks that going for her six-month cancer scans won’t be that big of a deal. But once inside the imaging tube, she has a slight freakout and realizes that she’d rather have a friend around for backup when she talks to the doctor. So she calls Delilah, who is hanging out at her house while Danny and Elliot have a sleepover. Gary is there, as well, and he agrees to keep an eye on the boys — who are sad, because Elliot just announced he’s moving the following week.

Gary also knows she’s sneaking off to be by Maggie’s side: He had the appointment in his calendar from when they were together. He’s glad Mags will have backup, adding, “When you get there, just tell Maggie that I’m thinking about her.” And when our girl eventually gets the all-clear from her doctor — yay! — her joy is cut short by the knowledge that she’ll have to go through the rollercoaster all over again in half a year’s time. Delilah texts Gary that Maggie is A-OK, and the news nearly puts him over the edge with relief. (Side note: Such a great moment from James Roday when Gary is overcome and then tries to stuff it all down.)

The next morning, Danny and Elliot say their sweet goodbyes. Maggie calls Gary to let him know she’s clear, even though she knows Delilah already told him. And Gary tells her that it gets easier “living six months to six months.” The conversation is brief, but supportive and kind. 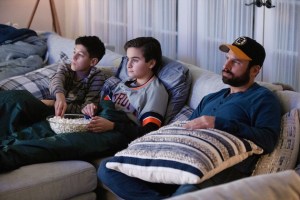 Meanwhile, Delilah has been gloating about how she’s killing it as a mom, deftly handling her gay son’s sleepover with his boyfriend and her daughter’s recent return to living at home. And that’s when Gary informs her that he found a baggie with three joints in it at the bottom of Sophie’s sleeping bag.