Here’s a sentence I never thought I’d type: I have heard a taco sing, and its song was sweet.

But such thoughts were commonplace as The Masked Singer brought out a new group of contestants in Wednesday’s episode, introducing the audience to Frog, Kitty, Elephant, Mouse, Banana and — yep — Taco. Have I been watching this show too long, or were most of them objectively good entertainers?

Let’s muse that, and much more, as we review the performances. 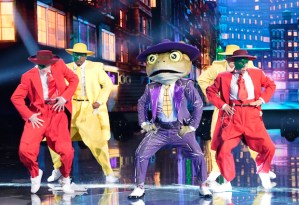 FROG | The zoot-suited amphibian told us he was a “tadpole plucked from a large creek” during his set-up package, which also featured a bag of leftovers, a poster from the 1000-meter event at the 1996 Games (Olympic, I guess?), a microphone and $106 split among three bills. He performs MC Hammer’s “U Can’t Touch This” and despite the fact that I don’t think he actually sang a note the entire time, he worked the crowd and danced his little frog tush off in a way that immediately endeared him to me. (Hey White Tiger? This is how it’s done.) He also had pretty great breath control, which might mean something? (My guess: No clue.) 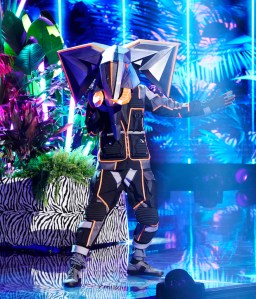 ELEPHANT | The moment Elephant walked on stage, judge Jenny McCarthy Wahlberg observed that he was moving like a skateboarder. I don’t know exactly what that means, but his rendition of The Cure’s “Friday I’m in Love” was earnest and in tune, with a few moves that indicated his joints are well-lubricated (that dramatic fall at the end!). His clues included playing drums, bluejays and a big poster of a bicycle. (My guess: I’m taking myself out of the running for this one, because I had advance notice about this episode’s unmasked singer, and no one likes a cheater.)

KITTY | Kitty is more of a kitten, it seems, based on the judges’ comments about her short stature. Her eyes, or rather the eyes of the costume, are two different colors: Do we think that’s a clue, too? Anyway, she sang “Dangerous Woman” by Ariana Grande and did a really good, rather sultry job. (My guess: Former Dancing With the Stars hoofer Julianne Hough.)

TACO | I know that I know Taco’s confident, mature voice, but I am having a hell of a time placing it, no matter how many times I listen to his very smooth take on Frank Sinatra’s “Fly Me to the Moon.” Given his clues about being “a comforting part of your lives for decades,” and the anchor in his clue video, I’m thinking he’s maybe a TV host (or someone adjacent to that?). (My guess: America’s Funniest Home Videos and Dancing With the Stars host Tom Bergeron.) 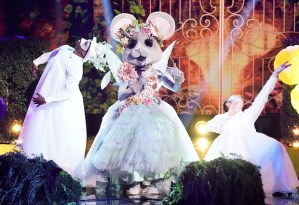 MOUSE | Though the clues didn’t help me much, the moment I heard Mouse sing Oleta Adams’ “Get Here,” I was very sure of who she was. Add in the fact that she moved like an older woman and appeared to need a bit of assistance getting on and off the stage, and… (My guess: Grammy winner and Psychic Friends Network devotee Dionne Warwick.)

BANANA | Big Yellow has a cowboy hat and a blowfish in his clue video, which made at least one of the judges guess Hootie and the Blowfish frontman Darius Rucker. But he’s got a very recognizable, very strong set of pipes, and the man inside the fruit costume seemed winded at times during Elvis Presley’s “A Little Less Conversation.” I wasn’t aware of Blue Collar Comedy Tour before this, but sounds like a good enough place to start, so… (My guess: Comedian Bill Engvall.)

THE UNMASKING | Elephant was unmasked, and he was revealed to be skateboarding legend Tony Hawk. (See what Hawk had to say about his quick Masked stint here!)

Now it’s your turn. React to this week’s unmasking and tell us your current guesses about the rest of the singers in the comments section below!