Very rarely is a time-capsule opening as satisfying as the one that happens in Tuesday’s This Is Us.

You can keep your historic newspapers and cultural touchstones: I’d much rather have a balled-up piece of drawing paper that leads to another clue — small, but significant! — in the show’s ever-evolving flash-forward to what certainly feels like Rebecca’s deathbed.

What did we learn in the time-jump that happens this week… oh yeah, and the 50-ish minutes before it? Read on for the highlights of “The Cabin.”

CAPSULE COLLECTION | A flashback to the time when the kids were preteens shows them supremely disinterested in Jack’s excitement over burying the aforementioned box on the property where the cabin stands. But Rebecca, as always, is a cheerleader for her husband. So the kids slink off to figure out what they want to toss in the box, which will be excavated when Randall, Kevin and Kate are 18. 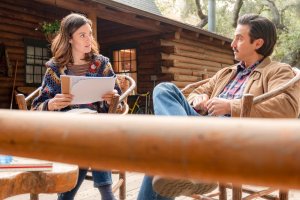 Later, Rebecca finds Jack sketching on the porch. He’s drawing up the design for another house he’d like to build on the property, a larger building with a glass door where he and Rebecca can grow old together. He knows it’s silly; they barely scraped together enough to buy the current cabin and its land. So he chuckles as he balls up the rudimentary sketch and tosses it in the trash, despite Rebecca’s insistence that she knows he’ll somehow make his dream come true someday. (Side note: Anyone else see that sketch and say, “Hey, that looks familiar…”?)

MARC’S FINAL ACT? | In a much more harrowing flashback, we watch Kate and Marc arrive at the cabin in the aftermath of their argument. He apologizes and says he loves her, following it with, “You still love me, right?” She says yes, and things are peaceful until he pulls Jack’s “World’s Greatest Dad” mug off the shelf as they prepare to have coffee. She asks him to pick another cup, because Jack was the only person who’d ever used the mug in question. Marc teases her, pretending to drop it, and then does drop it to the floor, where it breaks into a bunch of pieces. She gets mad. He says it was an accident and tells her to relax. “Great advice from an unemployed record-store cashier,” she shoots back venomously. They argue again. He tosses in a barb about her weight. And when she goes to get firewood, he locks her out without her coat.

A fallen tree closes the road about 20 miles from the cabin, so Rebecca, Randall and Kevin are delayed in getting to Kate until the next morning. Everything appears fine when they arrive — Kate is all smiles, and she invites them to join her and Marc for a pancake breakfast — but Randall soon realizes that the reason the place is so cold is that one of the window panes is broken. Then Kevin demands that his sister take off the gloves she’s weirdly wearing inside; she eventually does so, though reluctantly, revealing a nasty gash on her palm. Turns out, Kate broke the window in order to get back into the house. And when Marc relates the story to her family in a “it’s no big deal!” tone, the Pearsons go on the attack.

Rebecca holds Randall and Kevin back from beating Marc into a stupid-mustachioed pulp but then wheels on the man who has been hurting her daughter. She throws him out of the cabin, informing him that he will never see Kate again, then comforts an ashamed and hurt Kate as she cries. (Side note: I know the show loves giving us sunny Rebecca, but man, do I love me some angry Rebecca.) 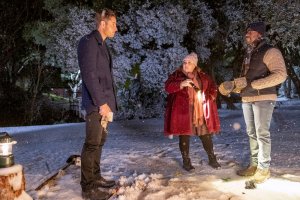 CABIN FEVER | In the present, Randall, Kate and Kevin converge upon the cabin. Despite the fact that Randall is little more than a knee-bouncing raw nerve, he insists “I’m doing much better” than when he called Kevin in tears. He’s putting together a puzzle when his siblings arrive: Jack had it made years before, and it’s a photo of the whole family on a summer day.

KEVIN FINDS OUT | While in the general store, Kate gets multiple voicemails from Madison. Even though Mads and Kevin had agreed not to burden Kate with the knowledge that they shaboinked, Kev’s highly excitable hook-up apparently couldn’t handle the guilt. “Shouldn’t I get some credit for not sleeping with Sophie?” Kev says by way of explanation, but his sister is not impressed. Still, the fallout from this whole situation is not as fraught as I thought it might be, so yay?

Or maybe it’s just that Kate doesn’t have the emotional reserves to be worried about her marriage, her highly strung brother and the adventures of Kevin’s Little Manny. Because back at the cabin, things start to get real. Kate and Kev tell Randall they’re worried about him. He deflects their concern, saying he’s just tired after the break-in, the attempted mugging and his Los Angeles trip. But Kev picks up on the mention of Los Angeles, and when Randall can’t tell a convincing enough lie, Kate comes out with the truth about Rebecca and how they’d been keeping it from Kevin. “Mom didn’t think I could handle it,” he says, angrily storming outside for some alone time, despite the storm.

Kate and Randall want to give him some space, so they continue doing the puzzle… and realize that Jack’s eye is missing. But Randall knows exactly where it is. So he grabs a shovel, and he and Kate go outside to find Kevin: They’re gonna dig up the time capsule.

Once the box is unearthed, The Big Three examines what’s inside. Kate put in a MASH note that said she’d marry Joey Lawrence and live happily ever after. Kevin put in a photo of him and Sophie. And Randall put in the puzzle piece, which Kev had picked for him when Kev’s anxiety over choosing the exact right object rendered him incapable of choosing any object at all.

They also find the sketch of the cabin, which they assume was Jack’s contribution, and an audio cassette they think was from Rebecca. They go inside and play the tape, but it’s Jack’s voice that comes out of the speakers. He explains that he’s pretty sure Rebecca took his crumpled cabin design and used it as her time-capsule submission, which is just evidence of what an amazing wife and mother she is. The whole thing is sad in its ordinariness: When he made the recording, Jack assumed that he’d be there with all of them when they opened the box, so he’s just being his earnestly goofy self and reminding them how great their mom is.

JACK, I AM YOUR FATHER | Meanwhile, back at home, Jack chokes on scrambled eggs Toby makes for him. It’s so scary as the little guy tries to breathe but can’t. Toby Heimlichs his kid, who eventually clears his airway, but they’re both upset and crying afterward. Once the doctor deems Baby Jack totally fine, Tobes takes him home and introduces him to Star Wars by making a big deal out of making the sounds for each character. 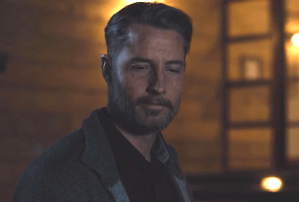 DINNER’S HERE! | Kevin, Randall and Kate leave the next morning, but Kev can’t stop looking at the hill where Jack wanted to build the bigger house. And then we flash-forward to the time period where Rebecca is an old woman (probably) dying in bed. Kevin pulls up to the front of the house — his house — which we’ve seen has a giant glass door, just like its architect envisioned.

He brings in some bags of food and is greeted by Beth, who says everyone is in with Rebecca. This places this part of the flash-forward directly after everything we’ve seen before… and we really don’t find out much more. (Side note: I had forgotten that Toby said Kevin was going for the food, and for a moment, I was like, “IS KEVIN A POSTMATES DRIVER NOW?!” but stand down, everyone, stand down.)

Now it’s your turn. What did you think of the episode? Is there any little clue I missed in the flash-forward? Make sure to check out the flash-forward gallery above — or go to it directly here — then hit the comments and let us know!