I wanted to love Devs. I really did. I’m a huge fan of Alex Garland, the Ex Machina and Annihilation filmmaker who writes and directs all eight episodes of the FX on Hulu sci-fi thriller (debuting Thursday, March 5 exclusively on Hulu), and I couldn’t wait to see what mind-blowing magic he might conjure up on his own TV series. Based on the three advance episodes I’ve seen, Garland’s singular vision is in full effect — Devs contains some of the most stunning imagery I’ve seen on TV in recent years — but unfortunately, the story gets stuck at the starting gate, bogged down by dense tech jargon and a frustratingly cryptic conspiracy plot.

To be fair, Ex Machina and Annihilation were plenty dense and cryptic, too, but both films rewarded our patience with gorgeous visuals and thought-provoking insights about the intersection of humanity and technology. Devs has the visuals down pat, to be sure, but the insight is lacking. It has Garland’s signature chilly and cerebral tone, but the pacing is sluggish. (It feels at times like a two-hour movie idea that got stretched out to fill eight hours.) And while the characters in Garland’s films helped us connect to the brainy material on a human level, Devs‘ characters just aren’t sharply drawn enough to make us care. 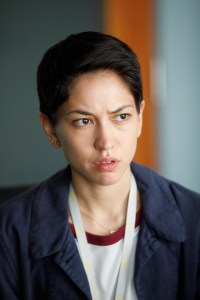 The story centers on lovers Lily (Garland veteran Sonoya Mizuno) and Sergei (Gypsy‘s Karl Glusman), who both work for Amaya, a cutting-edge tech company run by the enigmatic Forest (Parks and Rec‘s Nick Offerman). Sergei gets recruited to join Amaya’s Devs team, where they’re working on a top-secret project known as “The Machine” that might have massive implications for society… but Sergei never comes home from his first day at Devs. Lily is told he took his own life, and is even shown security camera footage to prove it, but she doesn’t believe it, and her search for the truth reveals a nasty darkness behind Amaya’s gleaming facade.

Devs is, as one character puts it, “transcendently weird,” with enough highbrow talk about quantum computing, neuron mapping and multiverses to make your head spin. The technology on display is certainly impressive: “The Machine” does seem to be a true game-changer of unfathomable power and scope. (I’m not allowed to reveal what it actually does — which is fine, because I don’t completely understand it.) It all feels a bit like a dream, or a hallucinogenic trip, and Garland is a true master at creating a sense of wonder and awe with his jaw-dropping visual style. (Amaya’s headquarters is a tech nerd’s paradise, nestled deep in a majestic redwood forest, with sleek buildings standing alongside centuries-old trees and a towering statue of a little girl looming over all of it.) It’s almost enough just to drink in Devs‘ visual grandeur and let its far-out ideas bounce around your brain. Almost.

But the conspiracy subplot acts like an anchor, stubbornly dragging Devs‘ soaring ambitions back down to earth. Lily’s mission to find out what really happened to Sergei is hampered by heavy exposition, shadowy characters and plot twists we’ve seen before on Homeland, or 24, or a hundred other TV thrillers. Mizuno does what she can, but I’d rather spend more time at Amaya and learn more about its incredible innovations than follow another desperate character as she tumbles down another paranoid rabbit hole of puzzle-piece clues. It’s disappointing to see a series with such vast potential get shoved into a pre-fabricated TV drama template. 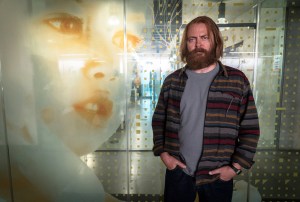 Offerman does get a chance here to show us he’s more than just Ron Swanson: He’s quite good as Forest, the wild-haired and quietly menacing genius behind Amaya. His naturally stoic demeanor fits the tech guru well, and he adds a flash of malice to Forest’s steady stare. It’s otherwise tough to latch onto anything in Devs, though. There’s a fine line between “intriguingly mysterious” and “just plain confusing,” and Devs too often ends up on the wrong side of that line. I “ooh”ed and “ahh”ed a lot while marveling at Garland’s visual flourishes — but watching it ends up being less of a treat and more of a chore.

THE TVLINE BOTTOM LINE: FX’s Devs offers cool technology and stunning visuals, but the plot is disappointingly cryptic and confusing.