Brianna and Roger’s nuptials in Outlander‘s Season 5 premiere truly make me feel like I’m at the wedding of a good friend. And by that, I mean that I marvel at the dress, covet the event space and, on a couple of occasions, think, “Eh, I wouldn’t have made that choice.”

I’ll be upfront with you all: The Fiery Cross, the book on which this season is based and for which this episode is named, is not my favorite of Diana Gabaldon’s novels. (So much Roger, and so many Roger-related mishaps!) That’s why I was pleasantly surprised by how much I enjoyed the first episode back, which brings together so many characters in the celebration of Bree and Rog’s union — yet doesn’t lose sight of the fact that Jamie and Claire are the ones most of us are here for.

Read on for the premiere’s highlights.

Then we cut to Fraser’s Ridge many years later, where Jamie makes sure to don his glasses before grabbing a straight razor and giving Roger a close, albeit slightly menacing shave on the morning of his wedding day. The more I think of it, “close, albeit slightly menacing” is a fairly good catch-all phrase for their relationship, aye? Tensions seem to have eased a bit between the two men, yet the conversation does center on how Roger doesn’t have a profession, so we’ve got a ways to go there still. 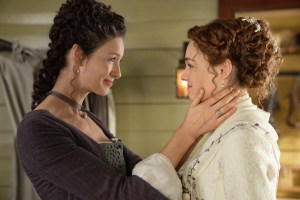 In another room, Claire is all weepy over Bree in her gown. Can’t blame her: The dress is gorgeous. When Jamie arrives, he laments that he and his daughter haven’t had enough time together. “It was going to happen one day,” Claire replies, “and we’re giving her away to a man who loves her.” Then Jamie shares something old, new, borrowed and blue with his kiddo, they drink whisky, and he asks her if she’s ready to get hitched. “Je suis prest,” she answers, citing the Fraser family motto. (Side note: Aww.)

BREE’S NEW BURDEN | It seems like everyone is in attendance: Lord John Grey, Governor Tryon, Aunt Jocasta, Ulysses, John Quincy Meyers all have made the trip, and Fergus, Marsali and Lizzie are there, as well. Jamie sits next to Claire and is scandalized that the service isn’t in Latin, but that ends when Mr. and Mrs. Fraser remember (via flashback) the day they were married. They wind up reciting the “as long as we both shall live” part of Bree and Rog’s vows in unison, and GUH that was as little too syrupy, even for my tastes. Luckily, then the crowd cheers for the newlyweds as they kiss, breaking the moment. Time for a ceilidh!

The evening’s dancing, drinking and eating commence, and everyone’s in a gleeful mood — though Brianna’s face falls a bit when Roger makes mention of re-doing the wedding when they return to their present. And because he is Roger, he doesn’t notice. Everything’s going along swimmingly until Bree accidentally overhears her dad and Lord John discussion how there have been Stephen Bonnet sightings in the province, which is news to her. Poor Brianna has flashbacks to her rape by Bonnet; this news is a huge shock, remember, because everyone thought he’d died in the explosion at the prison last season. But she keeps this highly disturbing discovery to herself, saying nothing when Claire hands her little Jemmy so she and Roger can go dance. (Side note: Did you see how Jem patted his mom on the back? This kid knows what’s up.)

ATTHS X 3 | And now we get to the sex. We’ll start with Jocasta, who returns to her cabin to find Murtagh hiding inside. She confirms that Redcoats attended the festivities, so it’s best that he didn’t show his face. He calls their temporary accommodations “an enchanting woodland palace,” and that’s so charming that of course she has to jump his silver bones.

Up at their spot on the Ridge, Rog and Bree enjoy a rare, child-free night, courtesy of babysitters Claire and Jamie. The newlyweds have a drink and he sings her “L-O-V-E,” then they generally get down to doing what people who’ve just gotten married do. Though she puts on a happy face, Bree clearly is still troubled by what she heard earlier; in the aftermath of their lovemaking, Roger looks rather pleased with himself, while she’s lying on her side and cringing at his touch.

Meanwhile, up at the big house, Claire and Jamie get it on, with her repeatedly reminding him to hush so their grandson — who’s sleeping in a cradle in the next room — won’t wake. The set-up I just described should make the scene decidedly unsexy… but I canna say it does. Outside, the revelry goes on. Marsali tells Fergus she’s preggo with their second kid, which delights him. And Lord John closes out the evening alone again, naturally. 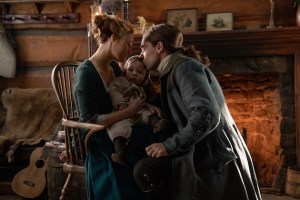 IN WHICH JOCASTA IRKS EVERYONE | The next morning, Jocasta informs Murtagh that Duncan Innes has proposed marriage. “Innes?!” he says, as though the name is a swear. He is UNIMPRESSED that one of his and Jamie’s Ardsmuir men has taken a fancy to the well-heeled widow, but when Jocasta cagily mentions that she hasn’t given Duncan her answer yet, Murtagh doesn’t say what she wants him to. “I’ll no stand in the way of your happiness,” he grumbles, which brings her close to (angry) tears.

But Aunt Jo’s not too upset to mess with Roger a little. She meets with the new Mr. Brianna Randall Fraser to say that she’s going to leave her property to Jem, if only to ensure that Rog will “treat him right because of his prospects.” The whole thing is a con to see if Roger will take the money grab, given that Jeremiah might not be his child by blood (thanks to Bree’s assault).

Roger is incensed at her supposition that he doesn’t love his son. “Let me put this very plainly,” he grits out. “I don’t want your money. My wife does not want your money. And my son will not have it.” He finishes off their conversation by saying, “Cram it up your hole, aye?,” which pleases her to no end. Back at their house, Roger makes a big show of slitting his finger and baptizing Jem as his son by blood, a move that warms Bree’s heart.

RETURN OF THE PLAID | Claire and Jamie discuss the sticky wicket he’s gotten himself into: If he refuses to chase after Murtagh, Tyron will take back the ridge and brand JAMMF as a traitor. So there’s really nothing to be decided: When the Revolutionary War comes, “then I’ll reconsider my vow,” Big Red says. Until then: Claire, fetch me the Box O’ Scots!

Jamie dons his full Highland regalia — kilt, sporran, etc. — and lights a celtic-looking cross on fire, because why not call up a militia in the most dramatic way possible? He explains to the gathering crowd that he is not their clan chief, “But I hope if the time comes, you will stand by my side.” The Redcoats who are still there from the wedding are like, “Um, WHUT?” And because I can’t find a good place to note this anywhere else: I’m all about the shawls Claire and Bree are wearing. And yes, I have said something to this effect every season, and I shall say it until the day this show ends.

Anyway, Jamie calls Roger, “son of my house!” and names him captain of the militia. Seems… like an interesting choice! Then it’s Fergus’ turn; when Jamie calls him “son of my name and heart,” it’s a nice touch. Everyone gets jazzed up for whatever comes ahead; days later, Jamie summons his men for real, and the preparation for a march begins. 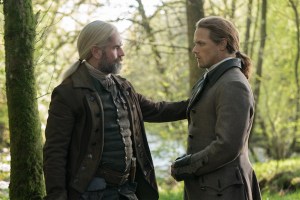 ‘BE HARD TO FIND’ | Later, Jamie meets Murtagh in the woods and tries to convince his godfather to chill with the Regulator stuff so they can both fight on the same side when the revolution begins. Murtagh gruffly — because that’s how he does everything — points out that time-travel has given Jamie everything he ever wanted. And while the older man doesn’t resent him for that, “I must do what I must.”

Jamie kinda knew that was the answer, but he doesn’t love hearing it. Still, he knows that Murtagh is sticking around because of the vow he made to always protect his godson, so Jamie does what he must and releases Murtagh from the promise. “Go,” he says quietly and a little tearily. “Please. Be hard to find.”

Murtagh clasps Jamie’s arm, then walks away without saying anything more. After he leaves, Jamie crouches down in the leaves and cries. (Side note: I thought this scene was so verra well done.)