As you’ll recall, Beth shot Rio in order to save Agent Turner’s life, and while it looked like the deed might save her from prison, Turner then dangled a carrot in front of a dying Rio to strike a deal for help nailing the ladies. A fresh hell surely awaits the women in Season 3, so let’s jump in and break down the premiere.

Beth’s guilt is front and center when we pick back up. “It’s a shock when someone dies,” she says in the opening seconds. “The lights go out, one last breath, that’s it. The end. So quick.” She’s awkwardly rambling to a customer at her new job as a greeting card store clerk. But let’s be real, Beth: We all know Rio isn’t going anywhere, no matter how many times you shot him.

The other “good girls” are working retail or service jobs, which will probably be used to aid their next con. Ruby works at a nail salon, while Annie is a valet. Back at the card shop, though, Beth shuffles her new boss Lucy (House‘s Charlyne Yi) out and opens the back door for Annie and Ruby to slip in. Yep, it’s on. The trio gets to work, dumping chemicals over bagfuls of paper that will soon be counterfeit dollars. They take their work of art to Ruby’s loan-store guy who seems impressed until he finds a couple microscopic inconsistencies. He runs it through his cash counter and the bills are denied. Three weeks of work down the drain. 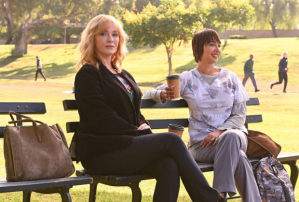 At the park, Beth buddies up to a new BFF, Rhea (Orange Is the New Black‘s Jackie Cruz). We learn that Rhea’s son is living without his daddy, and by the look on Beth’s face, we know exactly who Rhea is.

The episode wastes no time showing us that Rio is alive and well, and is stashed inside a hotel room. Agent Turner arrives to talk about Rio’s plans to disappear, before Rio slips him a piece of paper. “One last name popped up,” he says.

Stan is working a new job as security for some strippers, though he and Ruby tell the kids he’s detailing the mayor. (Their son notes that he smells like Sweetarts.) His new gig, which certainly makes Ruby uncomfortable, helps fund their daughter’s medical needs, so Ruby’s going to have to deal… even if Stan comes home with the occasional lipstick smudge on his cheek. (Occupational hazard? Uhh, sure, let’s call it that.)

Beth takes the gang to meet Lucy, who is an ace of a graphic designer. They need help perfecting their money design, so they fake a “casino night” story to pitch the job. Lucy warns them that if it got into the wrong hands, it could be viewed as counterfeit, which is a felony. The ladies amusingly pretend to be surprised. They agree to print it all on different colored paper, which is enough to appease Lucy. Armed with Lucy’s new design, the women get started on their next batch of “cash.” They bring the new bills back to the loan dude and they pass inspection. Score!

Annie and Ruby arrive at Beth’s to find her hanging with Rhea and her son. They’re not OK with Beth courting the family of their former crime boss, but Beth’s hyperactive guilt leaves her no choice. Meanwhile, Turner shows up to the stationary store to check in on Beth. He asks her about her work schedule — “It’s not easy making an honest living,” he says — and reminds her to “be good” before leaving. She tells the others about the drop-by and they’re all spooked, causing them to burn their counterfeit cash in the fireplace. All that work, up in smoke.

When Beth tells Rhea about being behind on her mortgage payments, Rhea pulls out her checkbook. Since Beth has helped her out so much, she wants to give back, and her baby-daddy set them up with plenty of cash to spare. Beth takes the check, but it just snowballs her guilt.

As the episode comes to a close, Turner and his team investigate the address given to them by Rio, but there’s nothing at the storage unit. As Turner and his team prepare to leave, a black van slowly rolls up. When we cut back to the agents, they’ve all been shot dead, Turner included. Rio, meanwhile, checks out of his hotel as a newly-free man — and he’s got a score to settle.

What do you think is going to happen when Rio and Beth finally come face to face? Grade the Good Girls premiere via the following poll, then leave your comments below!