It remains to be seen if Rio actually succumbed to the gunshot wounds he sustained in Good Girls‘ Season 2 finale, but one thing we know for sure: Christina Hendricks’ Beth, aka the individual who reluctantly pulled the trigger, absolutely thinks he is dead. And that belief drives her to make a controversial new friend when the NBC dramedy kicks off Season 3 on Sunday, Feb. 16 (10/9c).

As previewed in these exclusive images, Orange Is the New Black vet Jackie Cruz has been cast in the recurring role of Beth’s new BFF Rhea, who, not so coincidentally, happens to be… Rio’s baby momma. Beth’s guilt over having murdered Rio leads her to strike up a relationship with the single mom. There’s just one problem: Beth has not told Rhea who she is — a fact that does not sit well with her fellow good girls Ruby (Retta) and Annie (Mae Whitman).

Teases series creator Jenna Bans: “When the other girls find out about Rhea’s past, they question Beth’s motives for befriending her.”

As we reported back in August, NBC ordered three additional episodes of Good Girls, bringing the show’s Season 3 haul to 16. That’s up from Season 2’s 13 episodes and Season 1’s 10 episodes. Additionally, House alum Charlyne Yi is joining the cast as a quirky artist with “mildly impaired social skills” who assists the girls with their new counterfeit money scheme. 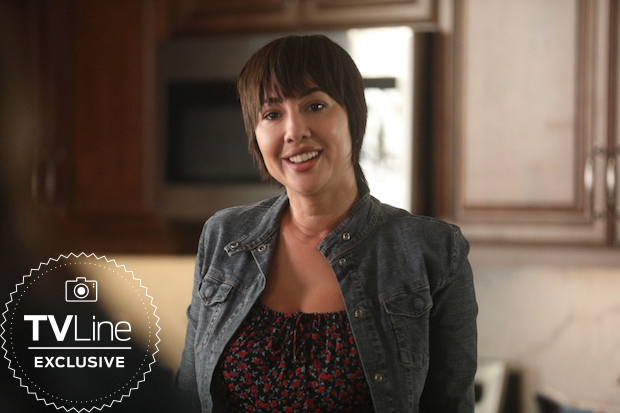