Does Mike Baxter have what it takes to lead his wife’s political campaign toward victory?

Thursday’s Last Man Standing (Fox, 8/7c), directed by series star Tim Allen, finds Vanessa (Nancy Travis) formally announcing her run for State Assembly — but before she does that, she has to pick a campaign manager. While Mike throws his hat into the ring, Vanessa ultimately goes with next-door neighbor Carol (recurring guest star Tisha Campbell), whose ideas don’t mesh with Mike’s.

In the lead-up to Season 8’s 10th installment, Allen spoke with TVLine about the balancing act of directing and acting, his evolving stance on infusing real-life politics into the show, and whether Last Man would ever attempt a live episode, a la The Conners.

TVLINE | This is the third episode that you’ve directed. Was there anything distinctive about stepping behind the camera this time that set the experience apart from previous installments that you’ve helmed?
I’m getting more and more comfortable… In sitcoms, there’s a formula [to directing], and formulas can change, but it’s very difficult. I like camera shots, [and] there are a couple shots in there that I don’t want to [give away] because I don’t know if they made the final edit. I’ll edit [the episode], then they’ll re-edit, then I’ll get one more shot, and then they’ll cut something out — sometimes it’s for time, and sometimes they don’t quite agree with a particular camera move. 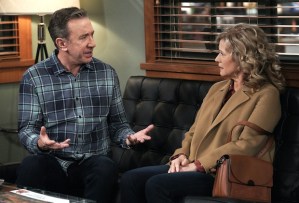 TVLINE | How do you keep the process of directing interesting for yourself while working within the confines of a three-camera sitcom?
It’s difficult. Because I’m the actor, I play, in geometric terms, on the same plane all the time. You can’t turn certain directions. It’s a theater play, so you have to get creative in your spatial moves. The only thing I can add is making the camera move a little bit [more] and getting it out of position. Sometimes I will [move] up the set a little bit. Sometimes it works and sometimes I see that it’s a little off-putting, and the shot becomes the star. I don’t want that, but I want perspective. I enjoy what you don’t see [as a viewer], and I love working with our Emmy-winning lighting director Donald A. Morgan on lighting the background. It adds depth. It’s like a rich stew. The texture [is] all I got in a sitcom, and I really love it.

TVLINE | Typically when an actor steps behind the camera to direct, they’re in the episode a bit less. But that’s not the case here…
They screwed up. [Laughs] It was funny, because there was one [episode] before this or after this on the writing chart that I was looking at, and then I wind up getting [an episode] where I’m in it almost every scene. Everyone’s just sitting [on set] real quiet, and I go, “What’s the matter?” “Well, you’ve gotta get in there!” And it’s like, “Oh s—t, I have to go in there and act now.” But I love it, and I really appreciate that I can do both.

TVLINE | When you’re directing, do you opt to shoot less in front of a studio audience?
No. They said, “You can do pre-shoots,” but I don’t like them. I love performing for the audience. This was a little difficult because I’m standing out there and Dave Cove, who is our Assistant Director, he’s the one who’s actually doing it. He’s calling the shots once I’m in the scene and I’ve got it all set up, and I got to do a few where it’s me calling action, and that’s gratifying. But it’s because I have a good team that [I] can actually do it quite well without me actually at the helm for [my] scenes. 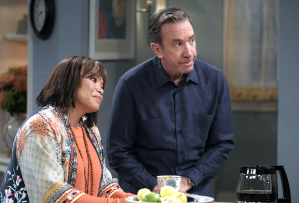 TVLINE | In the episode, Vanessa turns to Mike and Carol for advice on her campaign. What sort of suggestions does Mike offer his wife, and how do they differ from what Carol advises her?
[Mike] knows marketing, but he also knows his wife. And what I love about this character is that he’s this big, bravado guy who is married to a woman that he adores, and he has these three daughters, so he is more attuned to a feminine perspective — whether he knows it or not. He wants Vanessa to be organic… Mike is asking, “Who is the real person? What do you want out of this [campaign]?” And Carol wants her to be somebody that she isn’t, and it’s a much easer sell. But essentially it’s about Nancy Travis, and she had to find in the character of Vanessa, “What message do you want?” She’s a listener, and she wants to do the right thing. (Watch an exclusive sneak peek below.)

TVLINE | This episode is political, but not as overtly topical as the show has been in the past. Assuming the show is renewed for Season 9 [which is “a safe bet”] are you hoping to be back on in the fall versus midseason, so the show can comment on the presidential election like you did in 2012 and 2016?
The disadvantage of [being on in the fall] is that you’re not on for four or five weeks, between the [World Series], Thanksgiving and Christmas… We all figured [2016] was going to be a really fun year because Hillary Clinton was going to be president, and we thought, “Oh wow, this is going to be different.” And we didn’t jump on the anti-Trump thing because the station that we’ve pulled into [at Fox] really was, if not pro-Trump, is at least OK [with him]. And so we’ve been able to skirt that and just sort of move on… We’re going to have fun with whatever comes up next.

TVLINE | Surely, though, Mike has a few opinions he’d like to get off his chest…
[Mike] is a conservative businessman that has a big, union staff, so he’s got both [sides] that he’s dealing with… and we’ve been able to skirt this, and play along with it, and glide over it… Any dig that we throw in about the government — he likes to make fun of the state of California, as do I… any digs about kale and all that — is what a funny conservative that loves his liberal friends would joke about.

TVLINE | Another popular broadcast network sitcom, ABC’s The Conners, just staged a live episode. Any interest in doing a live episode of Last Man Standing?
We would love it. Everyone on our show would do it. We’re getting closer and closer to doing it almost live on [tape night] anyway. We’re so well rehearsed, we’ve got such pros on both sides of the SAG fence — the actors and the crew — that we could do it.