Live from Lanford, it’s The Conners!

During the East Coast broadcast, Mark was settling in to watch the results of the primary for a school report. This happened as an angry Dan was heading up to fix the leaky roof, leaving the front door open and everyone inside freezing. The whole family was gathered in the kitchen, all wearing their coats, deciding what to eat for dinner. This transitioned into a discussion on Mark’s assignment and the importance of elections. During the conversation, big sister Harris walked in and expressed disinterest in the electoral process; she opined that money’s influence in politics means that real change is impossible. Jackie then suggested that Harris should be excited because it’ll be the first time she gets to vote in a presidential election. Becky, meanwhile, stressed how important it is to vote for a “really terrible” candidate in order to ensure that a “really, really terrible” candidate doesn’t come into power. 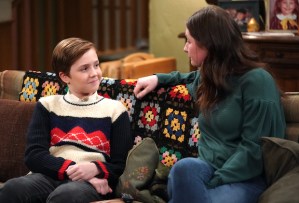 Later, Mark was seated in the living room watching the primary results on ABC. Harris entered and attempted to take Mark’s laptop to prepare for her GED and nearly broke it, which resulted in a fight between brother and sister. During the argument, Mark yelled at Harris for moving out and leaving him to deal with the family on his own. He then confided in her about an issue he’s been having with his (sort-of) boyfriend Austin, who has yet to come out of the closet. Harris urged her brother to “Boy, bye!” this Austin fella, and to come to her when he needs advice on boys.

The episode also followed up on Dan’s relationship (or lack thereof) with Louise. As you’ll recall, Louise told Dan that her band was offered a chance to take their show on the road. She was willing to pass on the opportunity if Dan was ready for romance, but the widower expressed uncertainty, so she broke up with him. When Darlene, Becky and D.J. found out that Louise was leaving for three months, they decided to intervene by throwing Louise a surprise going-away party in order to get her and Dan in the same room. When Louise and Dan realized they’d been set up, Louise made a beeline for the front door at Casa Bonita. She refused to talk to Dan, or let him drive her home. 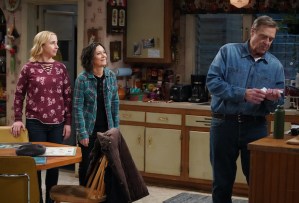 Later at the house, Dan yelled at Darlene and Becky for interfering in his love life. He then revealed that he’s been having a hard time getting over Roseanne. He said a priest had advised him to write — and then set fire to — a letter to Roseanne about how guilty he’s been feeling about potentially moving on with Louise. He had been planning to do just that in two weeks, on the occasion of Roseanne’s birthday. Darlene and Becky encouraged their Dad not to give up.

In the final scene, Harris received a phone call from telemarketer who sounded a lot like Hillary Clinton. The person on the line urged her to vote this fall. The Clinton impersonator turned out to be Jackie, who was calling from the laundry room. Jackie then entered the kitchen and explained to Harris why she should vote. “Some of these people are trying to help you,” she said. “Warren and Sanders want to pay for your college tuition; Yang wants to give you $1,000 bucks a month; and Biden wants to decriminalize marijuana.” Those last couple of points hit home with Harris, who responded, “Wow. If I ever get to college, I am going to need some weed and spending money. Ok, I’ll vote for them.”

What did you think of The Conners‘ live episode? Grade it via the following poll, then sound off in the comments.