Like her brothers before her, Kate Pearson’s latest portion of torment has arrived: Welcome, everyone, to This Is Us‘ “A Hell of a Week: Part Three.”

Series star Justin Hartley directed the hour, which follows Kate as she argues with Toby, attends a retreat for differently abled children (and their families) and learns about her mother’s memory issues. Then in flashback, we watch Kate and Marc’s relationship swerve into Very Troubling territory; we all knew it was coming, but — and I don’t mean this in the Twitter sense of the phrase — you hate to see it, regardless.

This trio of episodes has been quite the downer, eh? It got me to thinking: Which of The Sad Three had the unhappiest episode? My rundown is: Randall >  Kate > Kevin, but be sure to share your rankings of the poor Pearson kids’ crises in the comments. 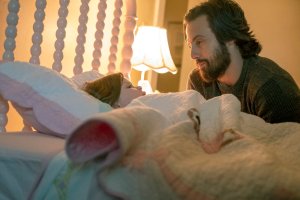 KATIE-GIRL’S BEDTIME TALE | A flashback to Toddler Kate’s first night in her big-kid bed shows Jack telling her a story — or, rather, they tell one together — to get her to fall asleep. It’s very cute and all, but the gist is that Jack was little Kate’s ideal prince, and her mom was her ideal prize. Moving on!

A RETREAT, AN ADVANCE | AT 11:17 Pacific Time on the same night that Randall nearly tripped over the man who broke into his home, Kate and Toby are reading in bad. He’s ecstatic, flying high on the knowledge that Baby Jack can see light and shadow, if nothing else. Kate gently points out that the therapies he’s researching online don’t really apply to their son, who likely never will regain a significant portion of his eyesight. Then the conversation segues into Toby’s comment about how Jack’s blindness just makes him sad. Toby doesn’t want to discuss any of it, though. “I would just like to have one night filled with hope,” he says wearily. “I am excited, and I am not ready to let go of that feeling yet.” So Kate backs off, but there are tears in her eyes.

They’re supposed to leave for the retreat the next morning, but Toby is super preoccupied with work as they’re preparing to leave. So when Rebecca calls to check in, Kate announces that Toby’s not coming on the trip. Tobes is surprised to hear this… but he also doesn’t protest his wife’s decision. At all. Anyway, Rebecca is going to go in his place, so yay!

At the hotel where the retreat is being held, Kate is excited to see all of the ways that Jack will be able to enjoy his childhood like kids without disabilities. But she’s also afraid to go in the communal pool with her son — lest people gawk at her size — and worried that maybe her marriage is imploding?

Rebecca is about to tell her daughter about her memory problems when Kate confesses everything that’s been going on at home. So Rebecca listens, but then she makes a decision: They’re going swimming, even though the pool is closed and Kate is uncomfortable. “You’re fat, I’m ancient, we’re gorgeous!” Rebecca protests, telling her daughter to hurry up and put on her suit.

IT’S LIKE RAIN ON YOUR WEDDING DAY | In the water, Rebecca reminisces about how Kate was always such a sensitive kid, remembering how she lovingly held fireflies in her hands and then gently sent them on their way. But “just because you’re sensitive doesn’t mean you’re not strong,” Mama Pearson reminds her daughter, adding that Kate needs to not be afraid of telling Toby that he needs to “step it up.” She finishes by saying that Kate absolutely is strong enough to raise Jack on her own, “but I believe in Toby. He’ll find his way home.”

Then Rebecca tells Kate about her diagnosis of mild cognitive impairment and the possibility that it will lead to dementia or Alzheimer’s disease. Kate is, understandably, shocked and upset. But Rebecca says she’s done being sad and worried, and that knowing what’s going on in her brain has made her feel “more powerful and more fun.” Along those lines, they get dressed and cart a sleeping Jack to the hotel bar, where they sing karaoke of Alanis Morissette’s “Ironic.”

ANSWER WISELY, TOBY |Back at home, Kate takes her mother’s advice. “Can you do this?” she asks Toby. “Can you be the man I need you to be? Can you be the father Jack needs you to be?” His answer is a weaksauce “I want to.” (Side note: COME ON, TOBY!) Just then, Kevin calls and patches through Randall, who’s having that anxiety attack in his bathroom. They make plans to go to the cabin that weekend.

Kate hangs up and announces to Toby that she’s taking Jack with her, but he tells her to leave the baby with him. “I need to spend time with my son,” he says, and she reluctantly agrees. 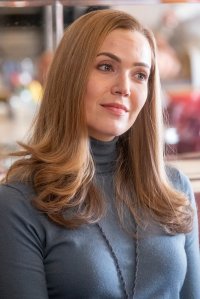 MARC IS THE WORST | If you’re looking to the “Big Three as Young Adults” flashback for some levity… you won’t find it here this week. We’ve already had hints that Kate and Marc’s relationship is not the healthiest, and that plays out in real time as he gives her a gift at the record store where they work, then admonishes her for eating chocolate and gets really pissy after she dares to share some of her knowledge to answer a customer’s question.

The phone call we’ve seen in previous episodes happens when he finally makes contact after ghosting for a while; it’s so hard to hear her apologize and say things like, “Tell me what I did wrong” when we know he’s the actual asshat. They make up, and he’s still planning to come to her mom’s birthday dinner. But a worried Rebecca, trying to play it cool, wonders if the three of them can have coffee ahead of time so she can get to know Marc better.

That meet-up does nothing to assuage Rebecca’s fears, given that Marc is a rude, complaining jerk from the get-go. He announces that he quit the music store — this is news to Kate — and that he and Kate want to write songs together “but we just gotta get out of Pittsburgh to write ’em.” Kate suggests the cabin, which hasn’t been opened for the season yet. “That is an idea,” Rebecca replies, and if you’ve ever had a mother, you know that her “NO HELL NO” couldn’t have been clearer if she stood on the table and shouted it.

The next morning, Rebecca tells Kate she’s not comfortable with the two of them going off together. Kate correctly susses out that her mom doesn’t like her boyfriend, and she launches into a tirade about how he’s the only person who’s ever liked her romantically, a position Kate could never understand. Then she leaves. 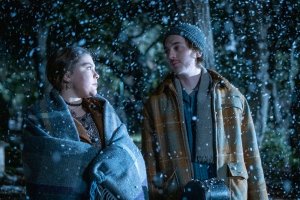 THAT’S COLD | It’s all fun and Ben Folds Five sing-alongs in the car until Marc gets mad that Kate isn’t planning to quit the record shop, too. He drives faster and more erratically in a snowstorm as he bemoans her lack of support, skidding all over the place until she cries and begs him to stop the car. She suggests they get some air… but when she gets out, he spits, “I can’t even look at your fat face!” and speeds away.

She walks to a gas station and calls Rebecca from a pay phone. Kate apologizes for saying mean things before she left and admits that things aren’t OK between her and Marc. But before she can elaborate, he pulls up and gets out of the car, holding out a blanket to wrap her in. So Kate says goodbye to her mom and goes back to Marc, who apologizes and puts his arms around her. It’s still snowing when they arrive at the cabin.

But back in Pittsburgh, Rebecca knows something is Not OK with her daughter. “We have to go get her,” she tells Kevin, and he puts that plan into action.