This week on The Good Doctor, Carly grapples with her jealousy over Shaun and Lea’s continued friendship, while Morgan’s worsening condition takes its toll in the operating room.

After an early-morning quickie — or, as Carly puts it, a “pre-dawn romantic interlude” — Shaun and Carly are late to work. Carly wants to discuss the timing of their rendezvous over lunch, but Shaun has too much to get done. What he doesn’t divulge to his girlfriend is that his to-do list includes lunch with Lea. As his former roommate chomps down on a salad, she tells him that she has decided to quit her cushy startup job. She’s been stuck in a rut and she needs a change.

Meanwhile, back at St. Bonaventure, Shaun, Morgan and Lim treat social-media influencer Kayley (played by 13 Reasons Why‘s Chelsea Alden). When Shaun saves her life, he gains unwanted notoriety. The hospital wants to take advantage of the situation and prop Shaun up in front of the press, but the medical marvel doesn’t want to commit to an interview. Even if he did, he says, he doesn’t have the time — what with work and all the sex he’s having with Carly! That’s exactly what he tells Glassman before he switches gears and suggests that his mentor hire Lea to help digitize the clinic. Glassy is hesitant, but agrees to consider Lea if Shaun will reconsider talking to the press. And so, the following day, Glassman has Lea in for an interview as a favor to Shaun. He and Lea agree that they’d kill each other, but Lea proves her worth when she bypasses the clinic’s firewall to show that patients’ sealed records are at risk of being intercepted. 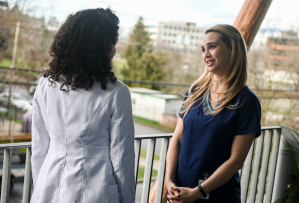 Elsewhere in the hospital, Shaun asks Carly out to lunch. He wants to pick her brain and see what she thinks about talking to the press. Once he gets his girlfriend’s opinion, he tells her that he’s on his way upstairs to see what Lea thinks. He then lets slip that he saw his bestie for lunch yesterday. Carly is visibly upset, not just about the lunch, but that Shaun has arranged for Lea to work at the hospital, where she can hover over their relationship. Shaun defends himself, saying that there was no reason to tell his girlfriend about the lunch before now. He also defends arranging a job interview for Lea; if she gets the job, she’ll be working all the way on the other side of the hospital. Carly eventually steps out for air and talks through her feelings with Morgan, of all people. Morgan says that Carly has every right to be jealous of Lea, then suggests that a little bit of jealousy is good. “Give into it, then get over it,” she says to her.

Eventually, Carly confronts Shaun. She acknowledges that Lea is a good friend, and she doesn’t want her boyfriend to cut Lea out of his life. With that being said, going to Lea for advice “was like Wyoming all over again.” Shaun is able to make sense of Carly’s feelings, then tells her that they’ll work through this together. As for talking to the press, he ultimately decides against it. He tells Glassman that he considered all the arguments, and he wants to be known as a good doctor, not a good autistic doctor. 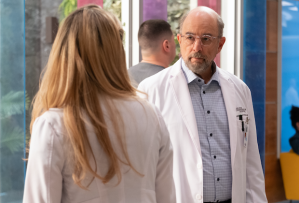 As for Morgan, her conversation with Carly comes prior to Kayley’s surgery, on which she has been chosen by Lim to take lead. While outside, Morgan experiences pain in her hand; her rheumatoid arthritis is flaring up again. Rather than confess to Lim, she scrubs in for surgery and the patient suffers a complication. Morgan finds a fix, but the complication might have been her doing. Later on, Glassman confronts the third-year surgical resident and surmises that her arthritic pain caused the screwup.

Morgan also stirs up trouble outside the O.R. this week — or so we’re led to believe. Outside the hospital, she spots Melendez and Claire on a mid-afternoon run. In a subsequent scene, Lim walks into Melendez’s office and shuts the door. She tells him that there’s something awkward they need to talk about: “You and Claire.” Melendez gets up from his seat and tells his ex that she can open the door, because there’s nothing remotely improper going on between him and Dr. Browne. That’s when Lim reveals that she has received an anonymous favoritism complaint, and they need to deal with it.

This all happens amid the backdrop of a Case of the Week involving a single mom who uses her daughter’s stool to do a home fecal transfer. (The line “Mommy drunk my poop” will haunt my nightmares for weeks to come.) This disgusting twist turns out to be a blessing in disguise, as Mom’s abdominal pain forces the doctors to run tests on her daughter’s stool. The results reveal that the child has serious, yet treatable cardiac problems that have quietly plagued her up until now.

What did you think of The Good Doctor Season 3, Episode 14? Hit the comments with your reactions.