This week on The Good Doctor, Shaun and Carly work toward intimacy, while Claire continues to grapple with Breeze’s death — and finds a good friend in Melendez.

The episode begins at the loft and picks up some time after Shaun promised Carly that he won’t live with Lea. While it would seem only fair that Shaun find a new apartment, it’s Lea who has packed up her belongings. She tells Shaun how much she’s going to miss him, then Shaun reiterates just how much he loves Carly. “Now you can hang the toilet paper incorrectly anytime you want, and Carly and I can go back to the way things were before our fight,” he says. But Lea isn’t so sure. “Sometimes couples need a little time to recover,” she tells him. 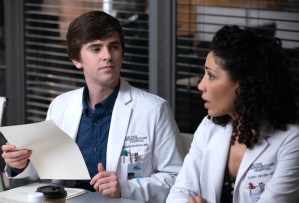 At the hospital, Lim, Shaun and Morgan work on James, a long-distance runner with lymphedema. Because of a genetic mutation, his body is not responding to medication — and if they don’t find a medication that works for him, he’ll drown from the inside. Because of the unique nature of the case, Lim asks Carly to come up from the lab and lend the team her expertise. “This is exciting,” Shaun exclaims. But Carly is used to samples and slides, not patients. Shaun tells her that she’ll be fine.

The following night, Shaun and Carly head back to his apartment. Shaun is finally ready to have sex, but Carly puts a stop to it. “Did I do something wrong?” Shaun asks. “No, I’m sorry,” Carly replies. “It’s me.” Before they can have a real conversation, Shaun receives a page from Morgan: James has suffered an upper G.I. bleed. They head back to the hospital, where Carly suggests a path forward: They’ll use zebrafish to test myriad genetic mutations in order to figure out which medicine James will best respond to. Lim gives Carly the go-ahead, then Shaun accompanies his girlfriend to the lab, where they have a larger discussion about what went wrong in the bedroom.

“I told Lea to move out like you wanted. You said that things were OK. They aren’t. How do I make them OK?” Shaun asks. “I can’t tell you because I don’t know,” Carly answers. “I thought I was ready for us to be together, but my body had a different response… I can’t turn that response off any more than these fish can control how their mutation reacts to the medication.” Carly confirms that the “mutation” in their relationship was his trip to Wyoming, but she’s confident that they’ll find the “right medication” to overcome this barrier to intimacy.

Soon after, James takes another turn for the worse. Lim comes to Shaun and Carly and asks what medicine will give James a fighting chance. Shaun and Carly’s zebrafish experiment has narrowed the field considerably, but the MDs still have five potential remedies — and Carly has the final say. Worried that her decision might cost James his life, she heads down to the pathology lab and has a good cry. “He’s not a slide, he’s a person — a good person and he might die,” Carly tells Shaun. “This is why I like to stay in the lab.” But Shaun thinks she’s looking at this the wrong way. “If you had stayed in the lab, James would probably be dead already,” he says. “Your plan with the zebrafish gave him a chance. It was a beautiful, perfect idea from a beautiful, almost perfect person.” (D’aw!)

The couple eventually makes their way back upstairs, where Morgan catches up to them. “Nice call on the zebrafish,” she tells Carly. James is OK. Shaun takes Carly’s hand and they head home. “Did we fix our mutation?” he asks. Yes, she nods. We then cut to Shaun and Carly in bed. Carly is fast asleep, and Shaun’s got a goofy grin on his face. They’ve finally consummated the relationship.

While Lim’s team works on James, Melendez’s team works on Ryan, a teenage cancer patient who met his girlfriend, Angie, while they were both in chemotherapy. Claire sees how in love Ryan and Angie are, and tells Melendez that she “wouldn’t mind being an idiot like that again.” (Hmm…) Soon after, the doctors discover that Ryan’s treatment has worked, and his tumor has disappeared; he won’t need surgery. While he and Angie embrace, Angie collapses and starts seizing. Her cancer has returned, and her prognosis is not good. She’ll have to go under the knife and miss out on prom. 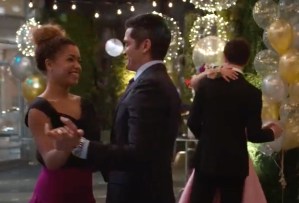 In the wake of Angie’s cancer reoccurrence, Angie’s mom prevents Ryan from visiting with her daughter. Claire, who worries that Ryan’s absence will depress Angie and affect her surgical outcome, gets the OK from Melendez to do what she can to make the patient happy. That’s when Claire decides to stage an impromptu prom at the hospital, with an assist from the surgical attending. At the makeshift dance, Melendez notices that Claire is glowing. “Looks like you may be feeling a little idiotic happiness right now,” he says. “Just a touch,” she replies. He then asks if she’d like to dance with a former prom king. (It’s a friendly gesture, but it’s also a tease for all those #Melendaire ‘shippers out there.) Moments later, Angie’s mom shows up with a teddy bear. She sees her daughter from afar and looks overwhelmed. Rather than bring the teddy bear inside, she hands it to Claire and heads home.

The following morning, Melendez and his team take Angie into surgery. They are joined by Dr. Glassman, who makes his first appearance in the O.R. since his own cancer setback in Season 1; he’s not there to operate, but to lend his expertise to Melendez and associates. Unfortunately, the brain tumor is immobile, and they can’t resect it without injuring Angie’s nerve tracts; if they remove it, she’ll be comatose. They close her up and send her to the ICU, where she ultimately suffers a fatal seizure. Claire and Melendez head out to tell Angie’s mom, who breaks down in front of them. Ryan walks over and realizes that Angie’s mom has just been dealt tragic news, then approaches Mom and wraps his arms around her.

Later that night, Melendez catches up to Claire. She’s visibly upset, but it’s not about Angie — at least not entirely. She’s mad at Breeze and thinks she’s in the wrong. She’s convinced herself that she can’t be mad at someone for dying. Melendez assures the resident that she has every right to be mad at Breeze because “she left you alone, after you spent a lifetime trying to take care of her.” Claire tells Melendez that she’s been angry at Breeze her entire life, and now that’ll never change. Melendez tells her that time and therapy will help, then reveals that “one other thing” that has always worked for him: a late-night run.

Melendez isn’t the only one who’s there for Claire this week. Midway through the episode, there’s a rather great scene between Claire and Shaun. After she asks how he’s doing in the wake of his dad’s death, she reveals that she recently lost her mom. She also tells him that she hasn’t had a single positive thought about Breeze since her tragic demise. “It’s OK not to love them,” Shaun says. “They didn’t make us who we are.” 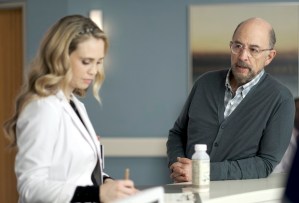 We also get an update on Morgan’s rheumatoid arthritis. She checks in with Glassman and tells him that the Methotrexate is doing wonders for her R.A. There’s just one problem: It’s causing her extreme bouts of nausea. Glassman suggests they switch her meds, but all she cares about is that her hands aren’t bothering her anymore. He eventually finds out that Morgan is puking at work, and she’s avoiding solids altogether. This, of course, isn’t a permanent solution — especially now that she’ll be spending long hours at the hospital working on a research paper with Andrews. And so, at the end of the hour, she visits Glassman and asks him to prescribe something other than Methotrexate.

What did you think of The Good Doctor Season 3, Episode 12: “Mutations”? Hit the comments with your reactions.