While sparks flew between Owen and his new lady friend on Monday’s 9-1-1: Lone Star, not everyone in firehouse 126 was quite so lucky in love. If you’ve seen the episode, you know we’re referring to Paul, whose first date with a woman since moving to Austin ended with a handshake… and an apology. (And if you haven’t seen the episode, turn back now. Spoilers ahead!)

Despite hitting it off with a woman he rescued from a strip club brawl — a typical meet-cute scenario in the 9-1-1 universe — Paul was initially hesitant to ask her out. As a transgender man, he had quite a bit more to consider than his cisgender co-workers, including whether the object of his affection would even be open to dating someone from the trans community.

“There’s this belief sometimes from people who haven’t lived the trans experience that’s just like, ‘You should tell everyone. You owe it to them,'” actor Brian Michael Smith, who is also transgender, tells TVLine. “But the truth is, you don’t know how people are going to respond. And many people don’t even have the language to talk about what their trans experience is, or what it could be. People who are trans don’t owe you their entire history right out the gate, just like you wouldn’t walk up to someone and tell them your medical history. You build trust.”

Speaking of trust, it wasn’t until T.K. confessed to getting being dumped by his ex-boyfriend that Paul felt comfortable sharing his own insecurities about dipping his toe into the dating pool. Not only was this a huge moment for Paul, but as Smith explains, it speaks to a lack of vulnerability and openness in many male friendships.

“It showed that this brotherhood is deepening and getting stronger,” Smith says. “They’re having guy talk and being more open and vulnerable, enough where Paul felt safe enough to say, ‘This is why I’m scared.’ He shared his story with guys who may not understand his exact experience, but they understand pain and rejection. We as guys may have different entry points to our sense of manhood and masculinity, but we’re going through similar things. We have more in common than our differences would suggest.” 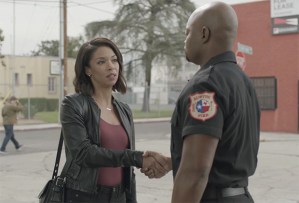 Paul did eventually ask Josie out, leading to a night of beers, bowling and banter. But when Josie suggested they continue things back at her apartment, Paul said there was something he had to tell her. We didn’t actually witness the subsequent conversation, but when Josie showed up at the firehouse the next day to apologize for her reaction, the writing was on the wall.

“I kind of like that [we didn’t see Paul and Josie’s initial conversation],” Smith says. “It left room for the audience to think about it. They’ve spent so much time walking in Paul’s shoes, so now they can wonder what he’d say and how she’d react. I love that we left it up to the audience to think about that and to get an understanding of how challenging that conversation might be for a trans person.”

Despite finding Paul “thoughtful, charming and sexy as hell,” Josie told him, “I guess I’m just not as evolved as I thought I was. I’m not a terrible person. I really do like you. I just don’t think this is something I can get past. I’m sorry.”

“It’s heartbreaking for him,” Smith says, “but it definitely shows a reality. I appreciated that [Josie] was able to be honest about her feelings, and that she was able to take ownership of her poor reaction. She stuck to her truth, rather than pretending that things were cool, only for the truth to come out later on. I love that she apologized, not for her feelings, but for her reaction. And even though that romantic part didn’t manifest, Paul did get a closer relationship with T.K. and Carlos. So he struck out in one way, but he won in another.”