THE PERFORMANCE | It’s been days, but we still haven’t recovered from this week’s harrowing Chicago P.D., during which Squerciati delivered a performance that was so emotionally raw and physically brutal that, to be honest, it was difficult to watch. In the events leading up to her character Burgess tragically losing her unborn baby, Squerciati threw herself into the physicality of the storyline. Doing nearly all of her own fight choreography, the actress used every part of her body to retaliate as Burgess was violently attacked by the leader of a sex trafficking ring. With every awful punch, slam and toss by her assailant, Burgess’ desperation and determination was palpable in the anguished cries that Squerciati so heartbreakingly delivered.

After shooting the ringleader, Burgess didn’t think of her own safety, but that of the underage girl in the water-filled bathtub. As the officer went to rescue the young woman, Squerciati rose to the challenge of yet another difficult physical sequence, dragging her own limp body into the tub to pull the girl out of the water. When her ex/baby daddy Ruzek finally arrived on the scene and frantically asked if she was OK, it was clear from the way Squerciati was clutching her stomach in pain and barely holding back tears that Burgess most definitely was not.

“I don’t know, I don’t know. Help me, please,” Burgess tearfully pleaded, Squerciati’s voice quaking with emotion, as Ruzek scooped her out of the tub. Folding herself into her ex’s embrace and crying out, the badass cop suddenly became so very vulnerable. But when the doctor told Burgess that she lost the baby, Squerciati delicately reined in her emotions, a mask of numbness covering her face as she stared out the hospital window. And while her gaze could have been completely blank, Squerciati let us in enough to see the pain and sadness underneath her character’s devastating loss.

HONORABLE MENTION | Chris Wood was a sight for sore eyes on Thursday’s Legacies, even if he spent most of the episode threatening to murder some of the CW drama’s most beloved characters. Maybe that’s because Kai Parker, a villain first introduced on The Vampire Diaries in 2014, has also become one of the franchise’s most beloved characters, thanks in no small part to Wood’s charismatic take on an otherwise irredeemable monster. There’s something truly unnerving about his effortless ability to pivot between playful and menacing, fully embodying each extreme as needed. A scene stealer in every sense of the word, Wood slipped back into character as if no time had passed, exceeding even the most skeptical fans’ expectations — and raising the bar for all future Legacies villains. 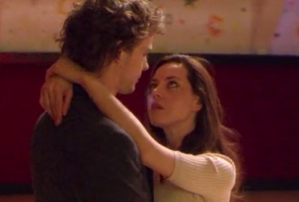 HONORABLE MENTION | It’d have been a shame if Criminal Minds wrapped its run without a final visit from Cat Adams, but luckily for us, Aubrey Plaza popped up this week with her most entertaining turn ever. As Cat manipulated “Spencie” into another date night, Plaza toggled from psychopath to flirty femme, never leaving us to doubt that she is truly hot for the FBI genius. As she explained after feeling slighted during their roller rink excursion, “I didn’t ask for one last family visit [before being executed], I didn’t want one final meal. I wanted this.” Later, when tormenting Reid’s not-a-girlfriend Maxine, Plaza was having all the fun in the world, even segueing into an impression of the ladies’ shared nerd, before plainly stating the “outcome” of her and Reid’s previous, violent run-in: “And the next day I miscarried. The end.” Our hearts then broke when Cat told Spencie that she did what she did so that, as the lethal injection went into her arm, there’d be “the slightest chance that maybe you’re still thinking about me.” 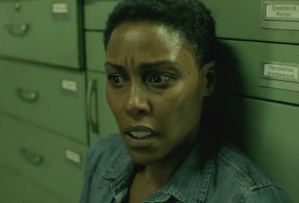 HONORABLE MENTION | Though Lynn Pierce’s Green Light addiction has been a rough storyline to witness on Black Lightning, it’s been a fine showcase for Christine Adams. And with Lynn’s abduction and relocation to a musty Markovian lab, Adams was given much to sink her teeth into, especially when Colonel Mosin disclosed that her addiction had been orchestrated by the ASA! Feeling helpless while pressured to do the colonel’s bidding, a despondent Lynn shrugged, “It doesn’t matter. Nothing does,” being in this grim situation and so far removed from family. And yet she still exhibited some spunk, as evidenced by her reciting a recipe for cookies, instead of the formula Dr. Jace sought. (“I would rather die than help Mosin weaponize metas,” she growled.) Of course, Mosin taunted his captive with a sweet Glimmer fix, wanting her brain at its sharpest. As Lynn eyed that tainted prize, before finally, begrudgingly taking it, Adams conveyed the life-or-death dilemma at hand.