Power‘s series finale is coming for us like death comes for anyone under the protection of Assistant United States Attorney’s office: Whether you like it or not, it’s gonna happen.

And ahead of Sunday’s final episode (Starz, 8/7c), we can’t help but keep turning Season 6’s central question over and over in our minds. Ultimately, all we want to know is whether James “Ghost” St. Patrick was murdered by his estranged wife Tasha, his vindictive son Tariq or disgraced AUSA Cooper Saxe?

Though there were several other suspects in the mix as recently as January, the second half of the season has narrowed the pool of potential killers to the aforementioned trio. The others — Tommy, Tate, Paz and Dre — all have been exonerated in recent episodes.

Below, we lay out the best arguments for each potential killer. 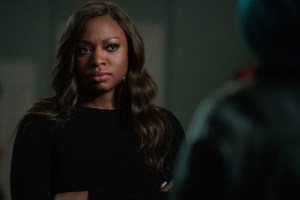 THE CASE FOR TASHA | What’s that they say about a woman scorned? Tasha has plenty of reason to hate Ghost, her longtime partner in both marriage and business, who strayed in their marriage the moment his high school love, Angela, re-entered the picture. While Ghost chased his dreams, both professional and political, Tasha was left to raise their children, handle the books and deal with constant scrutiny from the Feds. She’s also never forgiven Ghost for the death of their daughter, Raina, or for allowing their son Tariq to follow in his father’s illicit footsteps, or for killing her lover, Terry Silver… the list goes on and on. Plus: Remember when he physically attacked her earlier this season? Add to that the fact that Tasha has already killed someone with whom she used to be close (R.I.P. LaKeisha), and we could totally see Tasha shooting her husband in order to stop him from inflicting any more pain on their family. 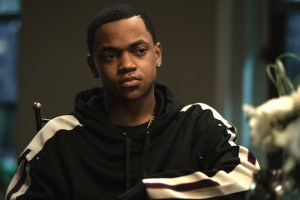 THE CASE FOR TARIQ | Like his parents, Ghost and Tasha’s teenage son also has blood on his hands (though Ray Ray wasn’t exactly an innocent victim), so we know he’s capable of doing the deed. And the time he spent under Kanan’s wing certainly emboldened ‘Riq to do whatever he wants, damn the consequences. Over the years, we’ve watched him morph into a talented liar, a cunning strategist and a stone-cold player of the game: Remember how he didn’t ask Tommy to stop his plan to kill Ghost, only to give Tariq a heads-up before he went through with it? And now that Ghost wants to distance himself from Ray Ray’s death by having Tariq take the (rightful) blame, what’s stopping the younger man from putting some lead in his pops and eradicating that problem for good? 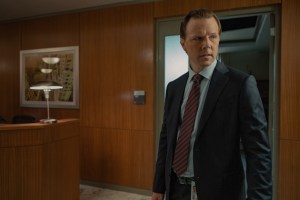 THE CASE FOR SAXE | Admittedly, the argument for Saxe as The Man Who Snuffs Out Ghost is a weak one: The former AUSA is two-faced, deceptive and sneaky, but a killer of one of the most ruthless drug bosses in town? It’s tough to picture. Before you cross Saxe off the list for good, though, remember this: Ghost is at the core of every problem Saxe has had in the past six seasons, including his dismissal from his federal government post, and Ghost and Tommy just beat the snot out of him and made him think that he was going to die in his living room. Everyone has their tipping point, right? Maybe we’ve finally reached Saxe’s.

Examine the evidence, then make sure to log your own vote for #WhoShotGhost in the poll below. And head to the comments with any other theories, questions or observations you’d like to make regarding Ghost’s untimely — but not unexpected — demise.