In case it wasn’t abundantly clear from the multiple voiceovers and use of Taylor Swift’s Big Apple anthem, Katy Keene — The CW’s Lucy Hale-led Riverdale offshoot, which premiered on Thursday — takes place in New York City. Well, a version of it, anyway.

Katy Keene presents a candy-coated New York, the kind of place where it feels like your dreams are always coming true — even when they’re not. And with its infectious optimism and relentless positivity, Katy Keene is also a welcome reprieve from the gloom and doom of its parent series.

But enough gushing, let’s dive right into Thursday’s premiere. Katy Keene picks up a few years after the titular designer’s latest visit to Riverdale. She’s now juggling a demanding career at Lacy’s department store with an overactive social life and a side hustle as a seamstress. She’s basically living her own version of The Devil Wears Prada, only her live-in boyfriend is way hotter and far more understanding of her busy schedule than Adrian Grenier ever was to Anne Hathaway.

Now let’s talk about Katy’s job, which is somehow incredibly stressful yet also has oddly low stakes. She’s working as an assistant for legendary personal shopper Gloria Grandbilt, who’s basically a 1940s caricature brought to life (and we love her for it). Katy is actually really good at her job, beloved by all of her co-workers. Case in point: She literally steals a pair of shoes from the window dresser to give to a client and he’s just like, “Oh, well. That’s Katy!”

Actually, I should say that Katy is beloved by most of her co-workers. Broadway’s Helene Yorke (aka one half of Comedy Central’s brilliant The Other Two) plays a ruthless troublemaker named Amanda, the Emily Blunt in Katy’s Devil Wears Prada fantasy, who craftily screws her out of a major promotion. Katy isn’t thrilled about being demoted to the stockroom, but it only takes a few hours for the window dresser I mentioned earlier — you know, the one whose shoes Katy stole! — to offer her a new gig in his department. Crisis averted!

Speaking of crises being averted, Katy promises her hot boxer boyfriend that she’ll move to Philadelphia with him if she doesn’t land her promotion. As he explains, he’s been on the wait list to train at a big-time boxing gym, and his number is finally being called. But when Katy’s plans fall through, yet she still says she doesn’t want to move, he’s totally OK with it. In fact, he gets down on one knee and proposes to her!

At times, Katy Keene feels like a mashup of a few different shows (all of which we would happily watch on their own). While she’s busy living her best life at Lacy’s, Katy’s roommates are off pursuing their own dreams. So let’s check in with a few of those people, shall we?

JOSIE MCCOY | “I’m from Riverdale. It’s the murder capital of the world. I’ll be fine,” Josie tells her new roomies, which actually turns out to be an understatement, as Josie is way more than just “fine.” In her first week in New York, she’s discovered in Manhattan Square Park by millionaire Alex Cabot, who not only takes her to bed (yowza!) but also gets her in front of some key players at a major record label. Granted, they all reject her — one old white man in particular gives her a “hard pass” — but it’s not a bad start.

JORGE LOPEZ | Meanwhile, Katy’s other roommate is living in his own version of Smash/Pose/Tootsie. After being turned down for a spot in the chorus of — I kid you not — Mannequin: The Musical, Jorge decides it’s time go to give up his Broadway dreams. But with a little encouragement (and a lot of bedazzling) from Katy, he returns to the audition stage, this time as his drag alter ego. Unfortunately, the director shows even less interest in “Ginger” than he did in Jorge, inspiring an impassioned speech about how he’s going to see the name Ginger Lopez in lights someday. “Carnegie Hall, bitches!” Exit stage left.

PEPPER SMITH | Katy needs to design this girl an even bigger purse to fit all of the names she keeps dropping. I’m honestly torn, because I feel like Pepper could be a very likable character, but the pilot presents her as a less funny version of Tahani from The Good Place. Maybe my opinion will change once we get to know Pepper a little better, but right now, she seems like the odd (and oddly successful) friend out.

* Which is less plausible, that all of these 20-somethings are familiar with the movie Mannequin, or that Katy actually lives off bodega sandwiches?

* Is it bad that I was glad the director wasn’t swayed by Ginger’s big speech? It’s not that I didn’t think she deserved to book the show, but it was nice to see that trope subverted, even slightly.

* I thought I was done talking about Pepper, but I guess I’m not. What is her job, exactly? She’s described as an “it” girl who gives TED Talks and writes New York Times columns and looks for funding at Art Basel and parties in Mykonos with celebrities… but what is her job?

* At the risk of perving out, can we also take a second to discuss the gentlemen on this show? If either of these guys met Archie Andrews, they’d be like, “Do you even lift?” (Come to think of it, the next crossover will absolutely involve K.O. and Archie boxing, right?) 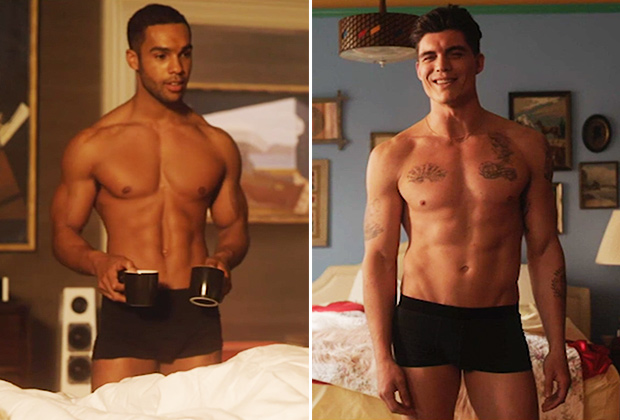 What did you think of our first outing with Katy & Co.? Grade the series premiere in our poll below, then drop a comment with your full review.