Brooklyn Nine-Nine‘s Season 7 premiere reveals that Holt is one week into a year-long stint as a uniformed officer. While he’s back to walking the beat alongside new partner Debbie Fogle (SNL‘s Vanessa Bayer), new interim captain Julie Kim (Bring It On‘s Nicole Bilderback) is installed to oversee the precinct.

Before her introduction, Jake and the squad discuss how fast they expect Holt’s latest replacement to flame out, at which point Rosa casually mentions that she has the weekend off, and won’t be there to meet Capt. Kim. “You think you can have the new captain gone by Monday?” she asks. “I’m kind of over meeting new people.”

After that, Detective Diaz is gone for the rest of the episode… which is a bit odd, isn’t it? TVLine thought so, so we asked series co-creator Dan Goor about portrayer Stephanie Beatriz’s whereabouts.

“We were accommodating her [shooting schedule on In the Heights],” the upcoming film adaptation of Lin-Manuel Miranda’s Tony Award-winning musical, he revealed. “We were so excited that she was able to do a movie with Amy’s brother!

“At least we got her in the cold open,” Goor adds, and “it was the only episode that was affected.” 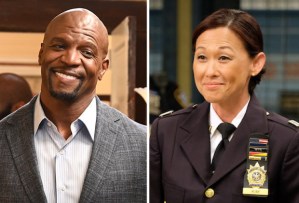 Luckily for Rosa, Kim is practically chased out of the Nine-Nine. The super-nice captain attempts to ingratiate herself with the rest of the squad by having them over for a dinner party, which Jake and Holt proceed to wreck amid their efforts to uncover a nonexistent, sinister agenda. By the time Monday rolls around, Kim has already requested a transfer. In her absence, Lieutenant Terry Jeffords will be forced to step up, much like he did during the manhunt in Episode 1.

“We decided not to do a revolving door of new captains,” a la Murphy Brown‘s assistants, Goor says. “Though that was an idea we talked about, in the end we decided it would be [more] fun to explore the dynamic of Terry being in charge.”

What did you think of Brooklyn Nine-Nine‘s latest short-term captain? Grade the back half of Season 7’s double-episode premiere, then sound off in Comments.