Two events that desperately need to happen do happen in this week’s A Million Little Things, and both come as a gigantic relief.

The first: Gary visits his mom, realizes that she’s not the monster he imagined (though she’s still kind of a garbage person), remembers that he’s been a Bitter Betty about everyone/everything lately and starts to make nice with Maggie.

The second: Maggie finds out that Eric doesn’t actually have her brother’s heart beating in his chest. And that scenario unfolds as you might guess it would.

Plus, Marcia Gay Harden and Sutton Foster guest-star, and Rome eats a cocktail shrimp in the most amazingly baller way ever. Read on for the highlights of “Guilty.”

HAVE YOU NO HEART? | Let’s deal with Maggie’s crisis first. When Eric won’t answer her calls, Mags stops by his apartment and realizes that he’s in the process of moving… and hadn’t told her. He talks about how he wants a fresh start, and that moving out of the place he shared with Chloe would be a good first step. He also tells her about the lawsuit Gary discovered in the last episode: Chloe’s parents are suing him, blaming him for her death.

A chagrined Maggie apologizes for kissing him, explaining that it’s complicated to have feelings for someone who’s in possession of your loved one’s vital organ. Still, she maintains, it felt like they had a connection. “Am I wrong? Is it just me?” she wonders, but Eric sadly says no: He felt something, too.

That’s when Maggie, who’s been wandering around the apartment in her nervousness, notices a framed photo of him, shirtless, taken on New Year’s Eve 2017. “Where’s your scar?” she asks, looking at him as though she’s never seen him before. Eric tries to explain, but Maggie doesn’t want to hear it. She leaves in haste. 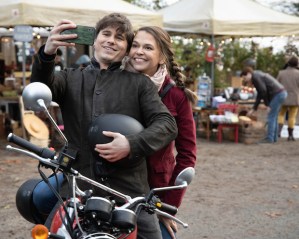 ERIC’S ADMISSION | Eric makes a beeline to Maggie’s apartment, but she won’t open the door for him. So he stands outside and tells her the truth. Yes, Chloe (the aforementioned and delightful Foster) was his fiancée, and yes, she was very badly injured in that motorcycle accident (which we saw via flashback at the top of the episode). . But she’d had the heart transplant six years before, which was the day that Chad died. (Side note: I totally did not get the time element involved there — thanks to all of you who pointed out my mistake in the comments.)

So Eric and Chloe were at the hospital the day Chad was brought in, but it was because they were waiting for a donor heart, which she sorely needed.

“The best day of my life was the worst day of yours,” he tells Maggie. And when the donor network contacted Chloe, Eric got the letter and developed a kinship with Maggie’s mom. Or, as Maggie puts it, “So you lied to her.” They’re both crying on opposite sides of her door as he tells her that “my feelings for you, our connection, that was real.” Then he leaves.

HIT THE ROAD | Meanwhile, Gary has reached the “eating potato chops, lying on the couch and watching bad legal thriller movies” stage of his sulk. Eddie, Delilah, Rome and Regina all converge on his apartment in an impromptu intervention: Apparently, when he’s really low, he watches a film called Quincy’s Lie so he can yell at the actress who plays the jury foreman… and that actress just happens to be his mother, Alice. (Side note: Harden is doing some impressively bad acting on purpose in the movie-within-the-show, and it’s hilarious.)

Gary brushes off everyone’s concerns, but Delilah isn’t having it. “After a certain point, Gary, the problem isn’t everyone else. The problem is you,” she tells him, gently but firmly. It works. “You think I don’t know that?” he replies, more hurt than anything else. She points out that he might not want to talk to his mom, but he might need to — and oh, look at that, Alice is starring in a play in Brooklyn right now!

When D suggests a quick road trip to deal with Gary’s mommy issues, Rome is instantly on board: His producer friend, Jerry, stole his script and is getting it made into a movie, and Rome wants to chat with him about it real quick. On the way, Gary muses that he hasn’t seen his mother in person since she abandoned him when he was 7. And that bears out, because when he approaches her via the autograph line after her matinee, she doesn’t recognize him until he says his last name. 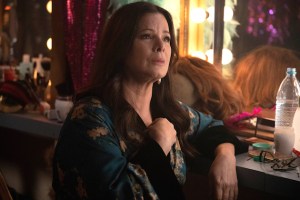 ALICE IS KINDA THE WORST | Gary and Alice retire to her dressing room, where she tries to explain how overwhelmed she felt as a 20-something new mom. He angrily asks why she never came back, but she says she did: She watched him play hockey with some friends and thought she would’ve wrecked his peace if she got out of the car, so she turned around and left. “I smiled with some friends, and that was enough to convince you I didn’t need you?” he says, incredulous. She apologizes and begs him to let her try again, perhaps starting with dinner after her evening performance? Gary reluctantly agrees.

But when a big producer shows up, Alice asks if Gary will take a raincheck so she can woo the bigwig into putting her show on Broadway. I can’t tell what’s more grotesquely selfish: the request, or the self-involved way she ignores how let-down her son is by her actions. P.S.: Your play isn’t the next Hamilton, lady! Gary leaves, and she barely notices. 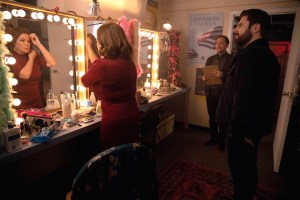 In the car, Gary comes to terms with the fact that his mom was always awful, and it wasn’t his fault that she abandoned the family. Then he apologizes for treating Delilah & Co. so badly. He’s just about to get out and go into his apartment when Maggie calls D.

A THAWING? | But instead of Delilah, it’s Gary in the hallway when Maggie opens her apartment door. “How much did Delilah tell you?” she asks. “Enough,” he says, eyes soft. “I’m sorry.”

They chat a bit, and Gary says he’s sorry for being insensitive to her need for closure (see also: the whole megillah with the psychic). Then Maggie asks him to get dinner, but he backs off and says he can’t stay. He does add, however, that he could’ve handled himself better (“IN SO MANY WAYS,” I yell at my TV), then he leaves. After the door closes, though, he pauses in Mags’ hallway for a minute or two. That’s gotta mean something, right?

ROME’S REVENGE | Wondering what happens between Rome and Todd, the producer friend he’d shared his script with? Todd starts out denying that he stole the work from Rome — though he totally did — then winds up berating him for being an “ideas” guy who never actually gets things done. So based on something Rome overhears while in the producer’s waiting room, he crashes Todd’s dinner with the big-deal actor he’s wooing to star in the film. 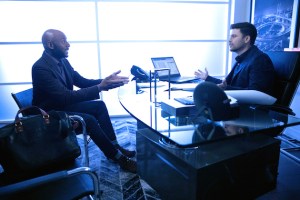 Rome chows down on a cocktail shrimp plucked off their seafood tower as he explains what happened by adds that he doesn’t even mind, because Todd can’t really steal Rome’s story, because it’s Rome’s story. Later, the big-deal leading man (hi, Being Mary Jane‘s B.J. Britt!) calls Rome and says that he’s interested in the original version of the script — and that he just might want to produce the movie, as well.

And while everyone is off in New York, Regina has lunch with her mom to tell her about Rome and Regina’s decision to adopt. Her mom is uncharacteristically happy about it… until Regina starts talking about wanting to adopt a child that looks like her and Rome. The grandma-to-be takes offense at this, interpreting it as though she did a terrible job raising Regina, who admits that her mixed heritage meant she never felt like she fit in anywhere. Later, though, Regina’s mom apologizes for pretending race wasn’t an issue for her daughter, and they hug.