It really is a pity: All of those woolly legs, yet not one left to stand on when it came to the elimination on this week’s The Masked Singer.

Yep, Llama got the boot at the end of Wednesday’s episode. And I was sad to see him go: White Tiger’s off-key warbling and cornball dance moves are getting old fast, and I’d much rather have seen that cat take a hike (though the judges seem to looooove him) than to have the woolly weirdo pack it all in.

Ah well. Read on for a quick recap of the performances (and to find out who was under Llama’s big ol’ head). 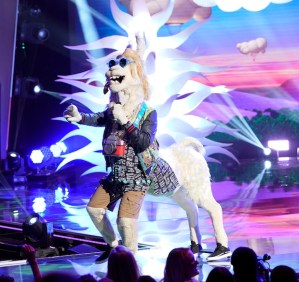 LLAMA | This week’s clue package establishes Llama as someone whose career was stalling before he learned to envision his success “and to think on my feet”— like a stand-up or improv comedian, perhaps? He was playing an accordion in the montage, as well. And I realized this week that Llama wears a camera around his neck — all of these cemented my guess before he sang a single note of Tom Jones’ “It’s Not Unusual.” The performance bopped right along, and he carried the tune well (if not expertly). (My guess: The Price Is Right host Drew Carey.)

WHITE TIGER | We’ve already established that White Tiger is my least favorite competitor this season, so all I’ll say is that something about the way he sings the repeated “C’mon!” in Marky Mark and the Funky Bunch’s “Good Vibrations” infuriates me in a way that even his half-assed flossing does not. “You could’ve muted the song, and it would’ve been an incredibly entertaining performance,” judge Robin Thicke said afterward. He meant it as a compliment, but it really wasn’t. Clues in the video included: a skiing cow, a book called Wild World of Cats and the big cat saying, “Dancing heals my body after taking a beating.” (My guess: Former Patriots tight end Rob “Gronk” Gronkowski.) 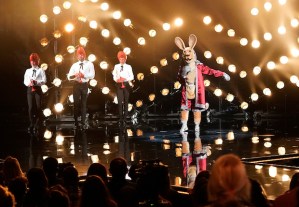 KANGAROO | Kangaroo’s clue package started off with her on the basketball court, which got guest judge Jason Biggs (Outmatched) thinking about the theme song to The Fresh Prince of Bel-Air and guessing that the marvelous marsupial was actually that show’s Tatyana Ali… whose talents, as showcased during her time as Ashley Banks, included a strong set of pipes. Then she mentioned that she wants to be a role model for “my little ‘roo,” and it certainly seems like new mom Ali is a good guess. Her performance of Amy Winehouse’s “You Know I’m No Good” was impressive, as well. (My guess: Ali.)

TURTLE | The Shelled One’s falsetto was once again on rather nice display during James Arthur’s “Say You Won’t Let Go,” which is as pretty a song about vomiting as I’ve ever heard. You can tell Turtle has experience building a song through its emotional climax; that, along with a handful of nods in his video set-up (and some incredibly fervent comments from readers of last week’s recap) have me changing my mind about his boy-band past. (My guess: Summerland and All My Children alum Jesse McCartney.)

THE UNMASKING | When Llama is unmasked, he’s revealed to be Carey.

Now it’s your turn! What did you think of the episode? Did this week’s clues change your mind about any of the performers? Let us know in the comments!