Brooklyn Nine-Nine‘s Raymond Holt has been sidelined before — so what makes his current demotion any different?

At the end of Season 2, the captain of the 99th precinct was forced to leave his post behind and take a desk job in the NYPD Public Relations Department, which proved temporary. Then in the Season 3 finale, Holt and Jake entered witness protection to avoid the wrath of mob boss Jimmy “The Butcher” Figgis. They spent six months in Florida before they returned to the Nine-Nine, at which point Holt was reinstated.

More recently, Madeline Wuntch (recurring guest star Kyra Sedgwick) placed Holt on patrol duty after she learned that her archnemesis served only one month as a beat cop before he moved up to detective — and now that she’s acting commissioner, there’s no one above her with the power to reverse said decision. As a result, Holt finds himself stuck in a menial position in Season 7.

“It was very important to us that we didn’t just do a thing at the end of last year, and then immediately reset the world at the beginning of this year,” series co-creator Dan Goor tells TVLine. “While it’s true that we’ve had Holt at the end of the season be stripped of his captaincy [before], this is different. His dynamic with the rest of the squad has changed, and he is in their presence for the duration.

“It’s not just that something bad happened to Holt, and he’s off on an island or off with Jake doing something,” Goor continues. “This guy who was the boss is now the lowest [ranking] member of the squad.” 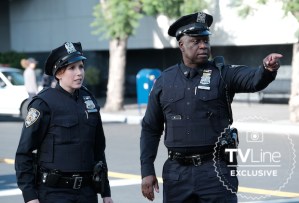 This, of course, changes how Jake and Holt interact on a professional level. “They’re adjusting to it with some difficulty,” Goor reveals. “Interestingly, I would say Jake is probably having more trouble with [it],” since he’s now in a higher position than his longtime superior.

The change in hierarchy also takes its toll on Holt’s psyche. “[He] is struggling to maintain the dignity that he normally wears proudly,” and he is “frustrated by all aspects of his new position.” That includes being partnered with quirky officer Debbie Fogle (played by SNL‘s Vanessa Bayer). “Holt is not… very accepting of her foibles,” Goor says. 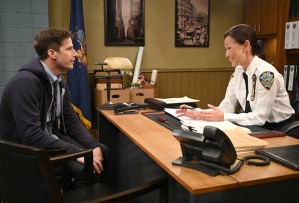 Holt also has concerns about his successor, Captain Kim (Bring It On‘s Nicole Bilderback) — and he’s not alone. “On first appearance, she seems to be unbelievably nice,” Goor previews. That makes it “harder for Jake and Holt to figure out… who she is and what her motives are.”

Brooklyn Nine-Nine’s Season 7 premiere airs at a special time, Thursday at 8/7c, followed by a second, standalone episode in its new 8:30 pm time slot. Watch an A-Team-inspired promo below, then hit the comments with your thoughts on Holt’s demotion.